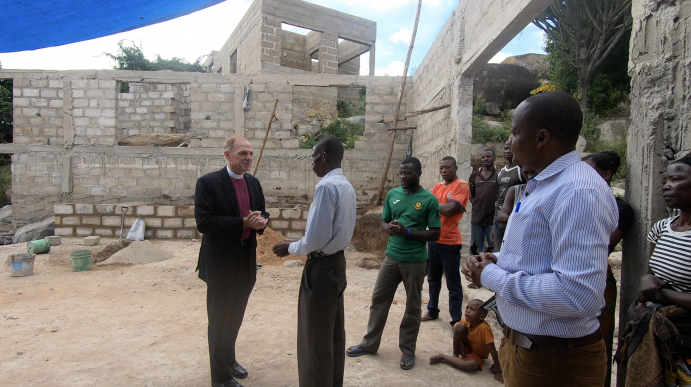 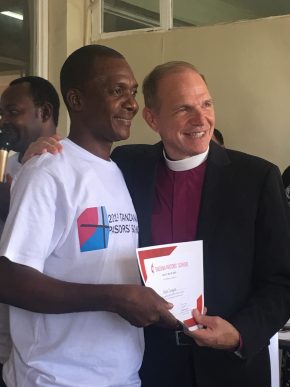 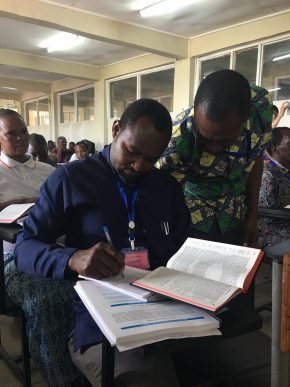 At the top of a dusty, rocky hill overlooking Lake Victoria, the people of the Nyegezi United Methodist Church welcomed Bishop Schol and a team of leaders from GNJ who had come to Tanzania to lead the Local Pastors’ School. The Nyegezi church building, nestled among the signature rock formations of Mwanza, was a shell of concrete blocks and a small tarp was propped in one corner where the congregation would gather to worship.

While the women of the congregation served their guests cold drinks, the men split large boulders which will fill in the foundation of the sanctuary. The pastor explained that the congregation had grown from a small gathering of seven worshippers to one of over 40.

To the leaders of Greater New Jersey, this church symbolized how United Methodists in Tanzania were growing the church. The new church building was being constructed as a form of evangelism. The people of Nyegezi saw the construction as a sign of the permanence of the church. The space itself attracted new worshipers and changed the experience this religiously diverse community held for United Methodists. The construction was being carried out by the members of the church as a form of stewardship and generosity. Every worshiper in the church was expected to contribute, to haul supplies up the winding cobblestone road, to split rock and build the foundation or to provide refreshment for those who were laboring. The UMC of Nyegezi was carrying out the call to make disciples of Christ.

Meeting the pastor and congregation in Nyegezi, and four other congregations who faced similar challenges in Mwanza, set the tone for GNJ leaders preparing to teach at the pastor school. In 2018, United Methodists in Greater New Jersey created a partnership with Tanzania which included an annual Local Pastors’ School to help equip leaders. The effort, funded by the Miracles Everywhere campaign, included a five day school held at Wesley College in Mwanza, Tanzania. One hundred and twenty men and 41 women leaders of churches came from across the country, some travelling 18 hours by bus, to attend the school so that they could further their ministry in their communities. Many brought their children with them.

The curriculum started with Connecting the Biblical Narrative. The GNJ team bought Swahili Bibles in Dar es Salaam to distribute because they learned last year that many of the local pastors did not have one.

“I saw God at work as the people bolted up to the front to pick up their Bibles and then immediately opened it to the scriptures being used in the lessons that day,” said Rev. Dr. Gina Hendrickson, Superintendent of Northern Shore who led the first sessions on Connecting the Bibilical Narrative. “My teaching came alive and people were so thankful.”

After hearing Rev. Ronell Howard of Christ UMC in Piscataway lead a session on generosity, James Mnkondya, a student at Wesley College said, “In Africa, we believe we are poor. But now I understand that we have so much to give. Generosity is not about money. It is about using the resources we have. We have been equipped and we can transform the world thanks to the teaching of the GNJ.”

The session on spiritual gifts led by Rev. Heather Valosin from Denville Community UMC, was particularly meaningful to Rev. Young-Seon (Christina) Kim, a GBGM missionary who is serving as the Director of Next Generation Ministries in Tanzania. “Young people in Tanzania need to recognize their spiritual gifts to lead the church,” said Kim. “Our pastors need to hear how identifying spiritual gifts in the young people in the congregation will help their ministry go wider in the community.”

Music, dancing and singing united the group each day in joyful worship and devotion. Rev. Javier Barroso demonstrated how to lead through a sermon, using a powerful example of his own personal experience and connecting it to the story of the Prodigal Son. His vulnerability opened up the following small group session to create a safe space for the Tanzanian pastors to share their personal testimony as sermons. “We all learn that our own stories are the most powerful testimonies to transform lives,” said Barroso.

Bishop John Schol who led the team summed up the experience, “The GNJ Tanzania Pastors’ School provides valuable insight into creating a transformative church for these leaders in Tanzania. The reality is that we have much in common with our brothers and sisters in Tanzania and face many of the same challenges in the church. We are learning so much from this partnership.”

Bishop Mande Moyumbo of the North Katanga Conference inspired the students by sharing the powerful message of evangelism. “The people are waiting in the villages and neighboring cities to hear us share the word of God. Jesus Christ used the church to heal each and every one. Now it depends on you. It all depends on your faith.”

The GNJ team knew these words to be true because they had seen them in action at the Nyegezi church. The people of Nyegezi see each day the investment the congregation is making in their community. They are curious about what comes next. They are waiting to hear the word of God. By putting their faith into action, the congregation in Nyegezi and congregations throughout Tanzania, just like congregations in Greater New Jersey, are sharing the message of Christ and transforming the world.