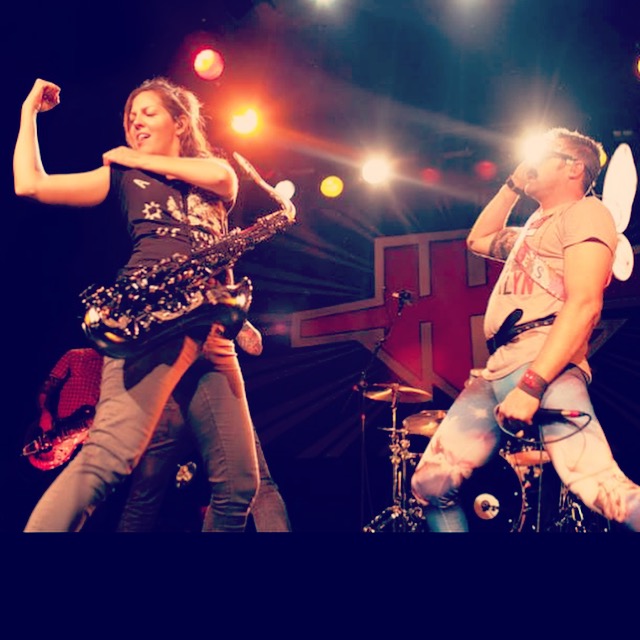 Leanor Ortega Till, the saxophonist for Five Iron Frenzy, is thrilled to share her heart at this year’s IGNITE youth conference in Wildwood. Photo provided

WILDWOOD – “I believe life has seasons. In my first season I was a planter of seeds, ministering to those who didn’t know Christ along with those who were new to the faith. Now I feel called to be a watering can for Christ, helping those who are already walking with Him and showing them the Scripture in a new way”. It is that call from God that leads Leanor Ortega Till, more popularly known by the fans of Five Iron Frenzy as “Jeff the Girl,” to speak at the IGNITE Youth Conference this fall in Wildwood.

Since 1995, Till, the saxophonist for Five Iron Frenzy, along with the seven other band members, have gained national recognition as a Christian ska/punk band. Their ability to combine silly and fun lyrics along with deeply spiritual songs, all set to fast-paced tunes has made them wildly popular among both Christian and secular audiences. They have recorded a total of six studio albums plus two live albums and a dozen other EPs, singles, and collaborations.

Till is also the lead vocalist for a side project called “The Fast Feeling” an 80s style synth-pop band that just released their first album Pulses. The lyrics of the band continue to inspire a life of introspection and eternal perspective.

Till’s introduction to music started young when she received a pawn shop alto sax at nine-years-old. Coming from a musical family, she recalls jamming out to Motown with her father in a room in their house completely dedicated to music.. At 12-years-old, attending a Foursquare Church camp, she answered an alter call to accept Christ into her heart. Although she had grown up having occasionally attended church, she hadn’t really grasped the personal relationship that Christ wanted to have with her until that point..

Five Iron Frenzy was formed towards the end of her senior year in high school in 1995, and Till’s cousin, Micah Ortega, was instrumental in helping her join the band.

“I was so excited. I knew I was going to be attending Colorado Christian University, but I also knew I was joining a band that encouraged me to share my faith in God,” she said. It wasn’t always easy to be a Christian in the music scene, even in a Christian band. “It’s always a struggle, but we had great relationships with our home churches, along with other believer friends and family and of course, with each other. We had people we could go to with our struggles or problems, or even doubts. That is so important for young people to have in their lives; people to honestly talk with.”

“I felt like God was calling me to go out and spread the word to a broader audience,” she said. “So far I’ve been guest preaching at pretty much any church that will have me and have gotten to visit some pretty amazing places including Seattle, Wisconsin, and Hawaii. I’ve talked at different church events like discipleship conferences, but IGNITE is the first youth conference I’ve gotten the opportunity to speak at. I’m so excited to get a chance to share my heart at IGNITE.”

When asked how important she thought it was for parents, youth staff, and church members to support youth conferences like IGNITE she was very passionate. “I think it is so important for parents and even church members without kids to donate time or sponsor a kid to attend or support events like this in any way they can. These junior high and senior high schoolers are making such important decisions at this age, and especially those who attend public school really don’t get to hear the messages that come out of events like this from many other sources.”

IGNITE Youth Conference is scheduled for September 29 through October 1 in Wildwood.  The second price break for IGNITE 2017 ends on August 31. Visit www.ignitenj.org for more info and to register.