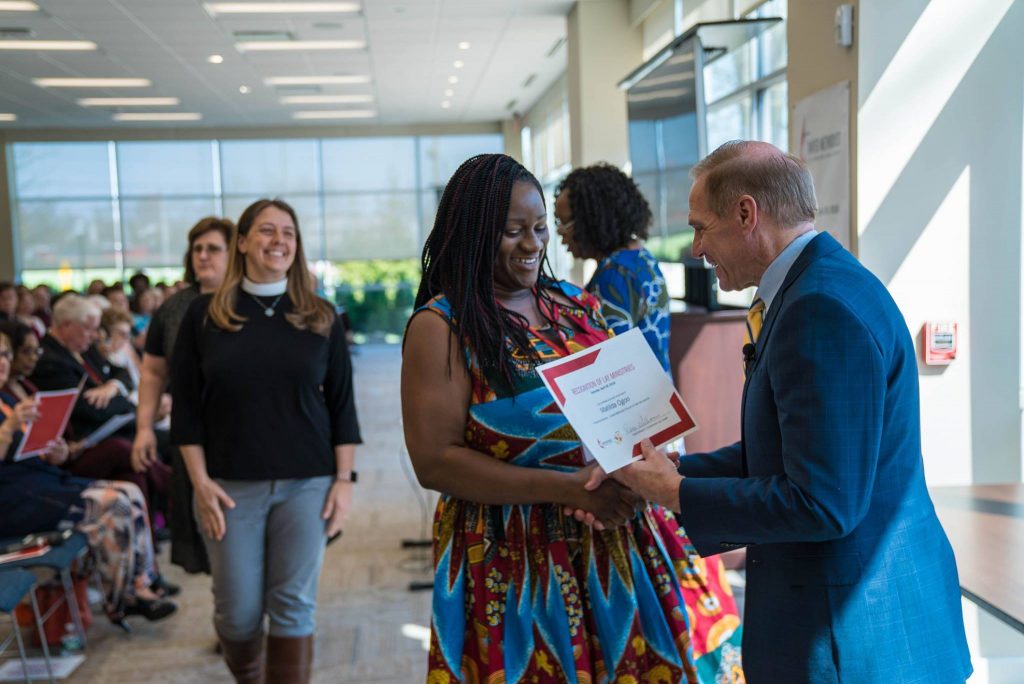 Bishop John Schol honored GNJ laity at a recognition ceremony on April 28 at the Mission and Resource Center for faithfully living out their calls. Photo by James Lee

NEPTUNE – It was an afternoon spent sharing what’s being done in GNJ’s local churches to reach out to their communities. Two hundred and sixty people, both clergy and lay, gathered to celebrate their ministries on April 28 at the Mission and Resource Center where they were recognized and honored for faithfully living out their calls.

“Many stepped out in faith to meet identified needs in sharing God’s love,” said GNJ Lay Leader Rosa Williams. “It was absolutely wonderful!”

Among the honored was 11-year-old Maddie, a recently confirmed member serving at Christ UMC in Lakewood. At a young age she has served as a member of the children’s choir, liturgist, acolyte, volunteer in Red Bird Mission in Appalachia, volunteer for Interfaith Hospitality and for Lakewood Code Blue, providing warming shelters for the homeless.

“Maddie has demonstrated dedication and passion towards that which she believes in and finds ways to accomplish goals and dreams,” said Rev. Iraida Ruiz de Porras, Senior Pastor of Christ UMC in Lakewood. “She strives to be her best and actively seeks the best in others.”

“Maddie is not the future of our church,” said Ruiz de Porras. “She is very well the present of our church; a gift to the community and an agent of hope and change for the transformation of the world.”

Maddie wasn’t the only youth highlighted at the recognition ceremony. The children’s ministry at St. John UMC, nominated by Cynthia Wilks-Mosley, was also honored. The reemergence of the church’s VBS joined congregants, the local Nanticoke Lenni-Lenape Native American tribal family, the surrounding community and neighboring churches in a partnership to tell the stories of the local Native American culture, sharing the links to God. The backbone of the VBS team was the elder volunteers assigned as teacher aides.

“Our elders brought the tribal wisdom and knowledge into the mix,” said Wilks-Mosley. “In fact, one of the highlights of the VBS was an elder honor ceremony where the children prepared a program, including honor gifts for the elders. Those members who were not able to volunteer in the program became our prayer warriors and it can honestly be said that 100% of our membership participated in the program.”

With the church’s self-designed Native American immersion curriculum, children learned ways both to live a Christian life and follow the tribal ways of their ancestors.

“We praised God with drumming and dancing,” said Wilks-Mosley. “The children acknowledged the Creator’s bounty as they experienced blackberry picking like the children of generations before them.”

The church took a bold step to move this curriculum into the Fairfield Township Afterschool program. According to the 2010 census, the township lists the highest Native American population in New Jersey.

“The program actually started at the church, but our attendance maxed out at ten children and transportation was always an issue,” stated Wilks-Mosley. “The school district was approached to include the Native American immersion curriculum as an extra component for the afterschool program.”

The first year averaged 85 children two days per week with this year averaging 115 for three days each week. The school district sees the church as a community partner. St. John’s UMC provides eight Thanksgiving baskets, two Christmas baskets, 120 children’s Easter baskets, two eighth grade scholarships, and snacks for children. In April, the church assisted the school district in the implementation of a supper feeding program for every child at no cost to the program or the church.

“For a little church built in 1859 and basically hidden away within a state park, we have had to be creative with our electronic media and we view it as a ministry,” said Sayner. “I think people are longing for connection and meaning today, as they always have, but church can be a bit intimidating if you aren’t a regular, you don’t know what to expect.”

The church started live-streaming their Sunday worship services to give people on the outside a look in. It also sought to maintain connections with people who care about the church but couldn’t be there.

“We have had college students’ move out of state to study, but they tune in to connect with us on Sunday morning,” exclaimed Sayner. “We have people who work on Sundays and can view the service when it’s convenient for them.”

The services are streamed on Facebook Live and posted to the church’s Facebook page for viewing afterwards.

“I think Thomas Merton’s idea that love is our true destiny and that we don’t find the meaning of life by ourselves alone but rather with another has inspired me to reach out and try to connect with the busy people all around us who may not even know we are there, or whose schedule doesn’t permit them to join us on Sunday mornings.”

Sayner creates creative and inspiring posts that are personalized to Waterloo with photos of the church’s beautiful setting while also reminding people of God’s love.

Laity Recognition Awards are given by the Laity Board each year in honor of the ministry of GNJ laity.  Nominations are accepted each winter.  To nominate a lay person for 2018, look for announcements in the Digest.

“I was inspired and humbled by the stories of GNJ laity rising to the occasion to serve their communities,” said Bishop John Schol, who awarded each laity with a certificate. “God is using the fruits of their ministries to transform the world.”