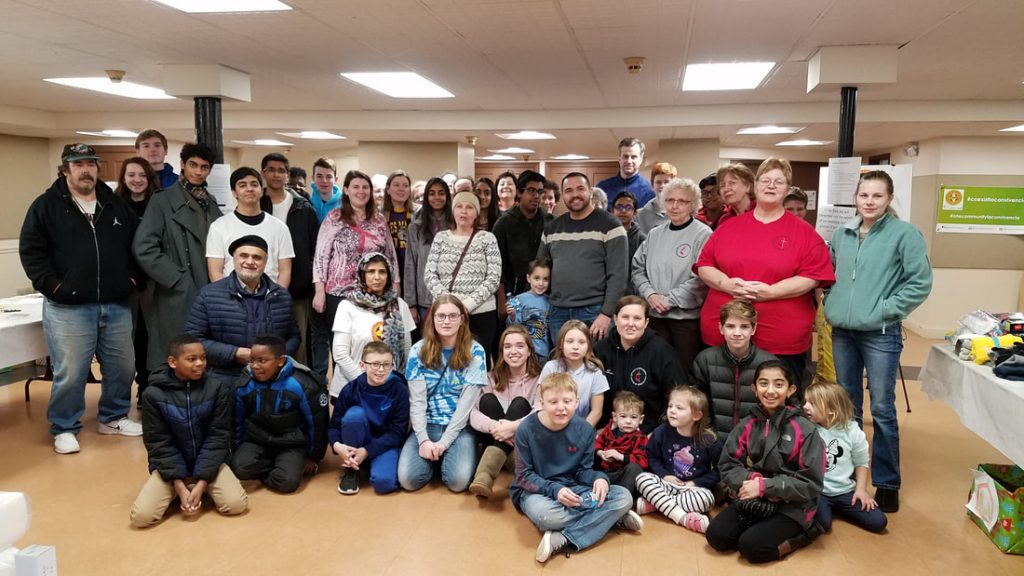 An interfaith day of action on Rev. Dr. Martin Luther King, Jr. Day united youth and family from the Hightstown community with a desire to serve. Photo provided

HIGHTSTOWN – An interfaith day of action on Rev. Dr. Martin Luther King, Jr. Day united youth and family from the Hightstown community with a desire to serve. First United Methodist Church of Hightstown partnered with La Convivencia, an interfaith nonprofit lead by local lay leaders in the Windsor-Hightstown area, for a meal and toiletry packing service project that brought together Christians, Muslims, Jews, Bahai’s, and Hindus. Local faith leaders took part in the event by holding a panel discussion on King’s life and how it has impacted the way communities work for social justice.

The family-friendly partnership event was the culmination of a goal inspired by First UMC’s work with Team Vital in 2016. The church honed in on what it felt it lacked most – becoming a more missional and visible presence.

The Mission Team, a sub group that formed out of Team Vital, got to work brainstorming ideas. In December 2018, they asked their congregation to bake homemade goods for personal delivery to police, fire, first responders and the local housing authority. The response was huge.

“The whole church wanted to get involved to make this happen,” said the church’s pastor, Rev. Sammy Arroyo. “We wanted to start easy but meaningful.”

As the Mission Team continued asking how their church could become more missional, they decided to partner with outside organizations in the community already involved with serving and invite them into their church space. This led to a partnership with La Convivencia, which means to coexist, a multicultural and interfaith organization whose mission is to honor and celebrate the differences and shared values of a pluralistic community based on principles of acceptance, trust and mutual respect. By uniting a diverse citizenry through community service, civic engagement, and community dialogues, the organization seeks to create a more inclusive and peaceful society that values the traditions of all faiths, ethnicities and cultures.

With a structure in place for an MLK Day of Service, First UMC served as host and provided volunteers. Participants packed food and toiletry bags, moving from table stations where they sorted donated clothing, drew pictures, wrote notes and made postcards to place in bags.

“The youth led the activities and the adults just followed suit,” said Arroyo. “That was pretty cool to see; interfaith kids working together, hearts desiring to serve. We were all one people that day.”

“King’s life was important in making a step forward towards civil rights for all,” stated Sultan. “His work was of tremendous importance and it is crucial to take the same steps he took to get closer to equality for everyone.”

Sultan spoke of King’s involvement in seeking economic justice for the poor and oppressed and how community service is a shared core value.

“Our purpose today as we continue this struggle with our day of service at First United Methodist Church in Hightstown is to serve humanity no matter their background.”

Sultan encouraged participants to leave with a determination to serve the less fortunate and follow King’s role model.

Arroyo was overwhelmed by the amount of food donated to the day’s event.

“We didn’t expect that much,” he said. “But it wasn’t just about how much food or how many bags we packed but the idea of bringing together people of different faiths to pack them. It was a moving experience to see that unfold, especially watching kids of all ages involved.”

Arroyo joined the panel alongside an Imam of a mosque in Princeton and a Rabbi from Pennsylvania.

“We wanted people there to understand that it’s not always how the media portrays it to be; pitting us against each other,” stated Arroyo. “We broke this stereotype by showing what unites us and how we can learn and come together without compromising our beliefs but working in partnership.”

Youth were given an opportunity to share their thoughts with the panel. Arroyo described a particularly moving instance in which a 13-year-old Muslim girl quoted Jesus’ call to help one another in Matthew 25.

“We all live together in the same community with diverse thinking and viewpoints,” said Arroyo. “Churches should challenge themselves to work with others while at the same time showing they love Christ by caring for those who don’t share their faith. We all share the same space and should work together to better our communities. We are a multi-faith, multi-ethnic nation, and the church has a responsibility to ensure that we live and work together in love and respect.”

Arroyo encouraged churches to step outside their walls and their comfort zones and “worship God with our hands and feet” proclaiming the Gospel with “action and mission.”

“The new partnership between our church and La Convivencia is opening new doors and making God visible to the community,” said Arroyo. “When we love one another and live in harmony, God is truly made visible. And this is how we do it.”

For more information about First UMC of Hightstown visit hightstownmethodist.org or email Rev. Sammy Arroyo at pastorsammy07@gmail.com if interested in navigating interfaith conversations and partnerships in community.