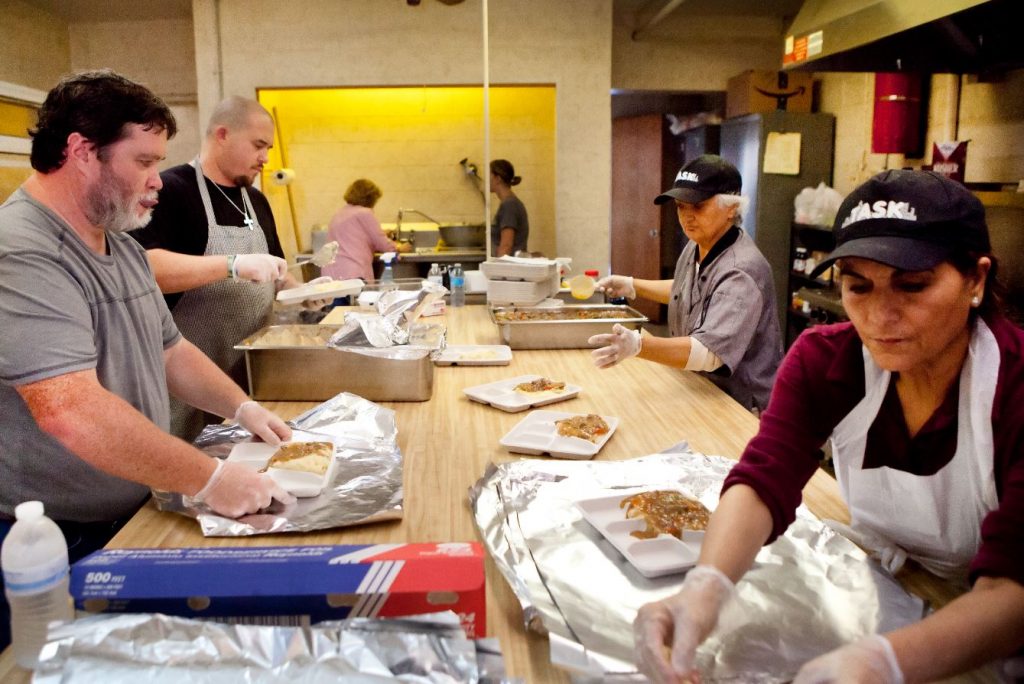 Jim Maloney, Jon Lorie, Farzana Jaffery, and Shaesta Chaundhry are pictured hard at work on a Tuesday afternoon inside the kitchen of Trinity UMC in Bordentown, preparing for the evening's outreach. Photo by Tim Proctor

BORDENTOWN – In the southern shadow of Trenton’s skyline, situated between a sprawl of railways and bus lines, welfare motels, turnpikes and interstates, a beacon of hope glows inside the warm fellowship hall of Bordentown’s Trinity UMC.

A delicious fragrance marinates the nearby kitchen as Shaesta Chaudhry clangs a tray of simmering potatoes onto the wood countertop. It’s a Tuesday, and outside the weather is frigid, but inside the kitchen is snug and toasty. In just a few short hours volunteers in trucks arrive to spread some of that warmth out into the community with a weekly meal delivery to the struggling families who call the neighboring motels their homes. Simultaneously, the hall starts to throng with people from the area fraught to afford nourishment for themselves and their families.

Since April 4, Trinity UMC has been acting as a satellite campus for the Trenton Area Soup Kitchen (TASK) and serving home-cooked meals prepared by Mercer County Muslims Against Hunger (MMAH). Chaudhry, a volunteer with the Mercer County chapter of MMAH, running programs in Trenton, Hightstown, and Freehold in addition to Bordentown, helped launch the satellite soup kitchen at Trinity along with the church’s hospitality team. The two groups were introduced by TASK after church members reached out to the organization to learn how they could convert their fellowship hall into a place to feed the hungry.

“A community program like ours, involving Christian, Muslim and secular volunteers, sends a simple yet very clear message: hunger has no religion, and strangers are the friends we haven’t met yet,” said Rev. Thomas Miller, Trinity’s senior pastor.

According to Chaudhry, the meals are made with the same quality food that volunteers would eat at home with their own families.

“We feed people what we like to eat,” she said.

It started with one meeting after church when the laity hospitality group got together to address one simple question: how can we serve the community around us? Ryan Forbeck was at that meeting. Since October of 2016, he had been attending Trinity and was moved by one of Rev. Miller’s sermons about using talents to serve God and the community. He was drawn to the church’s hospitality team and found himself around a table with church members Elyse Carty, Diane Moretz and Rev. Miller.

“God’s hand was in this the whole time,” said Forbeck.

The second Tuesday in operation, the newfound outreach received a $1,000 donation from the former Bordentown mayor.

“And from there the donations started coming in,” exclaimed Miller. From partnerships with ACME, Wawa, a local deli and Bordentown Bagels, a momentum began building not only among church volunteers but local businesses, community members, high school students, college students seeking resume experience and leadership skills, and interfaith circles.

“The most exciting part as a pastor is seeing no resistance to opening Trinity up to strangers,” said Miller. “The response has made me praise God, and it’s been one of the most exciting ministries in my pastoral career.”

Since April, over 3,000 meals have been served. Approximately 80% are take-outs to six local motels each Tuesday evening. Forbeck has been pitching in to drive and deliver meals.

“The experience is really hard to put into words,” he said. “We knock on the doors, and some of the people want us to come inside and pray with them. Others just quietly thank us for the meals and close their doors. All are extremely grateful, and there are a lot of people who want to talk and connect.”

According to Forbeck, the more he volunteers and gets to know the people in the motels, the more his perspective has changed.

“It makes me look at my life differently,” he said. “I’m more grateful, and my eyes have been open to how big of a need it is just to feed people. And that’s just the beginning.”

For Forbeck, the experience has been nothing short of rewarding. He feels volunteering his Tuesday nights with the ministry has made his life complete.“It’s humbled me greatly, and it’s shown me not to take things for granted,” he said.

The outreach has a core group of leaders but has seen more than 30 people step up to volunteer. Chaudhry’s mosque donates the meals for Trinity’s distribution, and volunteers sit with visitors while they eat to make them feel welcome.

“It’s a beautiful thing to see Christians working alongside Muslims,” said Forbeck. “I’m amazed at how successful this has been since April.”

Between the church, the mosque, and TASK, each play a vital part in making the Tuesday night outreach possible. “Without the conjoined teamwork it wouldn’t happen,” said Forbeck. “It sends a message to the community that we’re all just people; that we’re all the same inside.”

For Moretz, witnessing that message in action has left her “flabbergasted.”

“Seeing all of these different people coming together and earnestly working to help out and seeing their compassion has really opened my eyes,” she said. “My opinion of people has changed, I can’t even express my feelings. People are not only helping each other, they want to help each other. Their hearts are opening more and more for the people around them. It’s just amazing when you see how many people care.”

As Trinity’s Lay Speaker, Moretz has faithfully involved herself in the church since 1997, but now she’s witnessing a hands-on mission revival with the Tuesday night ministry.

Miller described an instance when a woman stepped off the local River Line with three children and entered Trinity on a Tuesday night, seeking escape from a broken home situation.“Everyone sat and prayed with her, fed the children, and provided them with clothes,” said Miller. Needing a place to stay, it only took a few minutes for volunteers to pull together resources to fund a motel room covering several nights.

“It’s a mission station around here,” said an elated Miller, who defined the ministry as “working like a clock.”

Carty, an Italian who loves to feed people, felt like the ministry fulfilled a new purpose for her.

“I knew something was missing, and all fell into place,” she said. “It was definitely spirit led. It’s encouraging to those of us involved to see what can be done when people work together. And I think that’s the most amazing thing I’ve seen: different people so happy to work together; laughing, teasing each other, and coming together. You can just feel the energy in this place.”

Some Tuesdays, Carty and Chaudhry wonder if they’re going to have enough food.

“And yet we always do,” said Carty. “It’s loaves and fishes around here. Always more than enough.”

Moretz shared a moment when a stranger brought a struggling family to the church after discovering them sifting through an Aldi parking lot. “They were rushed with love,” she said. “I remember leaving that night with such a great feeling that those people were taken care of.”

Pastor supported, and laity led, Trinity plans to budget the outreach into the church’s mission program as it evolves to become an entity in the local community.

Miller says the experience has been a “thrilling spiritual eye-opener” that’s made hands-on help a desire. “It’s easy to be invisible to a community if you’re not doing something tangible and relevant,” said Miller. “The message here is clear: God loves you, and so do we.”

For Trinity, MMAH, and TASK, the sustainability and momentum is an encouragement as they continue the outreach one week at a time.

“Only God knows its future,” said Chaudhry, “And if it expands, the mosque will always be there to help.”

Miller sees the movement as an example of a great need for social services, both religious and secular, working together outside of silos.

“It’s pleasing that people of two different world religions are working together,” he said. “It’s a voice of sanity in the midst of insanity, and sends the right message during these troubled times when people are losing hope.”

Miller continued, “We tried something new, and the spirit took hold of it. And now I’m just pinching myself thinking, ‘did this really happen on my watch?’ All of this came out of a meeting where we asked one simple question: How can we do our part to serve our community?”