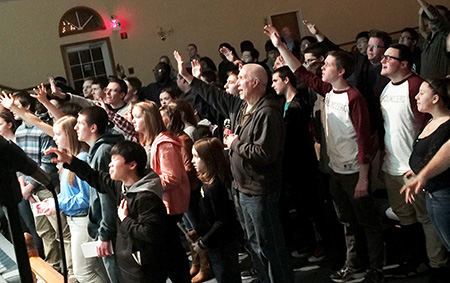 SICKLERVILLE – The venue and crowd may have been smaller than this past fall’s IGNITE Youth Conference in Wildwood. But the impact at the first IGNITE Regional Youth Rally was quite significant. The first of three regional rallies took place on Feb. 28 at Sicklerville UMC with about 200 people in attendance. The reaction was positive in more ways than one. The featured speaker was Preston Centuolo, a national speaker who focuses his message on young people and the challenges they face. Centuolo was the featured speaker at the first IGNITE Conference in October and helped build on the momentum of the youth movement in Greater New Jersey.
At the end of Centuolo’s message, about 50 young people came forward to make a commitment to Christ. Many of those that came forward were from Salem UMC in Pleasantville. “We brought 14 youth and 11 of them went forward,” said Salem UMC pastor Blessings Magomero. “That makes a big difference for me. The more we go through this world we know it is not easy to be a young person. They are looking for hope and a purpose.”

A major part of Centuolo’s message was that he can relate to those who feel they do not have a hope or purpose. He shared stories of how he was made fun of in school and even in his own church youth group at times. Finding God allowed him to become himself and he stopped trying to constantly be the way others would like. “We are creatures of habit and we can end up acting the way others want us to,” he said. “I have always loved superheroes, but heroes don’t wear capes, they have compassion. Anybody can get in a rut and anybody can go through the motions. “But today you are at the age that you can write your own story.”

The next two IGNITE rallies are set for Calvary Korean UMC in East Brunswick on March 7 and for Bethany UMC in Wayne on March 21. Another youth group in attendance was First Korean UMC from Cherry Hill. Jee Yung, a senior at Cherry Hill East High School, said he has been to several youth events over the years, but that this one was special. “It had a lot to do with the way Preston spoke,” Yung said. “He just had the right words to get us excited. I would definitely say that it was inspiring, but it was more than inspiration. It was very easy for us to relate to what he was saying.”

The rally also featured the young adult group Ground Zero Masters Commission, which had a band perform the opening music, one of its members share a personal story and also performed a skit as part of Centuolo’s message.
Many youth leaders liked the message enough to mark their calendars for IGNITE 2015 scheduled for Oct, 2-4. “It’s great to see and to have so many youth here,” said Sicklerville UMC Youth Pastor Dan Ulrich. “We are still working on our schedule for the fall, but this will be something that we definitely look into doing.” Magomero brought four youth to last year’s IGNITE weekend in October, but hopes to bring more next fall. “I am hoping to bring between 10 and 15,” he said. “We are going to start doing things in March so they can raise money to go.”