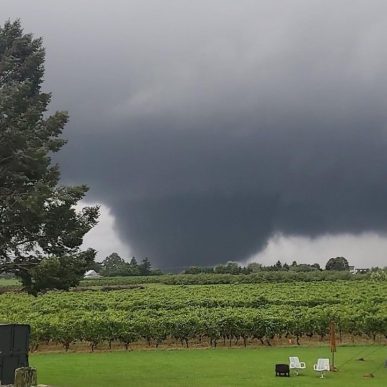 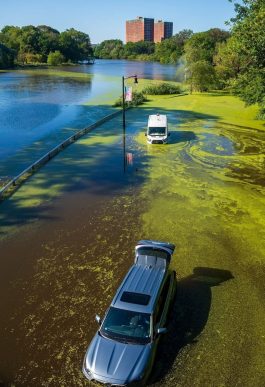 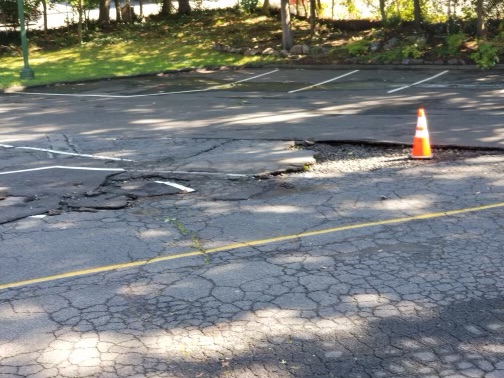 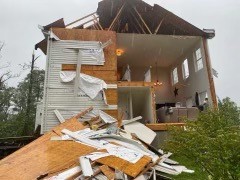 “When the storms of life are raging, stand by me.” —Charles Albert Tindley, the great pastor and hymn writer

When the storm named Ida barreled up the East Coast after ravaging the low-lying areas of Louisiana and Mississippi as a Category 4 Hurricane, those in Greater New Jersey and surrounding areas braced for the havoc they knew she could bring on the night of Wednesday, September 1. Ida, whose power failed to wane despite her one thousand-mile plus trek through several states, brought with her record-breaking rainfalls, high winds and powerful tornados that touched down in the small Gloucester County towns of Mullica Hill and Mantua.

Director of Disaster Response for UMCOR Lara Martin quickly reached out to Bishop Schol offering support, and GNJ’s disaster response leadership and superintendents stepped in to assess damage and the challenges, Schol said in a morning email to all clergy as he prayed “for everyone that was in the path of Ida from the Caribbean through the United States.”

By Thursday afternoon, most churches in GNJ had managed to control the flooding while floodwaters prevented some from leaving their homes or forced others to bail out basements and buildings’ interiors. Thousands coped with no power.

“Some sump pumps failed; other churches/parsonages do not have them. Some pastors are without generators and thus still without power. Some pastors are stuck in their homes because of floodwaters around the community. Some pastors are reporting injury, loss of transportation, water to the ceiling, and/or feeling traumatized by the event,” said Rev. William M. Williams III, Gateway North & Palisades District Superintendent who was closely monitoring the impact of Ida along with NJ Volunteer Organizations Active in Disaster (NJVOAD).

GNJ’s Delaware & Gateway South District Superintendent Glenn Conaway, who knows the area all too well having served as pastor in Fairton, Moorestown and at Trinity Church in Mullica Hill for 30 years before becoming district superintendent in 2017, said, “All four churches in the town were miraculously spared. The tornado took a path between four Methodist churches from Mullica Hill to Mantua. If there had been a quarter mile difference in either direction, it would have been a different story.”

Conaway added that many homes in the Mullica Hill area were damaged in varying degrees, including two farms. The National Weather Service reported that debris from some of the destroyed homes was pulled into the tornado and reached the atmosphere, traveling around 23,000 feet into the air before landing miles away.

“We lost one of our two dairy farms. One hundred cows are gone. Hopefully, they can rebuild,” Conaway said, adding that Gov. Murphy has visited and asked FEMA to help step in the community.

Conaway also mentioned that “Trinity UMC in Mullica Hill has reached out to the mayor and emergency management to offer the church if needed, to help families that have lost everything, and will continue to see how they may help in the weeks to come.”

Characteristic of a powerful and broad storm, Ida continued to wreak havoc as it moved northward on Wednesday night, causing rampant power outages along the way as humid air collided with a much cooler system to create severe thunderstorms. As heavy rains fell, as much as three inches in one hour in some areas, Ida collapsed roofs and caused heavy flooding along roadways and in buildings. Newark International Airport even had to shut down as water rushed into its first floor, making navigation impossible.

Nearby in Bayonne in Hudson County, Ida caused waterways to swell rapidly to unmanageable levels, severely flooding Wesley UMC and the parsonage of Rev. Emad Gerges. Those floodwaters also made their way to Jersey City.

“I was driving from work last night and got caught in a flash flood about a mile away from home. The car in front of me came to a sudden stop as waters from the river overflowed the bank. It happened so fast,” said Rev. Dawrell Rich who leads Clair Memorial UMC in Jersey City. “I tried to push my car into the clearing. I got a few yards but had to give up since the waters were rising so fast. I was able to grab my things (laptop) and treaded through the waters until I got to a restaurant where they helped me,” said Rich, who added that he returned to the scene a few hours later.

“My car was perched atop the highway divider like Noah’s ark,” said Rich. “I just went back, and my car and a dozen others have been moved to the side of the highway. I seriously doubt it’s salvageable,” he added, noting that despite feeling a little traumatized, after checking on church members, he discovered no one sustained any real damage.

In Bound Brook, a town of about 10,000 residents along the Raritan River, once again fell victim to a powerful storm after being devastated by superstorm Sandy. At the UMC of Bound Brook, where food ministry has been strong throughout the pandemic and vaccination clinics welcomed the community, the education wing of the church that had been rebuilt following its destruction nine years ago was once again destroyed along with the adjacent thrift store.

Ida continued on her path raging to Union County where unrelenting floodwaters in Elizabeth caused a partial collapse of the roof at Living Hope UMC, and in Rahway caused widespread flooding at Trinity UMC and the parsonage of Rev. Arturo Bautista.

“I had to move my car to higher ground in the middle of prayer service,” said Bautista. Further north in the town of Belleville, the heavy rains also wreaked havoc on the parsonage of Wesley UMC. “The parsonage flooded, along with many homes in Belleville. The church also had water issues, but we thank God all lives were spared,” said Rev. Peggy Holder.

About 20 miles northeast of Belleville in Bergen County’s Tenafly, heavy rains rushed into the home of one pastor and her family, causing the water level to surge to the ceiling. No one was injured. Nearby in Englewood, Galilee UMC received about four inches of rain in its basement, said its pastor, Rev. Elouise Hill-Challenger. To the west in Passaic County, which was also hard hit by the storm, Hawthorne UMC suffered extensive damage from flooding, but no injuries were reported.

As people throughout GNJ continued to clean up and assess damage, NJVOAD offered tips to keep people safe and kickstart their recoveries. In Ida’s wake, it was reported that there were 14 deaths in New Jersey as of Sept. 2.

In an effort to provide solace, Bishop Schol wrote, “I know there are many challenges you are facing already, and storm damage adds further to the demands upon your leadership. We are grateful for all you do to lead the church and are here to support you.”

Echoes of this solace were felt on Thursday evening and into Friday as talk of helping others surfaced. One pastor said he would plan a fundraiser to help the farm in Mullica Hill, while others offered their intact churches as safe houses or held out a helping hand to bail water or clean up. Another pastor made sure her food ministry continued in spite of the flooding, soliciting the help of others including her husband, while another church hosted a collection of over 100 bags of new and used clothing, shoes, toys and books. The original intention was to give to refugees, but as the need arose following Ida’s destruction, they shifted their focus to now also include victims of the storm. Likely as the weeks progress, more and more of this sense of connectionalism will arise. As the scripture proclaims, “when one of us hurts, we all hurt together.”