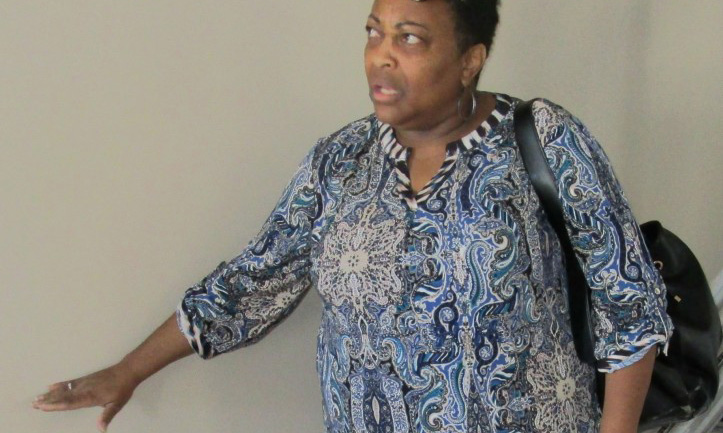 Claudia Waller knows all about hurricanes and the floods that come with them. After experiencing both Hurricane Katrina in New Orleans and Superstorm Sandy in Atlantic City, she also knows how much United Methodists care.

“I lost everything in Katrina,” said Waller, whose home was in East New Orleans, one of the hardest hit areas by Katrina flooding in August of 2005. “Even two weeks after the storm, you still had to have boats to get into that area.”

With that high water in mind, Waller decided after 10 years of working in the casino industry in New Orleans that it was time to come back home to the Atlantic City area. The one problem she faced was how to deal with her house in New Orleans while living in New Jersey.

“I was up here and I didn’t know how I was going to get back down there and clean that house out,” said Waller, adding it was a four bedroom home with a two-car garage. “Eventually, United Methodists came to help and they gutted the whole house. I was able to sell it in 2006, but it broke my heart.”

When Superstorm Sandy slammed into the New Jersey coast on Oct. 29, 2012, Waller wasn’t thinking it would turn into another broken situation. While it wasn’t exactly like what happened in New Orleans, it was close enough. As the storm hit and the tides rose, Waller said about four feet of water rose inside her home on Drexel Avenue. What made the situation more difficult is that she was living there to take care of her mother, who is 86. “We didn’t plan on leaving,” said Waller, who now works as a health benefits specialist. “We know we live on a harbor, so this house has always taken water. We did take everything upstairs and then the water came in fast and it came in high.”

Waller said her brother came with a pickup truck, backed up to the steps on the house and rescued her and her mother. They stayed with relatives until after the water went down. Waller found what she thought was a good contractor to make repairs on the home, but like what has happened in many cases similar to hers, the contractor did only part of the work (and did that part poorly, she said) and then left with money that was supposed to cover the full job. “We had flood insurance and we had a contractor that I thought was reputable,” Waller said. “He disappeared and took half of our insurance money.”

Waller and her mother decided to move back in the house in June of 2013, using the money they still had to try and make the home meet housing code regulations. “We were doing what we could to make it livable,” she said. Waller found out livable can mean different things to different people. When childhood friend and then Atlantic City Long Term Recovery Group Case Manager Supervisor Donna Nelson-Lee came by for a visit, she saw Waller and her mom still needed a lot of help.

She referred their case to A Future With Hope and when Construction Director Lou Strugala walked through the house last spring, he knew action needed to be taken quickly. “It was one of the worst situations I have seen,” Strugala said. “There was really bad mold all over and there were live wires in the walls.”

The construction included installing new hardwood floors in the living room and kitchen, refurbishing a fire place and replacing the inner walls. “They gutted the floors and updated the electric and the plumbing,” Waller said, “They did a remarkably good job. I am so happy.”

While she is happy to return to the place where she grew up, Waller knows her mother will be even happier to return to the place she has always called home. “There have been five generations in this house,” Waller said, referring to her mom, herself, her daughter, granddaughter and great grandchild. “I can’t wait to see the look on my mom’s face when we move back in.”

In addition to A Future With Hope, the funding to remodel Waller’s home came from The Salvation Army, Episcopal Diocese of New Jersey, the Atlantic City/County Long Term Recovery Group and Lutheran Social Ministries. The quick action and the quality work by A Future With Hope and the United Methodist Church has made an impact on Waller that she wants to give back in more ways than one. “When I retire, I am going to donate my time give them my help,” she said. “I’ve got to give that back.

“I also know where my tithe is going now because it’s a place where people can actually get help. They are actually doing things.”