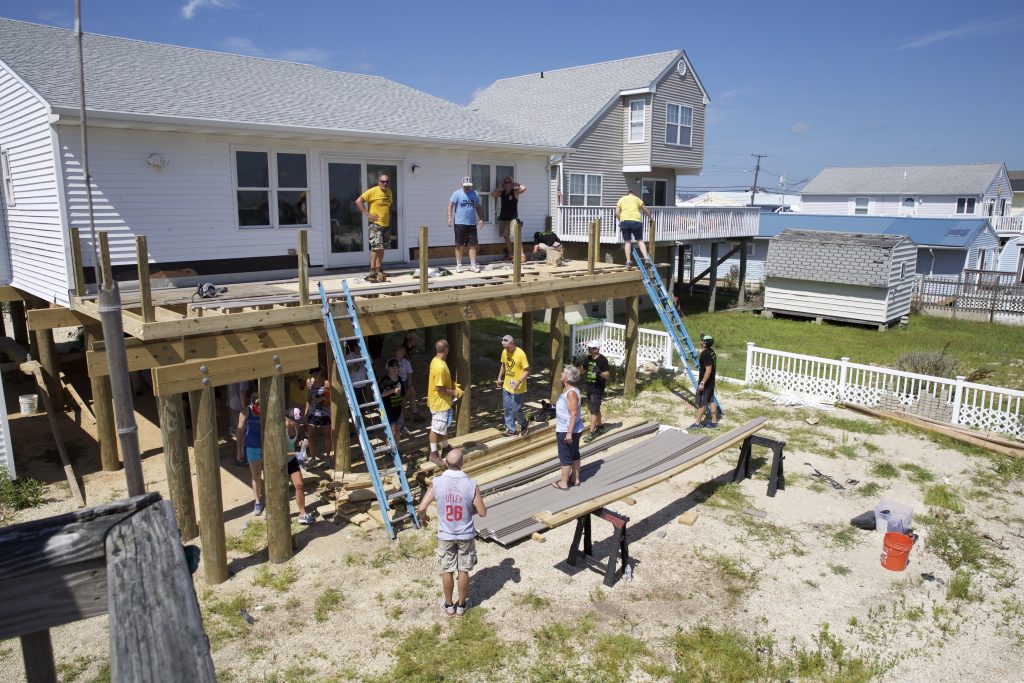 A Future With Hope volunteers help with the rebuilding process of Nan Unley’s home in Tuckerton. Photo by Josh Kinney

Robin Hood is New York’s largest poverty-fighting organization, and since 1988 it has focused on finding, funding and creating programs and schools that generate meaningful results for the families of the region’s poorest neighborhoods. Following Superstorm Sandy in October of 2012, Robin Hood organized a relief fund to help meet the challenges left in the storm’s wake.

“While we were new to funding in New Jersey, we could not have found a better partner than A Future With Hope,” said Stephanie Phillips, a Senior Management Consultant at Robin Hood. “We have found the organization to be well-managed and effective. A Future With Hope provided best-in-class support to Sandy-affected families and expertly navigated getting these families back into their homes.”

Robin Hood has received more than $74.7 million in contributions which have been granted to hundreds of organizations in New York, New Jersey and Connecticut. Since its founding, the organization has raised more than $2.5 billion in dollars, goods and services to provide hundreds of the most effective soup kitchens, homeless shelters, schools, job-training programs and other vital services that give struggling citizens the tools they need to build better lives.

Regarding Sandy recovery, Robin Hood’s website states: “We were humbled by the outpouring of support from people all around the world, and we work to ensure that every dollar we receive goes back into the communities that need help.”

Many of those communities are where A Future With Hope continues to rebuild and bring families home. With an estimated 4,000 families yet to complete their recovery in New Jersey, A Future With Hope’s steadfast commitment to seeing the recovery work through to completion has helped bring hundreds of families home over the last four years. In 2016, the organization rebuilt its 250th home.

“A Future With Hope has been a blessing for us to be this close to going home,” said Nan Unley, whose Tuckerton house was ravaged by Sandy and in February 2016 garnered support from A Future With Hope. “Without them and all the volunteers, it would not have happened!”

A Future With Hope worked with SBP, EDNJ and AHA on applying for a collaborative grant through Robin Hood to drive partnerships between the organizations and finish the job of getting Sandy survivors home.

“We want this funding to help get those families most in need over the finish line,” said A Future With Hope Executive Director Bobbie Ridgely. “We’ve come this far, and we can’t back down now.”

Through 2016, more than 11,000 volunteers have helped move families over that finish line by working with A Future With Hope. Volunteers are needed through 2017 as work continues.

In addition to the grant, generous support from UMCOR and the GNJ Mission Fund has contributed in paving a way forward for A Future With Hope in 2017.

“We knew that recovery from a disaster of this size takes years.  When we set a goal of rebuilding 300 homes, we knew we would be on the ground helping people for five years or more,” said Bishop John Schol.  “It’s what United Methodists do.  When people hurt, United Methodists help.”

The organization continues living into its role as the mission arm of GNJ. In addition to the Sandy recovery ministry A Future With Hope has begun training churches to engage in community development through Communities of Hope training. Over the next 15 years, a goal of launching 100 Hope Centers will move the mission arm toward sustainability beyond disaster relief and recovery and into community renewal throughout New Jersey.

If interested in volunteering with A Future With Hope, please contact Lisa Park at lisapark@afuturewithhope.org or call (732)359-1066