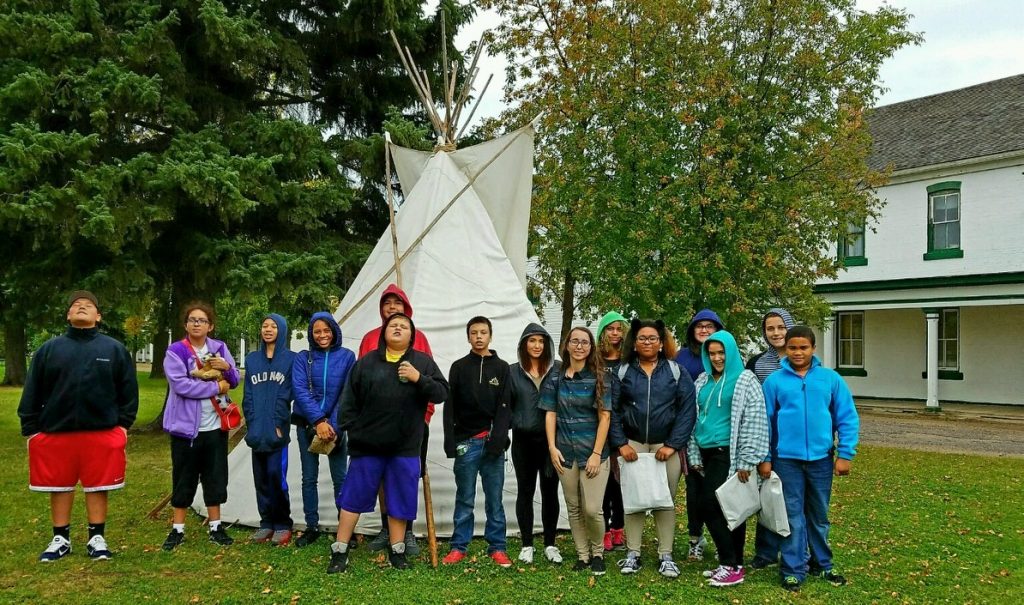 A group of 20 Native American United Methodist youth including four from Greater New Jersey travelled to North Dakota in September to learn more about their heritage and experienced a deepened faith.

They met as a part of the Peg Leg Flamingos Youth Group, a group named as a symbol for overcoming challenges.  Flamingos often stand on one leg and then fly above it all.  A flamingo with a peg leg lives in a world out of balance.

“We are like the flamingos. We are strong, balanced, and connected with the Creator,” said Jaden Shepard of Trinity UMC in Bridgeton who attended the youth meeting.  Flamingos, who are a threatened species, survive because they live in community.

Shepard knew that he was Native American but really never knew what that meant.  “All I knew was my ancestors were born here,” said Shepard. “For me, this trip has served as a learning experience for what it means to be a Native American. Having Native American blood also brings with it the tears of ancestors who were slaughtered, enslaved and abused.”

Trasyena Campbell, also of Trinity, enjoyed the opportunity to bond with young people from different Native American communities and felt a warm welcome.

Allie Mosley from St. John’s UMC in Bridgeton also attended the gathering which was sponsored by the Native American International Caucus and supported by GNJ’s Committee on Native American Ministries

The youth learned about the Dakota peoples and tribal history while visiting Fort Totten, originally a military fort which became a Native American boarding school. Mosley shared that while at the Fort, she felt the tears and the prayers of youth just like herself.

The youth collectively agreed that the Native Americans had to survive just like the peg leg flamingos by living in community and sharing in the raising of their families while fighting to keep their heritage alive. The students explored modern issues of overlooked Native American Tribal people. They visited the Standing Rock Reservation in North Dakota where thousands of Native Americans and supporters have gathered to protest the laying Energy Transfer’s $3.78-billion, 1,172-mile-long crude oil Dakota Access Pipeline to carry oil through sacred ceremonial grounds in addition to threatening the reservation’s water supply.

Each student returned with renewed hearts and minds, knowing more about their heritage and experiencing a deepened faith. Shepard, Campbell and Mosley prepared oral and electronic presentations to share with their home churches. Each participant shared their anticipation for next year’s gathering and commitment to continue the conversations with the youth and leaders they met in North Dakota.

If you’re interested in supporting additional youth to attend Peg Leg Flamingos gatherings or to hear the story from the heart of the youth directly, please contact Cynthia Mosley, St. John UMC at cmosley19@hotmail.com. Portions of this article were contributed by Jaden Shepard and Trasyena Campbell from Trinity UMC in Bridgeton, and Allie and Cynthia Mosley from St. John’s UMC in Bridgeton.