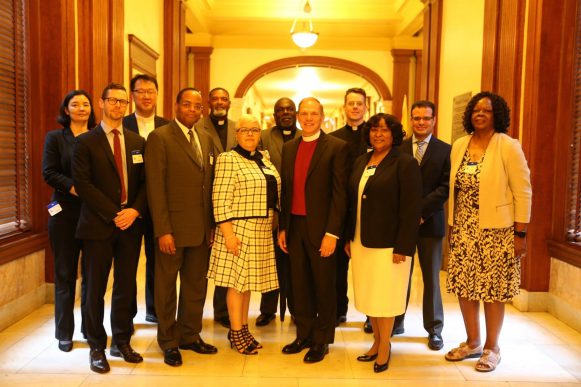 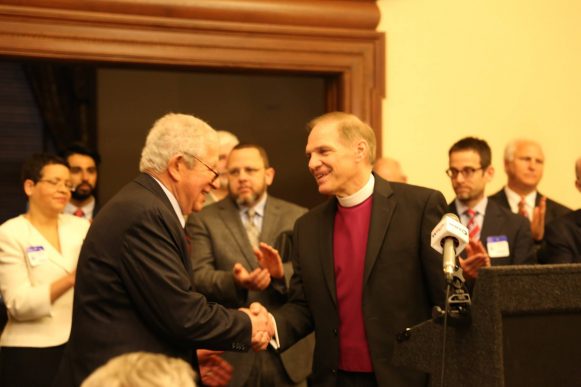 WILDWOOD – In a historic move, United Methodists in Greater New Jersey are seeking justice for children in segregated schools in New Jersey by joining the Latino Action Network, the NAACP NJ State Conference and other social justice groups to compel the state to provide remedies for

According to the U.S. Census, New Jersey is ranked as the 4th most diverse state in the U.S. and yet a report from the UCLA Civil Rights Project in 2017 ranked it with the 6th highest rate of segregation of Black students and the 7th highest for Latino students in the country.

The State of New Jersey has created and followed laws, policies, and practices that require, with very limited exceptions, students to attend public schools in the municipalities where they live. This and other longstanding state practices have fostered and enabled residential segregation.

In presenting the legislation that was passed at the 2018 Annual Conference Session, Rev. Sang Won Doh, Chair of the GNJ Connectional Table, gave thanks to God for GNJ’s leadership and witness “as we work together for a more just education system that provides equitable opportunities to all students.”

“GNJ, as a body of Christian believers, is charged with being a moral compass in the advancement of civil and human rights for all people,” said Rev. Vanessa Wilson, Senior Pastor of Magnolia Road UMC in Pemberton and Chairperson of GNJ’s Commission on Religion and Race. “Looking back to the landmark case of Brown v the Board of Education, we know that separate is not equal. By signing on to this legislation we affirm that every child has the right to an excellent educational experience regardless of race or socioeconomic status.  Moreover, it is well established that racially and socioeconomically integrated schools benefit all students. It provides a richer learning experience and increases the cultural awareness of students and staff.  A solid, well-resourced education is the greatest gift we can give to any child, as well as to our state and our nation. New Jersey is a very diverse state; additionally, all are impacted and influenced by globalization. In order to prepare our children for be contributors and leaders in their communities, the nation and the world, now more than ever, New Jersey classrooms must be a reflection of New Jersey’s rich diversity.”

The lawsuit itself was filed on May 17 at the New Jersey State House in Trenton to coincide with the 64th anniversary of the United States Supreme Court’s decision in Brown v. The Board of Education of Topeka, Kansas which held that “separate educational facilities are inherently unequal” in that they “deprive the children of the minority group of equal educational opportunities.”

This action reflects United Methodist Social Principles and the 2016 Book of Resolutions which states that United Methodists “must address with prayerful determination the issues of race and class that threaten both public education and democracy in America.”

“This important issue is aligned with our denomination’s social principles,” said Bishop John Schol. “As United Methodists we have always been out in front of social issues and this is exactly what we should be doing right now.”

GNJ is undertaking this initiative at a particularly political time in the life denomination building up to the Special Session of the General Conference that has been called for in 2019. In addressing that concern to GNJ leaders, Schol answered: “There is no convenient time for justice. There is no right time for the church to be engaged in mission, justice and mercy. This is God’s time for us to act. God is not waiting for us to get our polity in order. God is calling us to be the church of Jesus Christ today not for when it is convenient for us. Students need us today, not after our special session of the 2019 General Conference. You may say, we might not have a United Methodist Church next year. I tell you we do not have a United Methodist Church today unless we engage in the hard challenges of our time. This is God’s time and this is our time to act. Let GNJ lead the way.”

“The Spirit of the Lord is upon us to change these patterns,” said Schol. “We know that Black and Latino students who attend integrated schools have higher graduation rates and higher entrance rates into college. We know that White and Asian students learn better when they are in culturally enriched environments. Today you will have the opportunity to take a stand and to create more integrated school experiences for the Black and Latino students who find themselves in the most segregated schools in New Jersey.”

The complaint seeks a remedy to New Jersey’s longstanding and intensive segregation of Black and Latino students by voiding laws requiring school children to attend public schools in the municipality they reside. The goal is to replace the current laws with an assignment method that will address and remediate segregation in the state’s public and charter schools.

The denomination’s social principles state, “We believe that every person has the right to education. We also believe the responsibility for education of the young rests with the family, faith communities, and the government. In society, this function can best be fulfilled through public policies that ensure access for all persons to free public elementary and secondary schools and to post-secondary schools of their choice.”

During the legislation regarding the desegregation lawsuit, one Annual Conference member took to the microphone to remind the body that segregation in America was not that long ago.

“I’m in favor of anything that starts to move the ball forward,” he said. “So let’s go ahead and stir things up.”

Schol concurred. “This is more than just our name on a lawsuit,” said Schol. “It involves us, it makes us advocates and engages us to be called to be at work in our communities on this issue.”

For more information on the legislation and issues of segregation, click here.