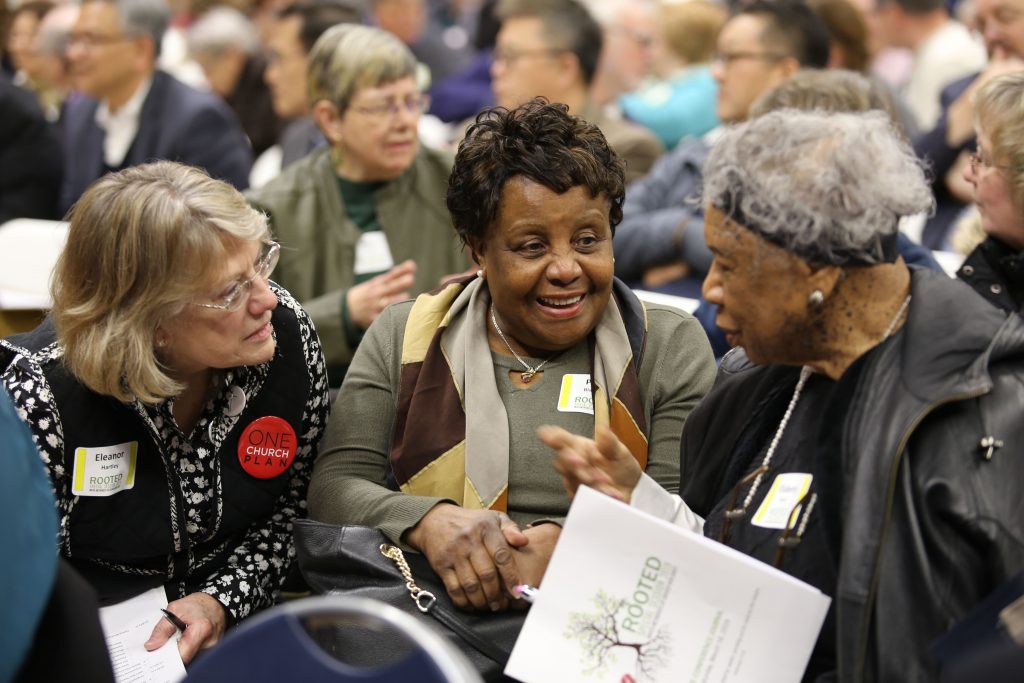 Members of the Greater New Jersey Conference meet in small groups during a special session of their annual conference at Brookdale Community College in Lincroft, N.J. Photo by Josh Kinney

LINCROFT –Nearly 1,000 Greater New Jersey lay and clergy faithfully joined together on March 16, 2019 to discuss how to move forward after decisions made at General Conference 2019. People gathered in small groups and shared their stories and hopes with the full conference. There was a mix of feelings afterward. Some were grateful for the opportunity to learn and know that more work will be done on how GNJ will continue to be in ministry with the LGBTQ community while others were frustrated, believing General Conference resolved the matter. Others were concerned there was not more time for conversation.

The Special Session of the GNJ Annual Conference was announced in November of 2018, well in advance of the General Conference Special Session because Greater New Jersey leadership foresaw the need to come together to discern possible changes to the denomination’s policies concerning ministry to and with the LGBTQ community.  In February, General Conference passed a Traditional Plan that would strengthen penalties for clergy, congregations and bishops who ordained people who identify as lesbian or gay or married same sex couples.  The plan had been ruled unconstitutional by the UMC Judicial Council.  The Judicial Council is now reviewing the legislation and is expected to release decisions about its passage in April.

Bishop John Schol addressed the tensions, reminding GNJ that United Methodists have had disagreements since the denomination’s founding, but also called for a focus on mission, including fighting discrimination in all forms.

“God has made a way for us to be a powerful force for mission and ministry,” said Schol. “We grew to be the second largest denomination in the U.S. and have a world-wide reach building churches, schools, hospitals, and clinics. How did we become such a force for good, for God? By trusting the leading and teaching of Jesus Christ.”

Schol, in addressing the crowd, acknowledged division over church policies that exclude gays and lesbians from clergy leadership and weddings in the church, but emphasized that United Methodists have endured major conflicts before over slavery, segregation, tobacco, alcohol and women’s ordination.

“What we have found is that votes may retain or change policies, but votes do not change hearts. Our concern and conversation about the LGBTQ community should not lessen our commitment to change hearts and minds so that we end prejudice, oppression, sexism, racism and privilege,” he said.

The GNJ Special Session approved creating a diverse, 16-person “Way Forward Team,” to help guide the conference. They represent GNJ leaders of the Board of Laity, Board of Global Ministries, Board of Trustees, Board of Ordained Ministries, Connectional Table, Council for Finance and Administration, Local Ethnic Concerns Committee, Reconciling Ministries, United Methodist Men (UMM), United Methodist Women (UMW), The Wesleyan Covenant Association, and Youth Council. The team is to report back by Greater New Jersey’s 2020 annual conference.

“In GNJ we will welcome people as they are, including the LGBTQ community,” said Schol. He went on to acknowledge that GNJ has LGBTQ people serving as chairpersons of Church Councils, Boards of Trustees, SPRC’s and serving on staff.

“They are gifted and called and will serve in GNJ,” he stated. “I want you to go home to your congregations and share with LGBTQ people and say, our bishop says you are wonderfully made and are created by God and gifted to serve the church and that I thank God for them.”

Schol shared how he is called to serve the whole church and to make room for all to feel valued and for open conversation ensuring all voices are heard and honored; providing space for differences while remaining faithful to Biblical scholarship and reason, tradition and experience.

Schol reminded the body that they are part of a “big tent” denomination that includes Hillary Clinton and George Bush, who are active members. ”

Schol praised GNJ’s tremendous progress, citing that the conference is in the top five most diverse in all United Methodism with nine languages spoken on Sunday mornings, more than 150 multicultural congregations and 100 cross-racial appointments.

“You are a gift to the church,” he said. “Let us continue to move forward in our giftedness to be light and hope for others.” He added, “In the midst of present disagreement, I am proud and glad to serve in a theologically and ethnically diverse conference. Our efforts like our 10-year plan for cultural competence and the lawsuit to end school segregation are steps in the right direction. But there are still miles for us to travel. As we gather today, let us be mindful that a vote is not the destination. Transformation of hearts, minds and systems is the long-term goal.”

Attendees were invited to the microphones to share their personal stories, feelings and hopes that informed their experience or understanding of the church’s current LGBTQ differences, what for them had changed since General Conference, and to speak about what congregations need to faithfully carry out the mission to transform the world while making disciples and growing vital congregations. Schol urged all viewpoints to come forward and share. A particularly moving testimony came from Rev. Drew Dyson, Raritan Valley District Superintendent, who vulnerably shared about his LGBTQ children and the effect of the Traditional Plan’s passage on his family.

“I am disheartened by the punitive nature of the Traditional Plan and its attempt to push dissenting viewpoints out of The United Methodist Church,” stated Dyson. “The restrictive rules and mandatory minimum punishment under this plan mean that I would not be able to officiate the weddings of my own children without facing the certain possibility of the loss of my clergy orders. Even more stinging, the passage of the Traditional Plan left my children feeling exiled from their spiritual home. My prayer is that we find a way to move forward that is more loving, more inclusive, and more just for all of God’s children.”

Schol addressed concerns about leaving the church or not paying shared ministries. “This is not a time to disengage,” he said. “This is a time to engage. We need to invest in relationships with people who think differently and have different experiences than ourselves. We need to invest in theological education in parts of our global connection particularly where there are fewer opportunities for theological education and where leaders all think alike on issues like scriptural interpretation, ethics and homosexuality. When everyone thinks alike, that is not a strength but a weakness.”

Heather Flzur of Haddon Heights who attended as a non-voting visitor said she “really appreciated the love that was demonstrated through Bishop’s words regarding all participants.”

Rev. Dave Delaney said he was praying that “God’s message of love brings all together so that we can focus on making disciples for Jesus Christ and being in mission, caring for those who are hurting while standing up for justice so that the world can again see that Christians are known by our love.” He added that the Special Session was “a blessed celebration of our diversity, knowing all are loved equally by God. I felt the love from all in the gathering.”

In closing, Schol urged GNJ to keep an outward mindset that seeks to understand, connect and build relationships with those who think differently, and love like Jesus. He asked the conference to focus on the mission which includes growing 100 church leaders to grow leaders, the Miracles Everywhere Campaign which has surpassed $4 million in its $6 million goal, partnerships with Puerto Rico and Tanzania, calling and equipping apostolic leaders, Next Generation Ministries, A Future With Hope, and The United Methodist Stewardship Foundation of Greater New Jersey.

“God continues to do a new thing even in the midst of tension and dissension,” said Schol. “The Hightstown Church just voted to go from part-time to full-time pastoral ministry. The New Brunswick Church just committed $48,000 and the Piscataway Church committed $75,000 to the Miracles Everywhere Campaign. These are just three examples of the many churches who are focused on the mission, released for service in the community and around the world, and have an outward mindset. Thank you for your continued commitment and ministry.”

Youth lay representative Sara Smialkowski shared that one of her favorite parts of being involved with church is “Having an amazing Bishop” and being a part of the GNJ family, to which Schol responded, “I am the fortunate one.”