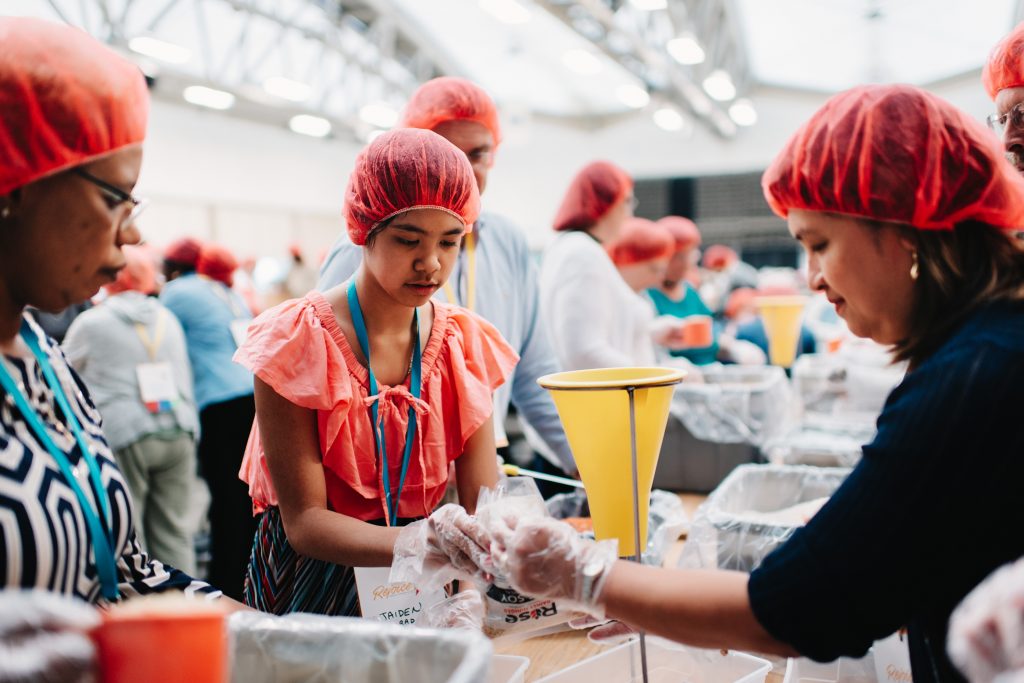 Volunteers at the GNJ 2017 Annual Conference packaged 30,000 meals in less than an hour and a half. Photo by Shari DeAngelo

WILDWOOD – Music pulsated throughout the East Hall of the Wildwoods Convention Center as more than 200 volunteers working in unison systematically and excitedly helped package 30,000 meals in just an hour and a half.

For the fifth year in a row, GNJ has taken part in the noble endeavor, packaging a total of 150,000 meals. This year, volunteers nearly doubled as churches, groups and individuals from Wildwood and the Cape May County community were invited to join participants.

“The volunteers at this event are charged up and ready to work,” said GNJ Lay Leader Rosa Williams. “Besides learning what is going on in the conference, this is an event that keeps people coming back year after year, to be a part of something that’s bigger than any one person, and takes many hands to make.”

The organization, founded by a United Methodist minister in 1998, focuses on mobilizing a global network of hunger champions that package nutritious meals to distribute to partners in countries around the world who are best able to address the causes and effects of hunger based on their local presence and expertise.

For the last four years, the United Methodist Church in Madison has been involved with Rise Against Hunger after student assistant Chelsea Jackson brought up the idea for the program when she started at Drew Theological Seminary. Last year, the Madison Rotary Club sponsored a meal packaging event similar to Rise Against Hunger called End Hunger 3.6 which emphasizes the fact that every 3.6 seconds someone dies of malnutrition or starvation. Along with other local organizations and Drew University students, Madison UMC joined the initiative and helped package 100,000 meals.

“Rise Against Hunger not only allows our clergy and lay leaders an opportunity for hands-on service but also educates participants around the root causes of hunger,” said Rev. Hector Burgos, Director of Connectional Ministries. “It helps them imagine new ways to be in mission in their local communities and the world.” Burgos applauded the organization for recognizing that ending hunger is more than just feeding people but also expanding hunger-fighting programs through regenerative mission.

This year’s meals will be shipped from Rise Against Hunger’s Philadelphia warehouse to impact thousands across the world.