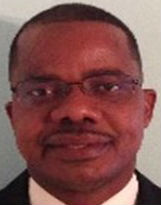 Rev. David Tokpah returns to his native Liberia each year to attend that area’s annual conference. The next time he goes back he may become its bishop.

Tokpah, currently the pastor at New Covenant UMC in Hamilton, N.J., was one of two episcopal candidates to emerge from the voting process in February at the 183rd Liberia Annual Conference. The final vote will be taken when 80 delegates from the West Africa Central Conference meet in December to decide who will replace retiring Liberia Bishop John Innis starting in January of 2017.

The process of Tokpah becoming a bishop started a few years ago. In 2011, he was first approached by friends in Liberia with the idea, but he wasn’t so sure then.  Last year he was asked about it again, and said he felt ready to move forward.

When results from the first ballots were announced last month, he was the top vote getter. In the final vote, he finished second, making him one of the two nominees for Liberia. The other nominee is Rev. Samuel Quire, administrative assistant to Bishop Innis.

“I was very surprised,” Tokpah said of the voting. “Especially since I don’t live there. But I have been in touch with several clergy and laity for the past four years. For any job in the church, I think you have to have what I call some kind of stomach feeling to know that it is the right thing to do. I have been praying about it a lot.”

In the February voting, 13 clergy were nominated for bishop in the first round. Ten were eliminated after the first vote. The next day, Quire won the second round with 581 votes, Tokpah netted 509 votes. According to nominating rules, the Rev. James Labala, with 429 votes, was eliminated from the process but could be nominated on the central conference floor in Abidjan, Cote d’Ivore, in December.

Tokpah said having a day between the votes allowed others to rally support for him.

“I am humble and happy because I think this was God’s doing,” he said. “I did not expect to be in the top five or so. At Annual Conference, people began to group themselves to talk to other churches on my behalf.”

Tokpah also pointed out that the United Methodist Bishop in Liberia is not only a religious leader, but a political leader, too. Current Liberian President Ellen Johnson Sirleaf and several of her cabinet members are United Methodist as well.

“It is almost like a political process where you have to answer questions about what you think of this issue or that issue,” Tokpah said of the election process. “The politicians of the country are very concerned about who is going to lead the church after the bishop retires. They count on the bishop to get support from the people.”

One issue Tokpah has talked about is churches in Africa becoming less dependent on outside financial support for building and capital projects.

“One thing I am very passionate about is that even though the church is growing in Africa, leaders need to look at how to sustain it,” he said. “Once you get a grant from the government, then it is not free. You have to pay for it one way or another. One thing I would like to see the church in Africa do is have at least 50 or 60 percent of their own funding for projects.”

Tokpah said the way GNJ Bishop John Schol is leading the rebuilding efforts after Superstorm Sandy with A Future With Hope helps him believe that Africa can do something similar with its building projects.

“As a church, we are living into Bishop Schol’s vision for a conference after a national disaster,” Tokpah said. “It shows we can do something. That’s one thing that other conferences can learn from.”

Tokpah says he wouldn’t be able to do the job of bishop without support from his wife, Jestina.

“If you are elected in Liberia it is difficult to say you can lead the church alone,” he said. “The culture is quite different from here and you are dealing with all kinds of issues. You are looking at spiritual, political and social issues. At the end of the day, you need someone you can talk to.”