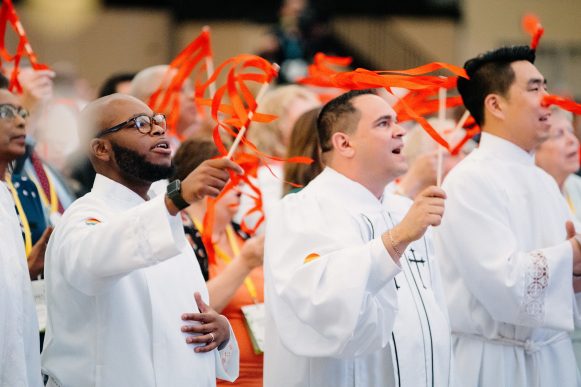 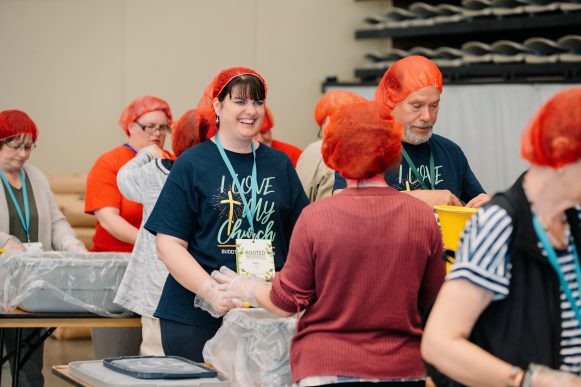 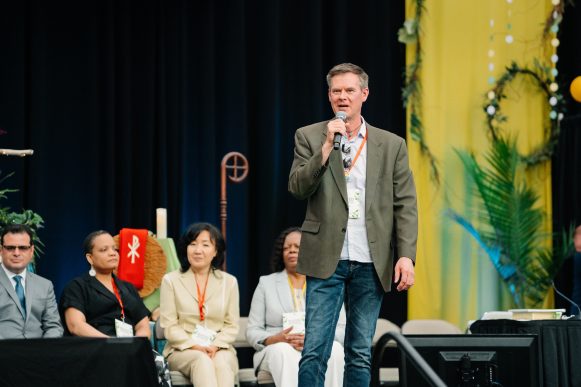 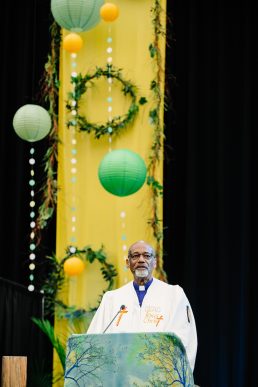 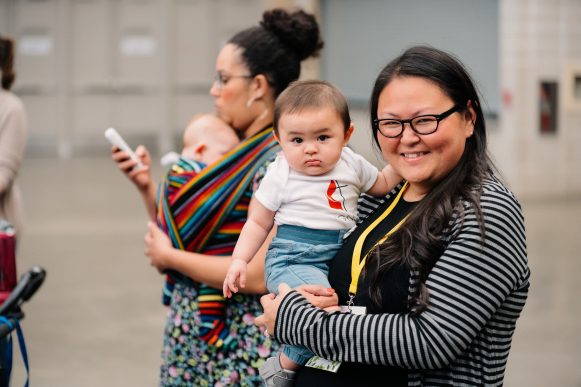 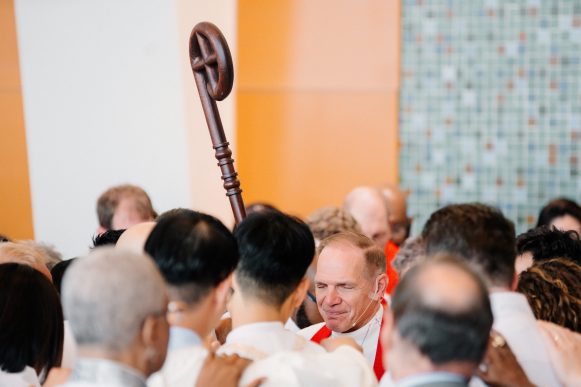 United Methodists of Greater New Jersey affirmed their roots, celebrated growth and contemplated branching out at this year’s Annual Conference in Wildwood. The theme of ‘Rooted’ recalled the passage from Jeremiah 17:8 “they shall be like a tree planted by water, sending its roots by the stream.”

The theme resonated with those in attendance.  “I think the theme is appropriate”, commented Lewis Weil, lay member at large, Church of the Master in Howell, “because we’re deep in our roots and won’t be pulled out by any winds of change- we’ll stay connected.” Cheri Maurer, lay delegate from Broadway UMC in Salem, reflected that, “the theme reminds of faith, growing like a sapling into a tree.”

Laity and clergy representing local churches met in the Wildwood Convention Center on the evening of Sunday May 19 to start the conference with a powerful ordination service.  18 newly commissioned and ordained clergy were uplifted, including one missionary for the General Board of Global Ministries who will serve in Mongolia. From the counties and cities of New Jersey, GNJ Methodists are sending far reaching roots.

In his opening Episcopal Address, Bishop Schol lifted up the ministries of Greater New Jersey’s congregations, sharing the ways lay and clergy leaders demonstrate love by reaching outward. Schol spoke about the good works being done by GNJ’s vital mission partners as they offer financial management, to age young disciples, and fill housing needs in the community. He called for 50 congregations churches to plant the seeds of the next Methodism, charging them to be pioneers in ministry. He challenged 75 congregations to be the next Hope Center, 30 to start and grow a youth ministry program, ten each start a new worship experience, and invest in the Stewardship Foundation to move GNJ forward; and Schol challenged 100 congregations to be the next miracle in the Miracles Everywhere Campaign.

In a personal and emotional witness to the church, Bishop Schol expressed his commitment to explore new expressions of Methodism in the wake of current disagreements over homosexuality. “Let me be clear, I am not interested in changing a few paragraphs in The Book of Discipline and then call it a day,” Schol told the assembly, “the Gospel demands more of us, of me and of you as leaders of the church of Jesus Christ. God is ready to do new things through us and while it will not look the same, it will be Wesleyan, it will be connectional, it will be transformative and it will turn the church outward.” The full text of the Episcopal Address can be found on page 2.

“I felt so blessed to hear the bishop encourage us to move forward,” Shawn Grant, a licensed local pastor at Ballard UMC said, “in a way that we can all gather at the table.”

Furthermore, on Tuesday, Bishop Schol invited members of the Way Forward Team to share their work during Holy Conferencing. The vice chair of the Wesleyan Covenant Association, David Wherle, and Reconciling Ministries chair Amanda Hemenetz both spoke about how the team provides hope in moving forward. At microphones, conference attendees spoke about times in their lives when they experienced outward reaching ministries. More on the Way Forward can be found on page XX.

Greater New Jersey’s roots nourish the fruits of many labors in local churches, statewide, and throughout the wider connection. The Miracles Everywhere Campaign received $3xxxxxx (put in exact number) from GNJ congregations, which will support partnerships in Tanzania, Puerto Rico, A Future With Hope, and Next Generation Ministries. Sammy Arroyo, GNJ’s representative to the NJ Coalition for Diverse and Inclusive Schools, updated the body on a historic lawsuit against the state of New Jersey to desegregate public schools. GNJ leaders reported on growth toward the conference’s 2023 Strategic Plan Goals, and on resources like the Breakthrough Worship Series, Clergy Coaching, Congregational Leadership Development Initiative, and more. Volunteers packed over 30,000 meals during Annual Conference for Rise Against Hunger, forming an assembly line with one person ringing a gong every ten thousand meals packaged. “It was amazing,” said Bonnie Simmons, lay servant visitor of Knowlton UMC, “a good time of fellowship, working and dancing and singing together.”

Important business included the election of delegates to the General and Jurisdictional Conferences in 2020.  Annual Conference voting members elected eight delegates, four clergy and four laity, to be GNJ’s voice to the denomination in Minneapolis next year. Another eight delegates, four lay and four clergy, were elected to attend the 2020 Northeastern Jurisdictional Conference in Hunt Valley, MD, one of five such jurisdictions in the U.S. You can read more about the elected delegates from GNJ on page 6.

Several attendees commented on the smooth operations of this year’s legislation. “It was efficient,” reported Marilyn Balzer, retired deacon, “and actually fun, to see clergy and laity participating together.”

As Methodists near and far envision the future of their denomination, they may look back on their roots as much as seeking fertile ground. The seeds GNJ sows are bearing fruit.  The people of Greater New Jersey, like Jeremiah’s tree, are firmly planted, and sending out roots by the stream.