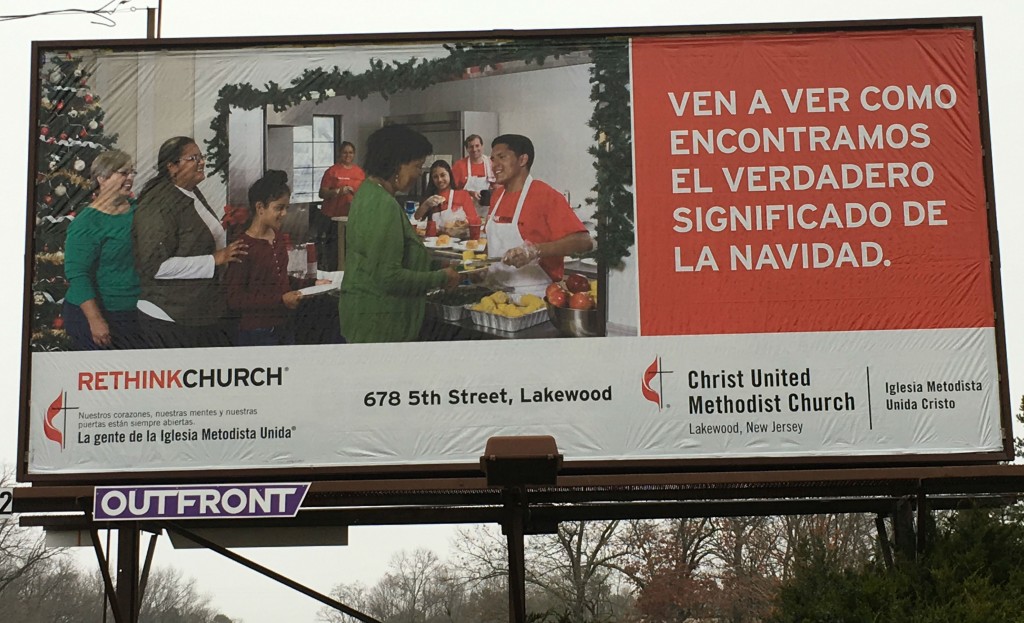 When Christ UMC pastor Iraida Ruiz De Porras found out her church in Lakewood was going to be featured in a billboard advertising campaign, she knew it was a good thing. It’s turning out better than she thought.

Christ UMC was one of five Greater New Jersey Hispanic-oriented churches to receive advertising grants from United Methodist Communications (UMCom) to promote the Advent season on billboards, Pandora radio, door hangers, mass mailings and placements on selected websites. The requirement for the grant was for each church to update their profile on Find-A-Church at umc.org and create a Facebook page.

The other churches involved were First UMC in Union City, Iglesia Presbiteriana Metodista Unida in West New York, Oasis UMC in Pleasantville and Wesley UMC in Trenton. The campaign lasted through Christmas.

“We are very, very grateful for this,” Porras said. “It has created a lot of energy and has lifted everyone’s self-esteem about the church. They are very positive about things in the church now.”

Christ UMC has an English and a Spanish speaking service each Sunday. Porras said there was an increase of nine in attendance in the English service in the two weeks after the billboards became visible, including a family with two children attending Sunday School.

The Lakewood billboards appear in two places on Route 9 and one on Rt. 528.

“The members are so excited about what’s going on, they are telling other people and their friends about it,” Porras said. “Word of mouth of has helped, too.”

Porras took photos of the billboards and had them made into small cards. They were then taken and given out with undecorated ornaments at church.

“I ordered cards that looked like mini billboards,” Porras said. “Then I gave them clear ornaments for each person to design so they can give out the ornaments with the cards that have our Christmas Eve and Cantata service times on them.

“We prayed for the people who will be receiving them, too.”

A ripple effect of the billboard campaign for Christ UMC was the creation of a church Facebook page. Porras says the page has nearly 100 likes now and that it has more than 450 views.

“The fact that people are viewing it has been a positive for us, too,” said Porras, who was a pastor in Puerto Rico for two years before spending the last eight years in Greater New Jersey. “I’ve been getting friend requests from all over the United States.”

The first request for the ad campaign was made by GNJ Director of Connectional Ministries Hector Burgos this summer.

“This is the first time UMCom has partnered with Hispanic/Latino churches nationwide for this type of campaign so we are excited that five GNJ congregations were selected to participate in it,” Burgos said. “The promotional campaign provided a unique opportunity for local congregations to connect with new people in the community and increase awareness of our Hispanic/Latino ministries in urban areas with a fast growing Hispanic population.”

Porras said it has been enjoyable to see the enthusiasm spread throughout Christ UMC.

“It’s been great and exciting for the church,” she said. “It was unexpected. God is good.”