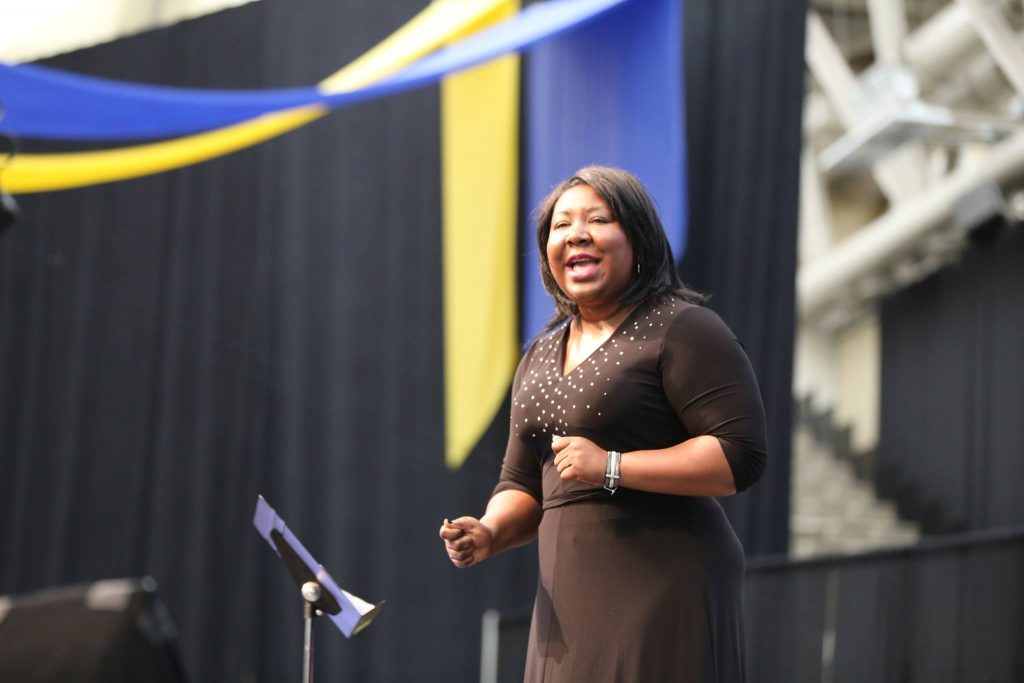 WILDWOOD – “What greater time for the church to be the church than when there’s so much division?” Erin M. Hawkins, General Secretary of the General Commission on Religion and Race asked the 2017 Annual Conference in Wildwood last month. “This is the work Christ beckons us toward.”

Hawkins, a lead official of the denominational agency that cultivates racial inclusion and the full participation of all people into the work, witness and life of the United Methodist Church, stood before Greater New Jersey leaders, teaching on intercultural competency.

A 10-year intercultural competency plan was approved by the 2017 Annual Conference to develop laity and clergy to be more culturally fit so that GNJ strengthens and grows diversity, inclusion and collaboration. Hawkins challenged United Methodists to be “bridge-builders” and “pillars of hope” in their communities.

The plan is being developed by a Cultural Competency Task Force made up of a diverse, wide-ranging collective of GNJ leaders. Rev, Giovanni Arroyo, a Provisional Elder of the Baltimore-Washington Annual Conference who serves on the staff of The General Commission on Religion and Race facilitated the task force, acting as a resource for GNJ. Arroyo also led a workshop at the 2017 Annual Conference on what it means to be a cultural bridge maker.

Arroyo explained that churches don’t always match their communities.   “There’s a gap between who we are and who we’re called to be in mission with,” Arroyo stated, showcasing a chart comparing GNJ with the State of New Jersey. “In GNJ, we’re 79% white and 21% people of color while New Jersey is 59% white and 41% people of color,” he said. “Is our church matching our society?”

As one of the denomination’s most diverse conferences, GNJ has 114 of 511 congregations that are multi-cultural. Nine languages are spoken on any given Sunday during worship and there are 146 cross-racial, cross-cultural appointments. However, there is significant room to grow.

The GNJ Intercultural Competency Plan calls for ambitious goals for 2027 including:

The plan can be found on the GNJ website in the pre-conference journal addendum.

“There is no us and them,” Hawkins said. “We are all them if we look closely enough. We are the oppressor, the excluded, the wounded, and the oppressed. We are all of it.”

Hawkins challenged GNJ leaders to build and sustain bridges that are capable of handling tension and compression. She used metaphors of a physical bridge; its cables and pillars as strong elements that keep the bridge grounded in the community and lives of people.

Being culturally competent, Hawkins explained, meant that the church is a balancing form of hope and love in a community. She commended GNJ for a decade-long commitment to intercultural competency, saying that “Sturdy, strong bridge building will take time.”

“Are you willing to be a pillar in your community?” she asked the crowd. “It’s not just one group’s job, it’s everyone’s job, and no one is to be blamed or shamed.”

Arroyo’s workshop stated that reaching more people, especially those who are younger and more diverse, were ways to bring about cultural competence in GNJ and impact the mission field.

“Intercultural competency helps us to have the love of Jesus and the ability to connect with those who have different experiences,” he said. “We need this in order to be relevant.” Arroyo concluded his workshop by saying, “This isn’t something we need to add on. This is something we need to be doing as part of our discipleship, as children of God.”

Hawkins echoed Arroyo’s words when she asked the audience to acknowledge that everyone had their own story. “If I am not willing to see myself in the person whose perspective I disagree with, I cannot be useful to the cause of Christ to build a better humanity.” She continued, “We don’t do this because we want to be politically correct or because diversity is trendy, but because we want to be disciples of Jesus.”

Rev. Gina Kim is the District Superintendent of the Palisades District, one of the most diverse districts in the nation. She said she sensed a need for intercultural competency as she traveled throughout her district.

“I hear a desire for better and more training,” she said. “It takes a long-term commitment to increase intercultural competency and I thank God for GNJ’s long-term plan.”

As Hawkins’ message came to a close, she introduced what she dubbed ‘the new LAW’ which stands for ‘Love Always Wins.’

“Are we willing to be on the winning side?” she asked, departing the stage. “The end of the story has already been written. It’s just a matter of if we want to be a participant in that story.”