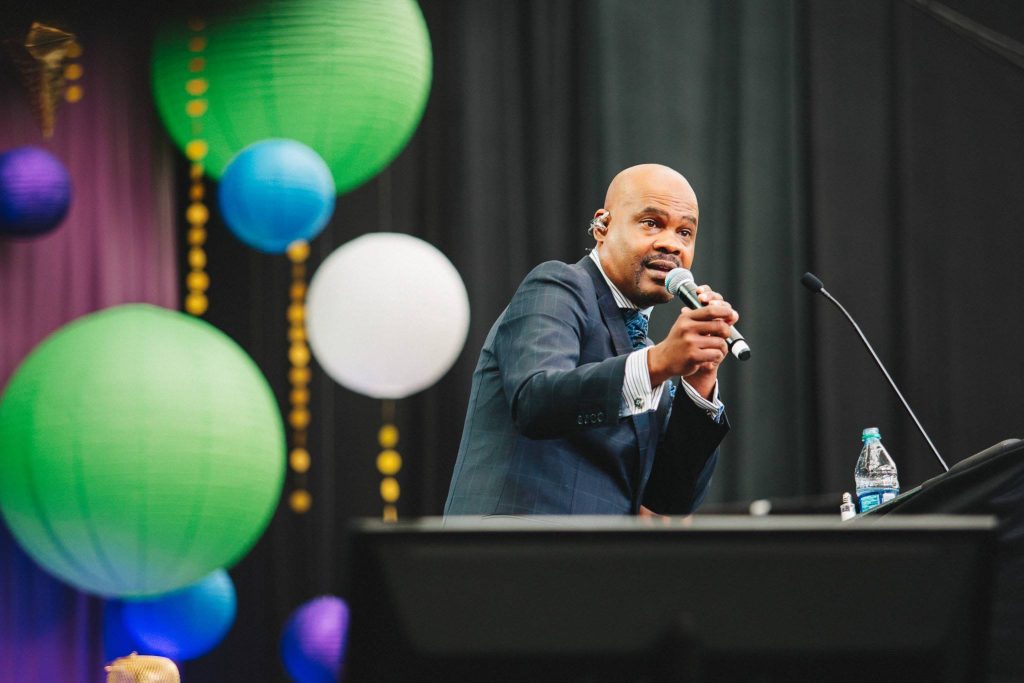 Junius B. Dotson, General Secretary of Discipleship Ministries (pictured above) and Rev. Dr. Susan Henry-Crowe, General Secretary of the Board of Church and Society addressed the 2018 Annual Conference session in Wildwood on the topics of making disciples and eliminating poverty. Photo by Shari DeAngelo

WILDWOOD – Hundreds gathered at the Annual Conference stage with arms outstretched. They were publicly committing before their peers to go forth and passionately make disciples. Junius B. Dotson, General Secretary of Discipleship Ministries, an international agency of The United Methodist Church, called them to take the lead in an address to  the conference on what it means to be a disciple.

He shared about the agency’s “See All the People” campaign, which attempts to ignite and inspire the spirit and movement of disciple-making across The United Methodist Church.

“In order to make disciples you have to first be one,” Dotson exclaimed. He described discipleship as ‘a lifelong journey discovering who you are and whose you are.’

“It’s an ongoing process,” he said.

Dotson described a disciple as a Holy Spirit led follower of Christ whose passion every day is to know, grow in, live and share the life of Jesus. He challenged attendees to equip people so they can spend the rest of their lives daily pursuing their relationship with Christ, serving God and finding leadership within themselves.

“How you lead yourself shapes how you lead others,” he said. “Your commitment as a leader to growing and maturing as a disciple is vital to any discipleship in your local church.”

Dotson called  United Methodists to quit worrying about fixing churches and the denomination and instead get super serious about making disciples of Jesus Christ.

“This is something you have to live into,” Dotson said. “Every congregation has to stay relentlessly focused on making disciples.”

Churches large and small, rural, urban and suburban, traditionalist and progressive, can find common ground in that, Dotson argues.

He praised GNJ for its definition of what it considers a vital congregation: a Holy Spirit led community of passionate disciples who are working together to grow new disciples, inspiring worship, active small groups, risk taking community mission and generous giving to mission.

Rev. Dr. Susan Henry-Crowe, General Secretary of the Board of Church and Society addressed the Annual Conference the next day and highlighted the importance of a living wage, equal pay for equal work, caring for laborers and proclaiming and affirming the sacred worth of all people. Henry-Crowe explained how society has increasingly become disconnected despite living in a world more connected than ever.

She shared troubling statistics of 27 million worldwide slaves, economic disparage throughout America, dehumanization of workers, and how the poor are often punished and stigmatized.

She quoted John Wesley who said, “One great reason why the rich, in general, have so little sympathy for the poor, is, because they so seldom visit them. Hence it is, that, according to the common observation, one part of the world does not know what the other suffers.”

Lamenting the negative effects of globalization, Conference attendees were challenged to imagine an economy that works for and honors the dignity and worth of all people and shift from a perspective of scarcity to an embrace of abundance.

“The Gospel of Jesus is that God has given us all that we need,” said Henry-Crowe. “We must rejoice and share in our abundance and not fret to death over the scarcity narrative that we set up. We must imagine another way and see people in poverty not as a problem to be solved but as Christ Himself, calling us to respond in love.”

“We must reject the premise of an economy in which people, community and creation are disposable,” she said. “In the church, it’s about ministry with those in poverty, living on the margins, wounded by the church and living in deep relationship with one another. Let’s roll up our sleeves and do the hard work of living into that vision.”