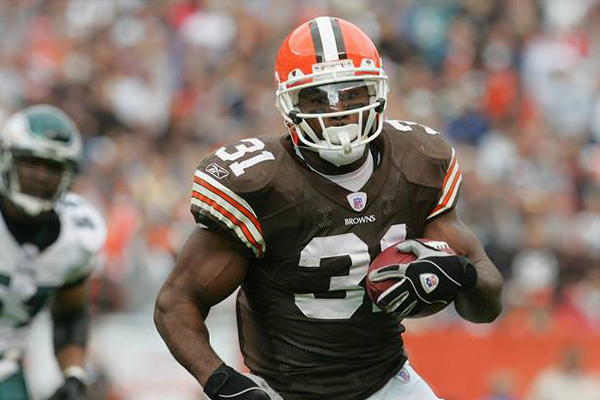 William Green, former running back for the Cleveland Browns will share his journey of faith at IGNITE 2016. Photo provided

William Green had it all: fortune, fame, and four seasons playing football in the NFL. A 6-foot 215-pound running back for the Cleveland Browns, Green’s career was a success, yet he still felt unfulfilled, like something big was missing.

“I thought there had to be something more,” he said. “I achieved fame and fortune, so now what?”

Green had come a long way from an insolvent childhood plagued with pain and hardship. Born and raised in Atlantic City, both of his parents fell victim to AIDS. That left the young man of 13 in the early 1990s questioning his faith in God, begging for answers and healing. Unable to bear watching his mother suffer from the disease, Green prayed to trade places with her.

“I was raised in a church. My grandfather built one with his own two hands in Atlantic City,” Green said. “As a kid, I remember saying the prayer of salvation, except I didn’t believe it or mean it in my heart.”

Growing up, football became Green’s god, and his teenage years at Holy Spirit High School in Absecon were spent drifting away from the faith of his childhood. He played for his school’s football team and received multiple high school All-American honors before receiving an athletic scholarship to attend Boston College. There he played for the school’s Eagles football team from 1998 to 2001. In two years as a starting running back, he compiled over 2,700 yards rushing and 32 touchdowns. In 2000 and 2001, Green was a first-team All-Big East Conference selection and was honored as the Big East Offensive Player of Year. In the 2002 NFL Draft, Green was a top-rated player selected by Cleveland.

“The NFL didn’t take away the pain in my life. Neither did the money or the fame,” Green said. “So I turned to drugs and alcohol. Everything the world said would make me happy didn’t work.”

The patience and will power displayed by Green’s wife, Asia, left a profound impact on the NFL star’s life. The couple had been together since high school; Asia having lived through her husband’s struggle to find peace, purpose, and fulfillment. After his second year in the NFL, she began sharing her faith.

“Her love and patience moved me,” Green said. “I decided I needed to give this God thing a chance.” After years of drifting from “fleeting satisfaction” and “temporary void-fillers” Green finally found fulfillment and wholeness in Christ, returning to the faith of his childhood.

“I saw how all things work together for our good and God’s glory,” Green said. “Everything was turned around for me.”

Green became a motivational speaker at corporate, church, and school events and was ordained a minister in 2012. He will take the stage this fall at IGNITE in Wildwood, sharing his story of “true conversion” and what it means to have a real relationship with Christ.

“I’m going to be talking about ambition and drive. Whether it’s a career, sports, or something else, it isn’t a bad thing, but if we’re looking for that to be our ultimate fulfillment, it won’t be,” he said. “Money, fame, I had it all, but it wasn’t enough. Everything got old. None of it gave me abundant life. But Jesus did. Christ is true joy.”

Green wants students to leave IGNITE assured of God’s spirit. Despite being introverted, he believes God has called him to step out and share his story. He plans to share his testimony and encourages both youth and leaders to do the same, making the weekend conference a comfortable place to “show off scars” and “reveal the healer” leaving with a greater reliance upon God.

“No matter what background, race, social or economic status, we’re all struggling,” said Green. “Pain might look different for each person, but we all have problems. But if we share openly and honestly, our hearts are softened and more open and vulnerable to hear the gospel.”

“I want youth pastors to leave rejuvenated, keeping inspired, and remembering why they do what they do,” said Green. “This is a chance for them to reconnect and remember why they got into ministry in the first place, and to be encouraged to let the spirit lead.”

Recently, Green and his wife moved from their home in Berlin, New Jersey to Montrose, Colorado where Green works for the Christian Action Camp’s USA Youth Outreach. He welcomes youth and leaders to reach out to him at willgreen1433@yahoo.com