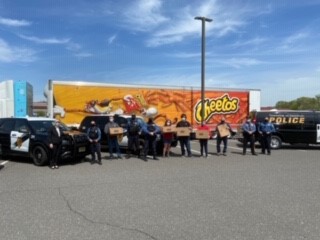 For the past two months Rev. Linda Ross and First UMC of Mays Landing have been embracing their mission “to bring all to Christ by feeding his sheep” with humility, grace and the help of many friends throughout Hamilton Township in Atlantic County.

“We have always done a lot of feeding of the mind, body and spirit, but now we have been able to really make a difference in the community by feeding the sheep,” said Rev. Ross, who just started her 11th year at the church. “It has been wonderful connecting the church and the community and bringing the ministry outside the church,” she added.

Through the Township of Hamilton Cares Initiative, developed in April to address the growing need in the community, about 30 volunteers including those at First UMC have been feeding about 500 people each week in part from its Main Street Food Pantry, which opened its doors about 12 years ago.

First UMC is a vital part of this partnership between the Hamilton Township School District, The Rotary, The Mays Landing Merchants, the St. Vincent Food Pantry, The Senior Advisory Committee, The Hamilton Township Police Department, Sugar Hill Inn, Earth Angels for Dementia and other local residents and community organizations.

While continuing its mission of providing packaged meals for the needy, First UMC realized that some food needed to be delivered to those who are unable to get to the pantry, including children and senior citizens. The school district stepped in to take on that role. School leaders had already instituted a plan where children from the district were being fed, but the new initiative expanded that to include all families with children and seniors.

Amy Reina Hassa, a school board member and mother of two, said, “It just started with a question, but having everyone together who needed to be involved allowed us to formulate the answers. This allows for systemic change and allows each person to do what they do well. It’s when you put them together that the real magic happens.”

Hassa added that Ross was an integral part of making this all happen. “You need a courageous church leader who’s willing to say let’s connect, and Pastor Linda was that leader. If we didn’t have her, none of this would have happened. There was never a moment of hesitation on her part, and the focus was on the entire community, not just her own church.”

Ross said she is overwhelmed by the outpouring of support the pantry has received that has allowed them to further their efforts–from the school district’s institution of a hotline for the needy to the donation of prepared meals from the Sugar Hill Inn.

One of those people is Lt. Christopher Prychka who has been on the Hamilton police force for 23 years. Together with the police force he has helped facilitate the delivery of food by offering rides to volunteers, ensuring proper signage is in place and supporting the emergency management part of the effort.

As a Salvation Army unit, First UMC is able to purchase food from the South Jersey Food Bank in Egg Harbor Township, which also donated 80 emergency starter kits. But a recent grant from the NJ Pandemic Relief Fund allows them to also purchase paper supplies and other items they might otherwise not be able to afford.

Now in addition to food, the church is able to distribute these items to those in need. But Ross added, “The need is starting to grow with unemployment rising and businesses closing.” She is showing no sign of slowing down the effort. As long as there is a need, she and her church will continue to be there in a big way.