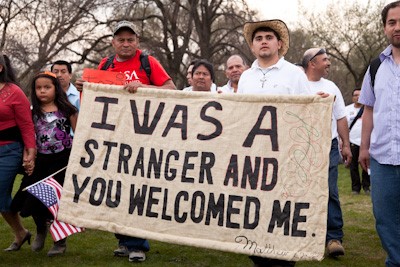 When a foreigner resides among you in your land, do not mistreat them. The foreigner residing among you must be treated as your native-born. Love them as yourself, for you were foreigners in Egypt. I am the LORD your God.–Leviticus 19:33-34

For some immigrants, hard work, support from family and opportunities along the way allow them to achieve excellence; they have a voice to shape their own lives, a place to belong and room to thrive, but for the millions of undocumented immigrants, that trajectory has been broken or stymied by bureaucracy, language barriers and restrictions imposed amid the pandemic.

Recent immigration policies have jeopardized the lives of immigrants, the majority of whom are Latino and Black and are already living with the heightened terror of being torn from their families and homes. For many asylum seekers today, that path, often a solitary one, is riddled with pitfalls that have only become exacerbated by COVID-19 and the economic and healthcare challenges the pandemic brings.

Throughout GNJ’s history, churches have been committed to the United Methodist philosophy of engaging in ministries of mercy and justice that support the immigrant community. A special task force of people throughout GNJ sustains that commitment by providing leadership and resources on this issue through the GNJ Board of Church and Society. Rev. Tanya Bennett, who chairs the committee, has pivoted the group’s focus toward anti-racism.

Also helping to ensure the safety and wellbeing of immigrants are the GNJ Hope Centers, First Friends of NJ & NY and the newly formed Justice for Our Neighbors (JFON) of Delaware Valley.

“For me immigration has always been part of the story. In one sense I’m trying to pay it back,” said Rev. Mark Salvacion, executive director of JFON of Delaware Valley (25 percent of his appointment), a pastor at St. Georges UMC in Philadelphia and a lawyer for the past 20+ years.

But at the core of his wealth of experience is the fact that he is a first generation American of Filipino parents who emigrated here in the 1950s. He recalled how when his father who was a well-respected medical doctor faced an order of deportation in 1962, his patients and members of his community took action by starting a letter writing campaign. This grassroots effort led to Congressman Peter Frelinghuysen introducing a private bill that made it possible for his father to remain in the United States. The Immigration and Naturalization Act of 1965 furthered this effort by putting an end to long-standing national-origin quotas that favored those from northern and western Europe and led to a significant immigration demographic shift in America.

Fast forward 55 years and JFON is striving to make a difference in the lives of all immigrants no matter their country of origin. According to Salvacion, who left a long career as a corporate lawyer to use his legal skills for something good, they are 85-90 percent more likely to be deported without a lawyer.

The organization is a ministry of hospitality that welcomes immigrants by providing affordable, high-quality immigration legal services to low-income immigrants, engaging in advocacy for immigrants’ rights and offering education to communities of faith and the public.

From the Roma “gypsies” of Romania to Mexican day laborers to Dominicans, Hondurans and other people escaping persecution and violence, the new JFON team is already providing legal services on a pro-bono basis and protecting immigrants from the many who prey on their vulnerability and lack of resources.

Now with a more regional focus, JFON of Delaware Valley will focus its efforts on underserved rural farming communities within the Delaware Valley, including Bridgeton, NJ, and Dover, DE, by setting up regional legal clinics on a regular basis and providing P.O. boxes at local churches where important mail, often containing court order appearance dates, can be received.

“We want to be where they are,” said Salvacion who added that by eliminating the distance undocumented immigrants have to travel and ensuring that they don’t miss vital court dates, they are making the justice they deserve more accessible to them. “We will never turn away an immigrant in need based on an inability to pay legal fees.”

The regional team is prepared to help their clients with preparing immigration forms, visa applications and citizenship documents; preparing applications for political asylum, temporary protected status and US-visas; counseling immigrant clients about their rights and about U.S. immigration and nationalization laws; and litigating immigration cases before the U.S. Department of Justice and U.S. District and Appellate courts.

Salvacion noted that U.S. Immigration and Customs Enforcement (ICE) has become so connected to some local police departments.

“A simple traffic stop can result in a detention,” he said, adding that in as little as 36 hours the immigrant may be transferred from a local police jail cell to ICE detention.

In an effort to avoid this exchange by bringing the legal counsel they need to where they live and work, the first regional clinic is planned for February 20 at First UMC in Bridgeton, NJ. Due to COVID restrictions and cleaning protocols, JFON-Delaware Valley will be setting appointments for 12 clients. The group has partnered with the Migrant Farm Worker Legal Clinic at Villanova University for advice and resources.

“As time goes on, we will offer childcare at the clinics and expect to see dozens of clients at each clinic,” said Rev. Tom Lank, Northeastern Jurisdiction Volunteers in Mission Coordinator who is facilitating this new GNJ Hope Center along with Cricket Denton Brennan, a lay leader from Seaville UMC and recent graduate of Drew Theological School.

The group has qualified for a matching grant offered by the national JFON organization that will match up to $40,000 raised on a dollar-for-dollar basis. If the matching grant fundraising meets this goal,  JFON will have raised its first $80,000 in operating funds. This will also allow them to become the 20th affiliate of the national JFON, which can provide them with valuable resources and close the gap of services that now exists between New York and Baltimore.

Lank noted that the local organization has also received a GNJ Peace With Justice Grant,a generous donation from Haddonfield UMC as well as other diverse funding sources including individuals, granting organizations, churches and immigration-related nonprofits. They have also applied for a Community Outreach Grant.

Prospective donors may support Delaware Valley JFON by writing a check payable to “Delaware Valley JFON” and sending the check to Historic St. George’s UMC, 235 N. 4th Street, Philadelphia, PA, 19106. Electronic donations may be made via the Historic St. George’s UMC website, www.historicstgeorges.org, by clicking on the “Donate to JFON Now” button.

On February 19, 1999, with a tourist visa in hand, 15-year-old Rosa Santana emigrated by herself to the United States from Honduras to meet her mother. In 2010, following the detainment of her uncle, she started volunteering at First Friends of New Jersey and New York, another one of A Future With Hope’s Hope Centers.

She worked hard to get him released. That turned into a part-time job a year later and then into the role as a full-time program director for the organization that for 23 years has provided compassion and hope for immigrants through volunteer visitation, resettlement assistance, advocacy and compassion.

Santana said, “Our goal is to make sure their dignity is respected, and their rights are not being violated. We need to hold community officials accountable.”

Among other services like resettlement and advocacy, First Friends provides money to detainees so that they can make phone calls to family; operates a letter writing service in the detainee’s native language so they can stay connected to the outside world; and they recently set up a video conferencing system so families can visit safely.

She added, there are about 700 adults detained in the four facilities in Bergen, Hudson and Essex Counties and at the Elizabeth Detention Center. This is down from the 2,200 being detained prior to the pandemic. Nationwide as of August 8 there were more than 21,000 immigrants being detained with more than 4,500 cases of COVID-19.

“People have been here for many years, and many are essential workers. Many of them pay taxes, but they can’t get the money they need for vital things like healthcare,” Santana said.

Now with a $25,000 grant from the New Jersey Pandemic Relief Fund and in partnership with Church World Service, First Friends will be able to provide those detainees with vital supplies once they are released.

“The community is very vulnerable. They need an immense amount of help,” said Santana who recalled an immigrant from El Salvador released a year ago after spending two years in detention. He recently lost his job because of the pandemic so remaining outside of detention will be difficult for him.

Santana has recently left First Friends to work at the New York Immigrant Freedom Fund/Brooklyn Community Bail Fund where she will continue to help those in detention joining team while also serving as the Detainee Advocate at the Hudson County Jail and a member of the Essex County Civilian Task Force.

Advocates for this underserved population abound in GNJ, some of whom can empathize in part with their plight as it reflects their own experiences.

At 16, Rev. Kay Dubuisson emigrated to the United States from Haiti along with her mother and three siblings. Although her mother never learned to read and write, Dubuisson embraced any opportunity that came her way, including an education. Now the pastor at Spring Valley UMC, she is reminded how difficult life can be for an immigrant as her church continues to serve the diverse community with food and love.

“Many of our people are immigrants, undocumented ones. They are fearful, but as United Methodists we are called to love our neighbors and that is what we are doing.

“I’ve been there. I know what they are going through. They need to know they matter,” Dubuisson said. “We welcome them in our midst. We will not inflict any harm on them. We love them no matter what their past holds. And it’s more than just food. It’s the camaraderie, trust, conversation, prayer, a hug. We just open our arms and accept them the way they are.”