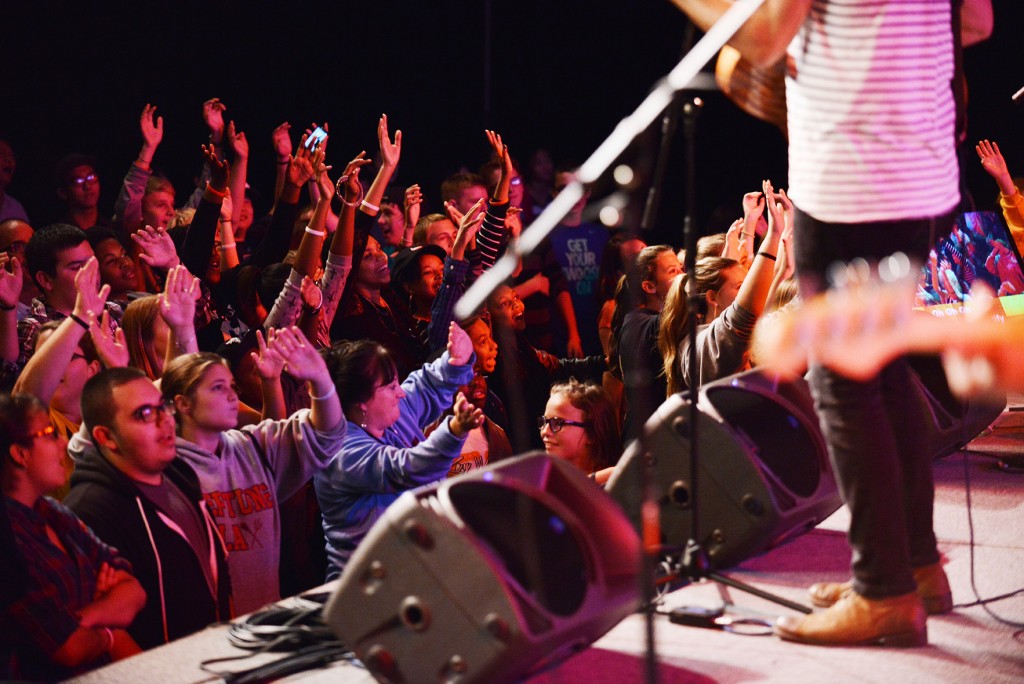 While the musical styles of Phil Wickham and KB are vastly different, they are on common ground when it comes to believing how music can make a difference in a person’s life.

The two performers have experienced that difference personally and hope those who attend the IGNITE Youth Conference, where they will be performing on Oct. 2-4, can have the same type of experience. “Growing up, I loved listening to worship music,” said Wickham, who specializes playing that style now. “When I was in youth group, the praise band was a new thing. There were groups like Passion and Vineyard Music, and they weren’t playing your run of the mill songs. They were very distinct and very poetic and they were really special moments for me. “It felt so inspiring to know that I didn’t have to fit into a system.”

KB, who is a rapper, had his special experience after listening to a Christian hip-hop CD. He was brought up learning how to play the trumpet, yet he was still attracted to a different sound. “Someone gave me a Christian hip hop CD,” KB said. “I loved every single song on it. The eighth song was a gospel presentation and that’s when I accepted Christ and that marked when I started my journey.”

KB’s journey continued this spring when he released the album, Tomorrow We Live, on Reach Records. One of the major goals of the album is for KB to be honest about where he is in his spiritual journey. “A part of being truthful is not just pointing out Biblical facts, but being truthful is being honest about what you are going through,” he said. “David in the Psalms, says, Oh, God why are you sleeping? “Theologically that doesn’t stand up because God never sleeps. It was emotionally and experientially accurate for what David was going through. It’s important for an artist to have that accuracy and truth.”

Wickham also had his own questioning experience. As one who makes his living by singing, he had to have surgery on his vocal chords last year and go without talking or singing for six weeks. When he was allowed to use his voice again, he wasn’t sure how it was going to sound. “It was scary and hard to be silent for six weeks,” he said. “It started me on a deeper journey. It made me realize even more that Jesus really does love me and if I really believe it there is joy and hope and no fear.”

Wickham, who will perform throughout the IGNITE weekend, plans to share those experiences on a new album that is likely to be titled Children of God to be released sometime later this year. “It echoes some of the stuff God has been showing me,” he said. “It’s just to remind the church of what our identity really is. We need to believe what God actually says about us. Once you really believe and understand it, you start living like it.”

KB, who will perform on Saturday night at IGNITE, talks about the struggle to believe fully in the song, I Believe, which contains the words for his new album’s title. “I love the song I Believe and love doing something special with it when we perform it live,” KB said. “I love painting a picture of what we believe in spite of us. Everyone is fighting a battle of some kind.”

However in the midst of whatever struggles people, young or old, may be facing, KB hopes they don’t forget that music can be simply enjoyable, too. He certainly wants that to be part of the experience of seeing him in concert. “I want people to have fun and experience their lighter side, but also to experience some of the heavier things,” he said. “I hope that they leave with the overwhelming sense of how wonderful and how good God is. I really want eternity held in the balance of my listeners. There is nothing bigger than eternity and I like to make that clear for the audience.”

Find out more about IGNITE and Register Here