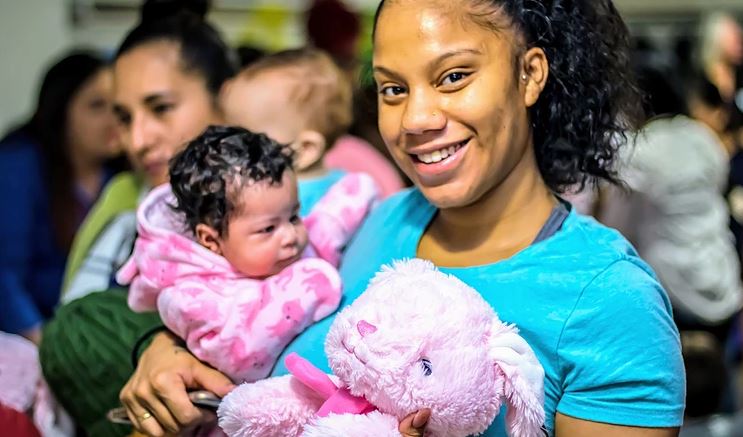 A volunteer holds one of the guests of honor at the Maker's Place Diaper Party on March 2. Photo provided

TRENTON – Trenton’s children, parents and caregivers were celebrated at the first ever Diaper Party on March 3 hosted by The Maker’s Place, a GNJ Hope Center.

Last Christmas, The Maker’s Place spearheaded a diaper drive which collected over 90,000 diapers from United Methodist Churches throughout GNJ to be shared with the city’s low-income families with babies.

The Diaper Party featured face painting, activities for kids, a mini resource fair for parents, and more information about The Maker’s Place.

“We celebrated,” said Rev. Michael Reed who heads up The Maker’s Place. “We talked about how every child in Trenton can have a first birthday to celebrate at upcoming diaper events.”

Reed said that The Maker’s Place is dedicated to building relationships with the people in the community.

“The word is getting out,” he stated. “People are starting to tell their friends.”

Trenton, which has one of the highest infant mortality rates in the U.S., is on a path toward changing that statistic, in part through the transformative asset-based community development of The Maker’s Place.

“We followed our assets, and the aspirations of people living in poverty, to determine our first step into ministry,” said Reed.

“We’re still in our infant stages,” said Reed. “Metaphorically and also quite literally. The Maker’s Place is in diapers!”

“We wouldn’t be staying true to what we believe if we set up a system where some only give, and others only receive,” he said. “So at the diaper party, we didn’t ask about people’s level of income, or require any form of documentation to attend. We just don’t think people should have to trade their dignity to receive our charity. That’s not a party.”

Volunteers worked the room, introducing themselves and building relationships. A “Maker’s Place Mural” was set up on black canvas paper with the words “Share Your Dreams” written above. Guests, volunteers, pastors, social workers and attendees were invited to take a crayon, trace their hands on the mural and write their hopes and dreams for themselves, their children, and their neighbors.

When asked what The Maker’s Place was all about, the mural showcased the answer.

“We’re a new group in Trenton, and we’re here to do that,” said Reed, pointing to the mural.

People were told that The Maker’s Place was committed to more than just giving away diapers but also to add the communities’ gifts and aspirations so every child in Trenton can grow up in a thriving community and so people can experience a life that is “good, abundant, and touched by the love of God,” said Reed.

With The Maker’s Place still in its infancy, Reed hopes that it too will grow into the very mission it seeks to accomplish.

“It could be that someday, we grow out of diapers,” said Reed. “It also could be that diapers become our thing, and that as we grow, we’ll add on other forms of ministry for people at other stages of life. Whatever we do, we’ll always be asset-based, starting with what we have and working together to make it grow. And no matter what, we’ll aim for mutuality and dignity, inviting people we meet to join with us and with God, working hand in hand as co-creators of a better life together.”

Find out more:
The Maker’s Place is looking for early adapters to dream and become active in their mission by incorporating their passions, gifts, ideas and interests. They also seek prayer going forward. If you want to volunteer, give, collaborate, or find out more information, visit www.makersplace.org or email Rev. Michael Reed at michaelreed@makersplace.org