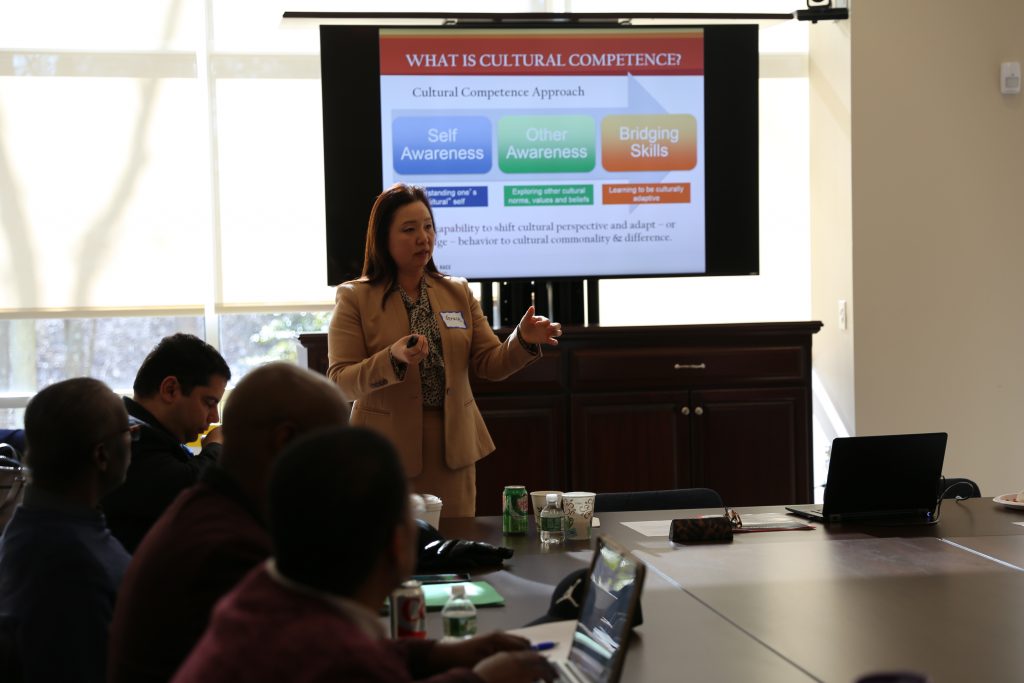 Grace Pak, Director of Cross Cultural Leadership at the Commission on Race and Religion is pictured leading a Cross-Cultural, Cross-Racial Training session at the Mission and Resource Center. Photo by Josh Kinney

NEPTUNE – Rev. Sooah Na didn’t know what to expect at GNJ’s first Cross-Cultural, Cross-Racial training. Newly appointed to Community Church in Hoboken, Na and one of her church leaders attended the training to learn what they could.

“It was an eye-opening experience for me,” said Na.

At the 2017 Annual Conference session, GNJ approved a ten year intercultural competency plan that will develop laity and clergy to continue strengthening and growing diversity, inclusion, and collaboration in local churches and communities.. As part of this commitment, GNJ started offering a Cross-Racial and Cross-Cultural Training in 2017 for pastors and churches who receive a cross-racial and or cross-cultural appointment.

GNJ has partnered with The United Methodist Church’s General Commission on Race and Religion for this resourcing and learning experience with the intent of providing pastors and laity with the awareness, barriers, challenges and blessings of cross-racial and cross-cultural appointments, as well as building new skill sets and learning to welcome and embrace new pastors. On July 21 2018, GNJ will host another Cross-Cultural, Cross-Racial Workshop for churches who received a new appointment in 2018 that is cross-cultural and cross-racial. The pastor and a small group of laity will be invited to the workshop by their District Superintendent.

“Through the training, we had a wonderful opportunity to identify who we are and what challenges, joys and opportunities we might have,” said Na. “It was a wonderful, healing and encouraging time when we listened to other churches share their experiences. We laughed, shared concerns and understood together by listening to our churches stories.”

Having grown up in a pastor’s family in South Korea, Na served Korean Methodist Churches and in the U.S. served as a children’s pastor, music director, and student pastor. Now she is living into her calling as Hoboken’s Community Church lead pastor. She was inspired at one of the trainings when the group took a new approach to read Acts 8:26-40 regarding Philip and the Ethiopian eunuch.

“One thing that came to mind was that the Angel of the Lord said to Philip to go south to the road, and it was ‘wilderness,’” she said. “Philip met the Ethiopian and made a disciple by teaching about Jesus Christ and baptizing him by water and the spirit.”

For Na, she believes the cross-racial, cross-cultural ministry is the ‘wilderness.’

“I believe that this is a worthy journey for us, first of all, because God told us to go. Second, because unexpected joys will be waiting for us at the end of the journey’s road of this ministry, such as making more disciples of Jesus, becoming active and welcoming churches toward local community and having teaching moments for each other and being churches at the hub of world mission.”

Rev. Myounghun Stephen Yun, Pastor of Succasunna UMC in western Morris County felt the trainings provided him with useful conceptual frameworks and tools for self-reflection as a pastor serving in a cross-cultural and cross-racial appointment. Born and raised in South Korea, Yun came to the U.S. at 27.

“As a cultural bearer, I know that I will always carry my cultural and ethnic identity into my ministry in one way or another whether I intend it or not,” said Yun. “I also know that there are times when I submit to or fully immerse myself in a culture where I am serving.”

Yun believes the key to cross-racial, cross-cultural ministry is to cultivate self-awareness and grow in intercultural competency as emphasized in the trainings.

“The trainings reminded me that learning how to cross into someone else’s cultural world first requires a growing understanding of my own cultural self.,” Yun said.

One of the exercises conducted in the training showed the group that multiple parts make up a cultural identity, such as organizational belonging, work, faith tradition, income, race, ethnicity, age, gender and sexual orientation, and that every relationship is cross-cultural in one way or another.

“This training wasn’t just about the relationship between myself as a Korean pastor and my congregation that is predominately white,” said Yun. “For us it was more about how we could build a better cultural understanding in our church and the surrounding community and how we, as a community of disciples could continue to welcome and reach out to strangers, especially those who haven’t been reached out to, are neglected, or are marginalized.”

As a way of implementing some of the training’s insights, Succasunna UMC organized a hospitality ministry team and prepared to build evangelism ministry. They also recently held an event called “International Dinner Night” where the congregation was to invite family and friends in the community. While sharing 36 different cultural dishes with over 110 people, the church celebrated cultural diversity within and among themselves, affirming it as ‘God’s gift.’

“The affirmation was that my difference from you is my gift to you. Your difference from me is your gift to me,” said Yun. He added, “It’s a saying I learned from my candidacy mentor, Rev. Brandon Cho.”

Yun acknowledges that problems can arise due to lack of self and other-awareness as well as the fear of the unknown or the new.

“There is virtually nowhere we can go without having to deal with people who are culturally different from us in our everyday lives and ministries today,” said Yun.

Amid GNJ’s commitment to diversity, there is significant room to grow, with racial ethnic diversity representing 22% of weekly worshipers, yet almost 50% of the state’s population. Rev. Juel Nelson, Director of Leadership praised GNJ for its ever-growing diversity.

“We want to encourage these cross-cultural, cross-racial opportunities because they bring more richness to our churches,” she said.

Rev. Sung Chun Ahn of Centenary UMC in Berlin attended two of the trainings and described the experience as “tremendous.”

“We were able to have a chance to think about basic questions like ‘what is culture?’ ‘what are cultural differences?’ and ‘how can we understand each other?’” said Ahn. “Fundamentally, the main focus of the questions was to open ourselves up for new challenges. Transition is not always an easy process for both clergy and congregations. A cross racial cross cultural pastor brings a whole different culture and it can be a cause of conflict between an old and new atmosphere and anxiety that relates to the new experience. But I believe cross racial cross cultural ministry is a blessing from God, because God calls us to the particular church setting we’re serving for God’s Kingdom. The more I open myself, the more my congregation opens themselves as well. The best practice is to do what Jesus taught us: love one another as we love ourselves.”