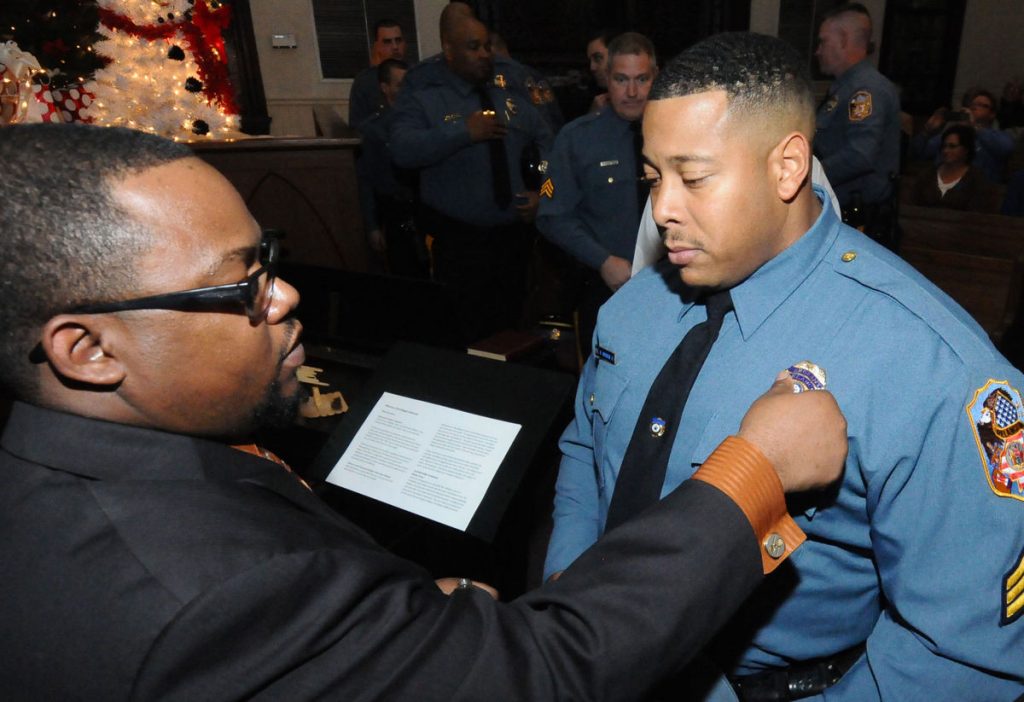 Dobbins UMC partnered with My Father’s House Ministries in Delanco for a ‘Blessing of the Badges’ service for their communities first responders. Photo by Carl Kosola of The Burlington County Times

Rev. Chuck Mitchell of Dobbins UMC in Delanco Township felt a debt of gratitude to the first responders in his community. Knowing that the men and women of the police, fire, and EMT squad dedicate their lives to the service of protecting others, he decided to dedicate a ceremony to honor them.

Delanco Township clergy blessed their community’s police officers, firefighters and EMS workers at a “Blessing of the Badges’ ceremony on Dec. 13 at Dobbins Memorial UMC.

Mitchell partnered with Rev. Donshae Joyner of the Delanco grassroots ministry ‘My Father’s House’ in facilitating the service which included prayers for first responders and remarks from clergy and Delanco Mayor Kate Fitzpatrick.

“The vision here was to provide an opportunity as a church to show the community that we care and want to provide a safe place for first responders to be present,” said Mitchell. “We wanted to pray for them, that God would continue to be with them and give them patience, strength, compassion, and grace whenever they encounter difficult aspects of their jobs.”

Joyner, an African-American pastor, joined Mitchell in sending a message of peace and unity. Dobbins UMC youth leader Dave Gannon assisted by anointing the foreheads and badges of the first responders and praying with them. He also serves as Chaplain of Hope Hose Station 122 in Beverly where he has volunteered since age 17.

“For me, the blessing held a special place in my heart because I was blessing the badges of those who I consider to be brothers and sisters,” said Gannon. “With everything that is going on in the world today, I thank God that He has given me this opportunity.”

In the midst of recent political turmoil and negative police stories in the national news, the ceremony was intended to display trust and appreciation for the work of the first responders.

“We as a community should come together and ‘Bless the Badges’ to let them [First Responders] know that we stand behind them, value their service and pray for their safety,” Fitzpatrick said.

Mitchell was inspired by a similar event organized by a colleague in Moorestown last September. Although the ceremony is spreading nationally, he was unaware of another community in New Jersey other than Moorestown that had participated and decided to start with Delanco.

“We want everyone to connect with each other, and my goal is that every community will start to do this,” said Mitchell. “Our goal and vision is always to help the hurting and the lost, but we should also be acknowledging the partnerships with those who are serving to protect us as well.” He added, “Throughout the United States, a lot of our police officers are not getting the appropriate support. I wanted to paint the picture that they matter to us. That all the people in our community matter to us.”

According to Mitchell, the service was less about religion and more about showing gratitude and support for the first responders. He noted that unlike veterans, first responders do not have a formal day of acknowledgment.

“I started feeling the tension in our country and felt that we needed to remember those who are really doing their best to serve our communities,” said Mitchell. “We wanted to lift them up specifically, showing our support. They’re walking into dangerous moments, and we want them to know that we love and care for them and that we’re here for them.”

Delanco Chief of Police Jesse DeSanto felt “truly appreciative” of the service and praised Mitchell and Joyner for their joint-effort.

“They made is so easy for us,” Desanto said. “We just had to get everyone there and show up, and they took it from there.”

Desanto thought the program, audio, visual, music and timing of the ceremony was “absolutely excellent.”

“It was really nice that something like this was organized for us,” said Desanto. “It meant a lot that the community came out to support us.”

Delanco Fire Department Chief Robert Hubler Jr. and Matt Bartlett of the Emergency Squad were also in attendance and spoke about how much they value their community.  The fire department and the EMS squad, both made up of trained volunteers, organize fundraisers that serve as the primary source of income for their operations outside of responding to emergencies and continuing their training.

The ceremony featured a theme exploring the origins of badges and how they came to be. For first responders who were unable to attend, their badges were anointed. Police, fire and EMS retirees, church members from the small, tight-knit community, as well as clergy and laity, made up the gathering of about 100.

“I want to express my biggest gratitude to the United Methodist Church for taking the time to recognize us in this way,” said Desanto, who left the ceremony feeling inspired. “I just can’t say enough. I am so impressed and so pleased.”

Desanto noted that he and the 12 members of the Delanco Township Police would usually feel uncomfortable in the limelight, but felt a sincere appreciation for what was done for them.

“It was well worth our time,” he said.

Mitchell’s aim was to focus the service on blessing the officers with the patience and courage needed to perform their jobs.

“With everything that’s going on in our culture right now, with the mistrust and skepticism in police and others, I felt like this was something we could all do to support our first responders in our community,” said Mitchell. “Without having a political climate, we’re saying we love you and support you.”