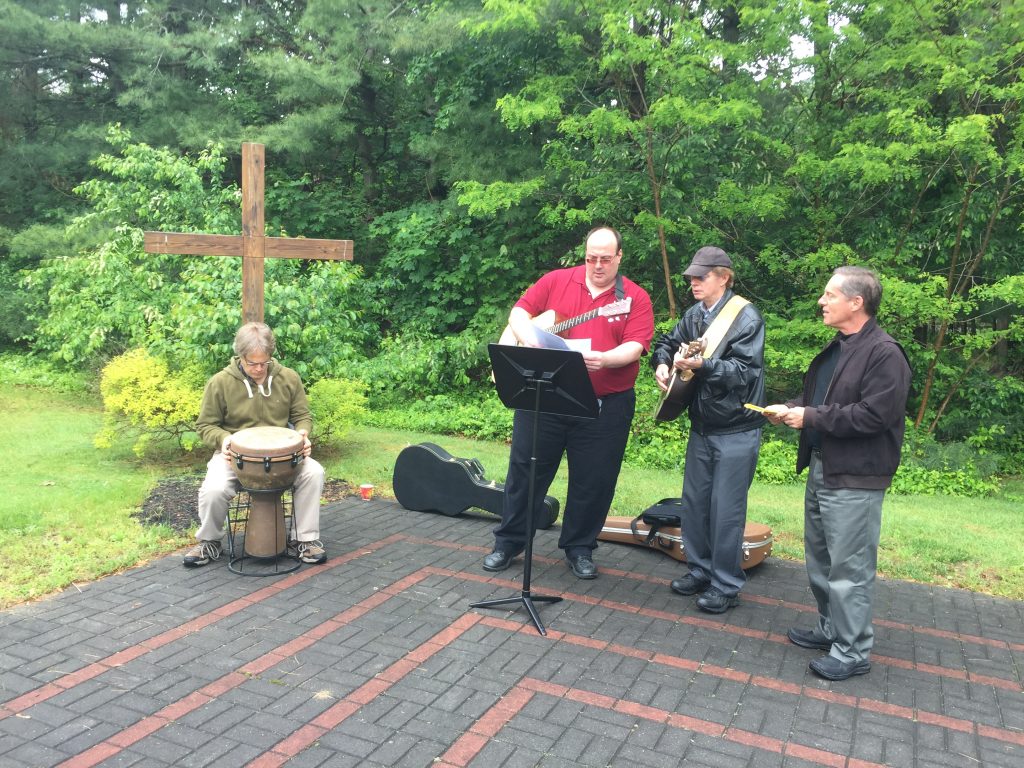 The Prayer Garden at First UMC in Oakhurst has become a place for the surrounding community to enjoy. Photo provided

OAKHURST – Ocean Township resident Gayle Fitzmaier has been a member of First UMC in Oakhurst for the past 30 years, however recently, she found another calling.  “The Prayer Garden,” uses what was once an underused and dormant space to become  a place of serenity and prayer, surrounded by nature, for all in the community to utilize freely.

“The purpose of this garden is to have a peaceful area to pray and an area outside of the Sanctuary to worship,” Fitzmaier said. “Additionally, it is an area to honor and memorialize our loved ones. Welcoming the community to use the garden is also part of its purpose. Our church members have responded favorably as they like the idea of worshiping in a natural environment and out in the open.”

According to Fitzmaier, who is the Prayer Garden Committee chairperson, the idea of the garden came about in early 2015 when she initiated the concept due to the area rarely being utilized. Before the location was “re-purposed” as the Prayer Garden, it was called “the Labyrinth.”

Located on the north side of the church, it is accessible from the sidewalk by a paved pathway. Many of the bricks along the pathway have been purchased in honor or memory of a loved one with the area being approximately a half acre.

“I truly believe that I was inspired by God to re-purpose the area,” exclaimed Fitzmaier. “ I brought it up to the governing body of the church and with their support, led a campaign to remove and re-purpose the area. A vote was taken and the name became ‘The Prayer Garden.’”

Several additional donor brick campaigns followed as well as a massive cleanup and a dedication ceremony on November 1, 2015.

“One of our missions for the garden was to open it to the community. There is a new sign near the entrance that says, ‘The Prayer Garden.’ U R Welcome,” Fitzmaier said.

The garden contains a 32 foot by 32 foot square seven circuit design paved labyrinth, a large wooden cross built and donated by a church member, three standard benches, a square bench, a prayer card mailbox and 113 donor bricks along the pathway. There are several trees, memorial plaques and four benches bought and dedicated to the memory of church members’ loved ones. Planting and weeding is done throughout the year and deer resistant flowers have been a primary focus. Church members have been encouraged to plant as the spirit moves them.

Small services were held in the garden with the church’s Praise Team. A prayer card mailbox was added in September of 2016 with signage inviting community members to complete a prayer card that will be prayed over by the church’s weekly Women’s Covenant Group. The garden has been used as a place of worship for a sunrise service on Easter morning, two summer worship services, and a Communion celebration.

“We have only just begun,” Fitzmaier said.  “I truly hope members of both the community and the church will spend some time in prayer and contemplation in the garden,” said Barbara Gruezke, Prayer Garden Committee Member and GNJ Insurance Administrator.

Rev. Mark Ale, who has been actively involved with the garden, added that he is pleased to be able to offer this place to everyone.

“It’s a place of peace and prayer surrounded by the beauty of nature where anyone from our community can spend time in thought, prayer or meditation,” he said. “It is now a worship and prayer area enjoyed by the church members as well as the community. There is new enthusiasm for the outside worship space. We hope that people will experience God’s love in the garden. We want people to know that they are not alone. If there is a need to share a prayer we will help. We hope it continues to grow as an outreach to the community.”

For more information about The Prayer Garden, contact First UMC at (732)531-1150. The church is located at 103 Monmouth Road in Oakhurst.