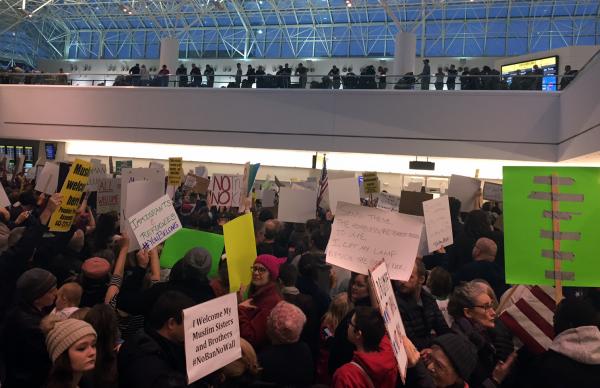 Park UMC in Bloomfield is one of a number of churches in Greater New Jersey that is concerned about President Trump’s recent executive orders on the subject of immigration and refugees.

The executive order, which bars refugees from seven majority-Muslim countries for 90 days until sophisticated vetting measures can be implemented, has been met with opposition from local, regional and national faith leaders including leaders from the United Methodist Church.

Rev. Joel Hubbard, pastor of Park UMC and an organizer of the Interfaith Partners Network, which includes Temple Ner Tamid in Bloomfield and Glen Ridge Congregational Church, expressed his disappointment.

“For my part, both Park United Methodist Church and Interfaith Partners are disappointed in the president’s recent expectation of an executive order on immigration,” said Hubbard.

Over the last several months, The Interfaith Partners Network, in partnership with regional and national organizations, has helped refugee families, including those from Syria, resettle in the northern New Jersey region.

Hubbard said that the network remains committed to providing care, refuge and sanctuary to the refugees in America and has reached out to Djanna Hill-Tall, chair of the Bloomfield Civil Rights Commission, about collaboration.

“What we try to do is not be knee-jerk, but to be thoughtful in our responses,” Hubbard said.

Hubbard expects that the Interfaith Partners Network would likely gather to discuss the subject within the coming weeks.

In addition to the reaction from local churches, there has been a growing number of denominational leaders expressing their concern about the executive order.

The Northeastern Jurisdiction of the College of Bishops has also released a statement saying in part, “Today there is a disconnect between the position of the country and the mission of the church.”

Harriett J. Olson, top executive of United Methodist Women (UMW) also made a statement of concern, “United Methodist Women takes to heart Jesus’ commandment to love God and love our neighbor as ourselves. Throughout our 150-year history, we have carried this out by extending God’s love to women, men, youth and children around the world, including immigrants and refugees.”

Thomas Kemper, top executive of the United Methodist Board of Global Ministries stated, “I pray that the Trump administration will be guided in its immigration policy by international standards of human rights and respect for migrant workers as stipulated by United Nation’s Conventions.”

“I am deeply troubled by the abruptness and speed of the changes that do not allow for fuller understanding and conversation especially regarding immigration,” said Bishop John Schol. “While the decision may be based in law, we as disciples of Jesus Christ have a responsibility to ask moral questions as well. I call all United Methodist to pray for our nation, our president and how we engage with one another and the world.”

Bishop Bruce R. Ough, President of the Council of Bishops of The United Methodist Church released a statement in which he said, “I call upon the people of The United Methodist Church to see the face of Christ in the refugee. Say “no” to the walling off of our country and our hearts and say “yes” to their hope – our hope – for new life. Let us unite and work together to bring the soul of this country to a living birth!” The full statement can be read at UMC.org.

The United Methodist Church’s official stance regarding immigration comes from the Book of Discipline and reads:

“We recognize, embrace, and affirm all persons, regardless of country of origin, as members of the family of God. We affirm the right of all persons to equal opportunities for employment, access to housing, health care, education, and freedom from social discrimination. We urge the Church and society to recognize the gifts, contributions, and struggles of those who are immigrants and to advocate for justice for all. We oppose immigration policies that separate family members from each other or that include detention of families with children, and we call on local churches to be in ministry with immigrant families.”