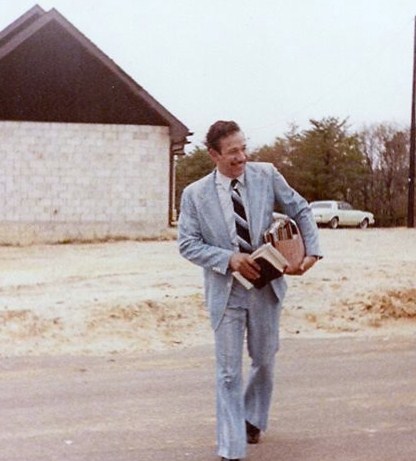 WEST BERLIN – St. John’s United Methodist Church member Virgil Williams has belonged to the West Berlin based church since 1977 – more than 41 years. She purchased a house in the town and was thrilled that her church was within walking distance to her home. She quickly became an active member, joining the gospel choir, “The Hearts of Joy” and became involved in many of the church’s activities.

Over the years, Williams started to create historical plays for the congregation.

One of her most recent and detailed plays to date has been the presentation of St. John’s United Methodist Church’s history through folk stories which began when the church’s historian Beatrice White asked Williams to work with her on a celebration of the church’s anniversary.

“She put me in charge of the program aspect and since it was an anniversary, I thought we would do a presentation of the church’s history,” she said.

Williams walked the neighborhood around the church community in West Berlin, searching for a glimpse of St. John’s UMC history, interviewing many senior citizens who talked at great length about the ‘good ole’ days.’

“I listened and took notes and the result was I had my church’s history through the folk stories of its seasoned members. These results were amazing. I took those precious memories and produced a play about how St. John’s UMC began,” she said.

Williams says she wanted the program to be more than just reading the history.

“I wanted it to be something that people would remember. Folks get excited about plays and tend to be interactive. The audience did not know beforehand that the history would be presented as a play. It was well-received,” she said.

Williams described her written program as a historical play about St. John’s simply entitled, ‘St. John’s History.’ The play was incorporated with dialogue and music; the actors all members of the church. Although Williams is responsible for writing the play, she did have assistance with other elements of production including music and early history lessons of the church’s beginnings.

“Our church’s minister of music, Michael Troutman, worked with me to coordinate the music. He had been there since he was a young boy and had a natural talent for music and remembered songs during the 1960s so he was very helpful with the placement of songs,” Williams said. She continued, “The early history was provided by the writing of the pastor, Rev. Calvin Woods, during that time. After I had interviewed the seasoned church members, the history took on life. There was something very poignant and tangible that touched my heart. Hearing those stories and taking my notes, suddenly it was not just history as one would read in a book. It became images, sounds and music!”

According to Williams’ notes, St. John’s UMC came to be in September 1922. It was there at the top of the hill in a small, black community called East Berlin where the tiny country church rested on cinder blocks to keep termites away. Except for the wooden church bulletin planted in the ground outside, it had the appearance of a one-room school house. A pot-bellied stove heated the sanctuary.

Williams said her desire to write and produce the play was due to her “love of history.”

“I produced it in play form so that the congregants would enjoy and remember simple facts about the church’s history,” said Williams. “I wanted to present it in a way that was interesting and not boring. I am inspired with the interaction and learning from others. What surprised me most from the people I interviewed was their willingness to talk to me. They were eager. I learned much more from them than the facts and statistics that are recorded. Their stories brought the church to life.”