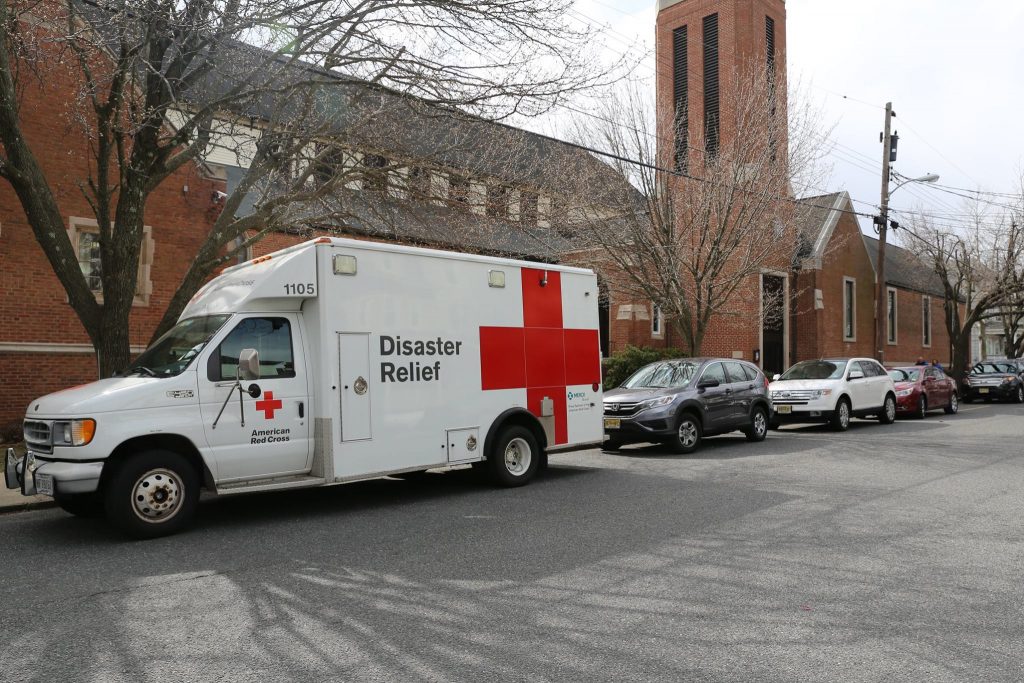 St. Paul's UMC in Ocean Grove became the central hub for the American Red Cross, helping to assist those affected by the fire. Photo by Josh Kinney

The historic Jersey Shore town which is home to the Ocean Grove Camp Meeting Association founded in 1869 by Methodist clergy, made national news as flames engulfed nearly an entire block. Smoke billowed down the coast as firefighters spent most of the day battling to extinguish the fire and contain its spread while St. Paul’s UMC in Ocean Grove wasted no time spreading assistance through food, shelter, and prayer.

The church, situated in the heart of the small, charming beach town, became the headquarters for the American Red Cross and the hub of hope and relief for those affected by the fire.

“I am so grateful that we can help in times of great need,” said Senior Pastor Rev. Rich Hendrickson. “I am so proud of our staff, church folks, and community for an amazing day of being the hands and feet of Jesus. The Red Cross did an awesome job and we were blessed to partner with them in this undertaking.” Hendrickson also serves as the chaplain for the Ocean Grove Fire Department and went to the scene when firefighters first arrived at around 5:30 a.m. to check in and seek out residents he knew evacuated. Coordinating with St. Paul’s youth pastor, Megan Faulkner, the church quickly opened up to receiving evacuees.

“We feel very strongly that part of living out the gospel is to be present in the community in ways that matter,” Hendrickson said.

“So proud of my hometown church in how they step up and lead in the care of victims,” said Matthew Mitchell, originally of Ocean Grove.

Faulkner was moved by those who came to help “create an entire culture of response.”

“A steady flow of helpers and receivers were making their way through our doors for 15 hours,” she said, inspired by her community.  “Community was not a noun for us,” said Faulkner. “It became a verb. Community is not who we are. Community is what we do.”

Rev. John DiGiamberardino, a GNJ elder appointed to serve as Chief Operating Officer of The Ocean Grove Camp Meeting Association praised the local community’s history of bonding together in times of need to help one another. Property in Ocean Grove is owned by the Camp Meeting Association, which leases the land to homeowners and businesses through 99-year renewable leases.

Throughout the day, The Red Cross in conjunction with St. Paul’s worked to actively serve displaced residents and provide them with coffee, meals, charging stations, spaces to process and pray and shelter. The Asbury Hotel in neighboring Asbury Park joined forces with The Red Cross to provide free hotel accommodations for the displaced.

“Our doors will remain open until the work is complete,” said Hendrickson.

On Sunday, March 5, the Ocean Grove community honored the first responders who helped battle the blaze with a bagpipe tribute along Seaview Avenue and collected donations for those affected.

“I’m proud of my community,” said Faulkner. “Here’s to many brighter beach days ahead.”