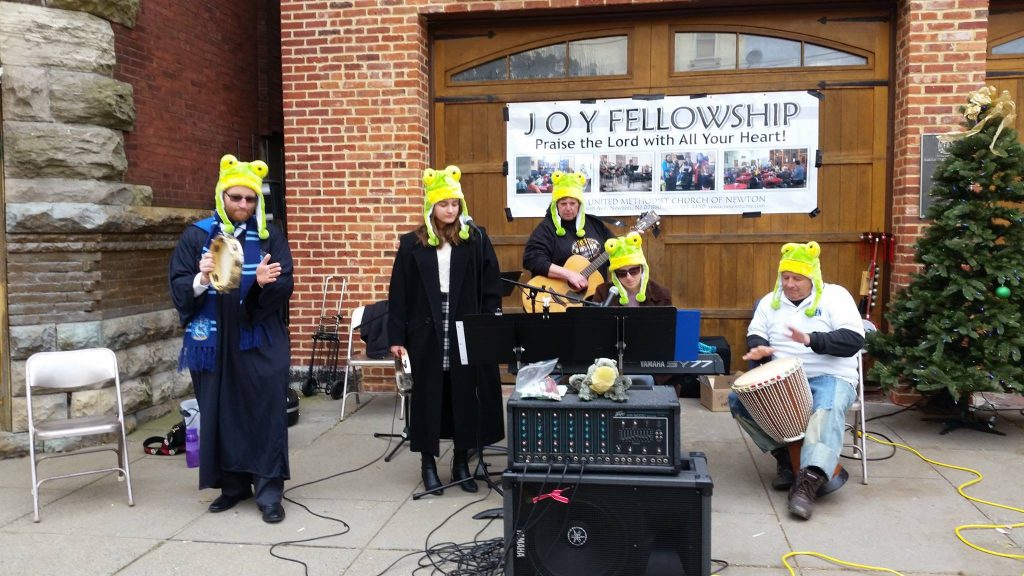 NEWTON – A group of merchants embarked on a quest to bring a little magic back to their town’s original shopping district. The once bustling Spring Street in Newton had suffering economic decline with vacant storefronts and closing businesses unable to compete with mega department stories and food chains. But on November 25, 2017, the downtown transformed into ‘Diagon Alley,’ the magical market from the famous Harry Potter series.

Organized by the group of merchants, the event featured 25 shops up and down the town’s main business district taking on a Harry Potter theme. At its center, First UMC of Newton transformed into Hogwarts School Choir of Singing Frogs.

“The organizers were truly excited to have our church join in and invited us to stand on the street throughout the event and sing,” said Rev. Todd Lattig, Senior Pastor of First UMC of Newton. “Thus some members of our choir, our worship band, youth and others from our church transformed themselves into the Hogwarts School Choir of Singing Frogs.”

Lattig made a poster and published the event on the church’s Facebook page as well as the Spring Street Merchant Circle’s page which the group also extended to the church to use for posting any church events.

Prior to the event, NJ.com published a story promoting the Diagon Alley day which was shared over 75,000 times on Facebook. Word of the event spread to Z100’s Elvis Duran’s morning show, CBS, News 12, The New York Times, and many other major outlets.

“Our church’s website visits shot up dramatically,” said Littig. “People were coming to our Facebook page and sharing our announcement with others.”

Shopping wasn’t the only attraction as aspiring Hogwarts students were placed in one of the fictional school’s four houses by “the sorting hat” a “Quidditch” lesson was offered and a”Horcrux” hunt was held. The town’s Barrel House restaurant became “The Leaky Caludron” serving butterbeer and other treats. Between The Bread, another local eatery, was transformed into “The Great Hall” and another store sold wands to young magicians.

On the day of the event, a woman stopped and asked Lattig where the best place on the street would be to start the walk down Diagon Alley.

“She then asked where ‘that church’ will be singing,” said Latting. I told her where we would be located and introduced myself to her as the pastor. It was just a divinely perfect way to start the event off.”

The little town of Newton became overwhelmed with throngs of people and two hour lines to get into shops and restaurants.

“This event has sparked hope in our community and we’re already looking to plan it even better the next time around,” said Lattig.

As for his “singing frogs,” they spent the day out in the community singing Christmas themed praises, traditional Christmas hymns, and sharing the love of Christ with countless witches, wizards, and muggles alike.

“It was absolutely amazing to be a part of and I’m so proud of our church for stepping up and taking the risk of doing something a little bit different,” Lattig exclaimed. “Who knows what might come from it, but it was simply awesome.”

Lattig seeks to challenge his congregation to become more present in the community, not just in fun ways, but to meet needs.

“This was certainly a fun event, but it also promotes the community and our involvement shows that First UMC of Newton cares about Newton, its merchants, residents, children, teens, young adults, and for the visitors who come here,” he said. “We had a blast doing it and we’re blown away by what a little faith can turn into.”