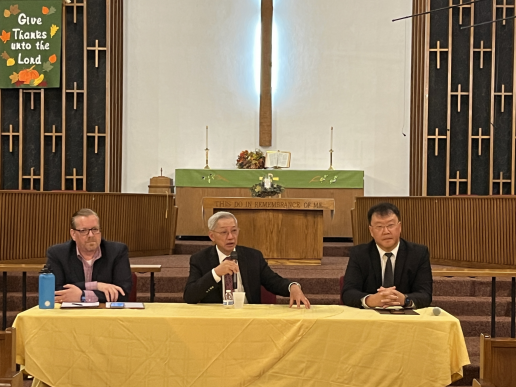 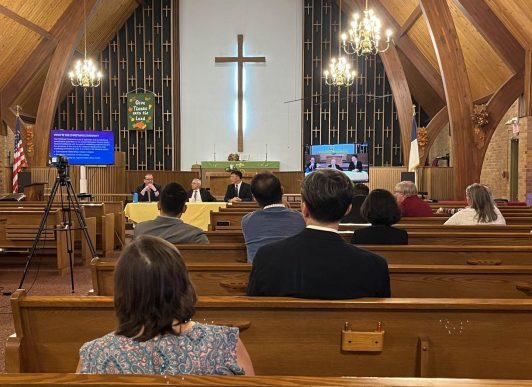 Rooted in a lamentation of how colonialism has shown itself in efforts to divide the church without hearing from the silenced margins of United Methodists outside of the U.S., African and Filipino United Methodists saw this as a “kairos” moment – an opportune time to offer a gift of hope from those in the grassroots for the future of our global connection.​ Thus, from the Cavite Annual Conference of the Philippines, the “Christmas Covenant” legislation was born.

So, what is the Christmas Covenant?

“The Christmas Covenant is a set of legislation and constitutional amendments submitted to the United Methodist Church’s General Conference with the goal of establishing regional equity in the structures of the church for missional effectiveness while sustaining connectional unity,” presented Kuan, “It is rooted in the following values: Connectional relationships rooted in mission, respect for contextual ministry settings, and legislative equality for regional bodies of the church.”

At its core, the Christmas Covenant comprises of eight petitions that will revise language throughout the Book of Discipline from central conference/s to regional conference/s that, as the Philippines’ College of Bishops wrote in a statement on August 31, 2019, quote: “have the authority to decide their witness, mission, and ministry, thus, preserving locality and connectionality.” The petitions will allow the United States to be its own regional conference with regional equity and structure (as proposed by The Connectional Table) and authorizes contextual adaptations of the Book of Discipline for missional effectiveness.

Kuan gave a powerful argument in support of the Christmas Covenant. “While diversity is a challenge, we do not believe dissolution is the right way to heal the wounds that cause us pain as Christ’s Body. A truly global church committed to be in mission together embraces its differences and allows for self-determination. It is able to find common ground in affirming how we do effective ministry in places we serve. Acknowledging that our different contexts need different solutions is a better way forward and fosters mutuality.​”

Rev. Dr. Drew Dyson also endorsed the Christmas Covenant as the way forward. “You may be surprised to know, The United Methodist Church is the only one among the 25 largest denominations in the world that is democratically-elected and representative in its polity and governance [rather than regionalized], and also global at the same time.”  Dyson continued, “The context of the space that we occupy matters in the theological and biblical interpretation and in our understanding of who we are in relationship to God. And so, for me, the Christmas Covenant moves us a step towards full inclusion. But that must be accompanied with — in my opinion as Drew Dyson — the legislation that removes the restrictive language in the Book of Discipline.”

Rev. Sang Won Doh approached the Christmas Covenant from a centrist perspective, naming his faith in a “big-tent theology” church and how in the past as a theological conservative being impacted by his progressive colleagues, especially regarding the sin of racism. “There is a one major challenge with the Christmas Covenant,” explained Doh. “It is a constitutional amendment, meaning, it requires two-third aggregate votes of all annual conferences. We have seen in the past various attempts to acquire constitutional amendments fail because of this requirement.”

But there is hope. The Christmas Covenant is now endorsed by the UMC Connectional Table, the North Central Jurisdiction, various annual conferences including the Florida Annual Conference delegation and the Mountain Sky Annual Conference, MARCHA (Hispanic/Latino caucus within the United Methodist Church), United Women in Faith, Love Your Neighbor Coalition (LYNC)​, Western Methodist Justice Movement (WMJM)​, and many more. During a time of increasing denominational divide and disaffiliations, this legislation is revealing that unity amidst differences is possible. Online participants of the presentation were thankful for the presenter and panelists, and many shared their renewed hope in the future of the United Methodist Church.

As Methodists, the intersection of a “Christmas” Covenant presentation occurring at a church named “Aldersgate” is particularly notable. Aldersgate is the name of the street where John Wesley’s heart was “strangely warmed” in 1738. Christmas is an auspicious time for Methodists as it reminds us of the Christmas Conference of 1784 that gave birth to the Methodist Episcopal Church in the United States. As the Aldersgate Street conversion and the Christmas Conference were moments in time when a Methodist revival was birthed, so the proponents and endorsers are praying that the Christmas Covenant will also be the birth a new revival of a contextual, global, and mission-focused United Methodist Church.