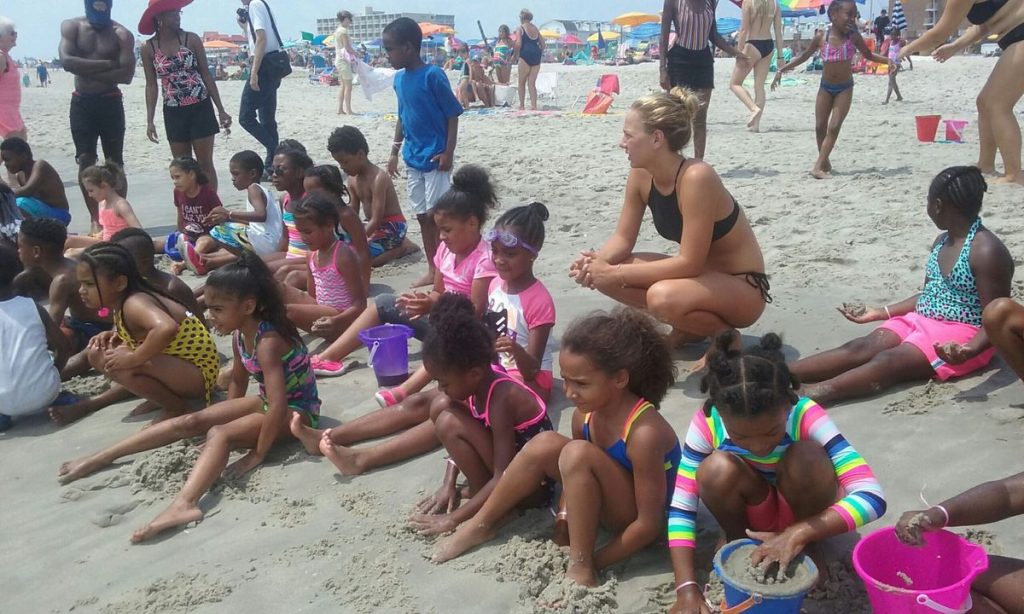 Children from Camden's Neighborhood Center enjoy a day at the beach hosted by Cape May UMC. Photo by Camille Sailer

CAPE MAY – What many who live in Cape May County can easily forget is that a day in their environment is a precious thing. The congregation of Cape May UMC realized such an outing becomes even more precious when it’s organized for children living in difficult economic circumstances from one of the state’s most impoverished environments: Camden.

With ample support from the residents and businesses of Cape May, the church was able to organize its third seaside excursion for children of “The Neighborhood Center of Camden” Aug. 2.

The center’s mission is “loving abundantly” to break the cycle of poverty by giving hope to the children it assists. The center focuses on a “two-generation approach” to eliminating poverty by not only supporting the children and by providing a safe space for academics, athletics, and art but also helping their parents by helping develop economic and social stability through community gardens, neighborhood safety watches and health lectures.

The center has been in operation for 103 years in service to its local community and prides itself on creating a “community living room” where residents can learn and relax and where diversity is valued to enhance the neighborhood.

“These children are labeled as disadvantaged or poor but that’s not who they really are,” explained center Deputy Director Dorothy Scott who spent some of her childhood in Camden. “We’re working to make sure they can succeed by learning how to read well, have a safe place to make friends and learn socialization skills.

“We not only help children, we also have programs for teens, preschoolers, and parents and sometimes serve over 200 meals a day in our community kitchen,” she said.

Along with their counselors and other adult helpers, 34 children ages 5-10 arrived in Cape May for pizza, chips and dip, and ice cream which elicited screams of excitement.

They were equally enthusiastic about the new, donated colorful beach towels and toys each received to use during their short time on the sand and for the few daring to enter the water since most of the children cannot swim.

“So many in the community gave so generously so this event could happen,” said Arlette Wright, mission coordinator of Cape May UMC. “Acme, Joe Canal’s for water, the women of the church for snack bags, Big Waves, local pizza shops and so many other businesses and individuals really came together for this event,” she said.

Wright took over the organization of the event from last year’s coordinator, Debbie Chapman.

“It’s really wonderful to be able to do this for the children. The city (Cape May) waived beach fees and even put on another lifeguard for the children. Last year we hosted 120 children who came in three buses. This year, because of the bus cost, only one bus with fewer children could come and we wanted to make this year as memorable as possible,” Wright continued.

Cape May UMC Pastor Jeanette Block summed up the event by noting, “We did not have to spend a penny to organize this day for the children given the generosity of the community. The United Methodist Church has a close relationship with the center and it’s been a blessing for us that we can help.”

This article originally appeared in The Cape May Herald