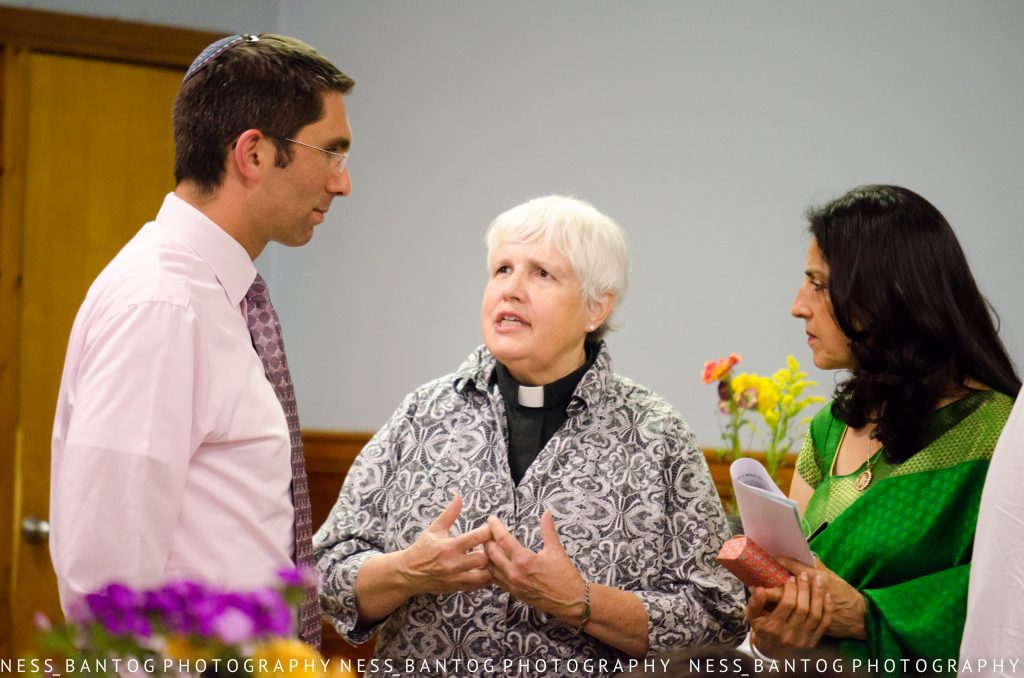 They might have come looking for comfort in the face of violence and discord, but that’s not what the 73 attendees from diverse communities in North Jersey and Rockland County, New York, received at the “Stop Violence and Promote Peace” event held June 29 at Calvary UMC in Dumont.

“If I had to sum up what was said and sung with far greater eloquence, the one word to shout would be “Enough!,’” said Rev. Elaine Wing, Calvary’s pastor. Six religious representatives joined Wing at the pulpit and more in the pews representing Christian, Muslim, Jewish and Hindu faith traditions.

The collective impatience reverberating in the room was fueled by data from many respected sites including the Centers for Disease Control and Prevention (CDC) and the Department of Justice which indicated that in 2010 alone, more than 30,000 people were killed by guns in the United States. Half of these victims were between 18 and 35 years, and one-third was under the age of 20.

Statistics from the CDC and The Los Angeles Times related to mass shootings were part of a powerful video created by Chuck Wing. Pictures of children who were all killed in the month of December 2015 – many as a result of domestic violence or drive-by shootings — were incorporated into the video leaving viewers shocked at the frequency of death due to firearms.

The focus of the evening was on firearm-related violence in the United States, yet those gathered in the church were of one mind as they joined Ercan Tozan, Executive Director of Peace Islands Institute-New Jersey, in condemning the heinous act of violence committed against innocent lives in Istanbul, Turkey.  Peace Islands Institute is an organization of Turkish-American Muslims dedicated to fostering tolerance, understanding, and peace among people across the world.

Particularly striking throughout the evening was that the voices calling for peace and non-violence had been doing so for decades.  Rabbi Paul Jacobson of Temple Avodat Shalom in River Edge shared these words penned in 1930 by Rabbi Mitchel Salem Fisher:

“Disturb us, (God), ruffle us from our complacency; Make us dissatisfied.  Dissatisfied with the peace of ignorance, the quietude which arises from a shunning of the horror, the defeat, the bitterness and the poverty, physical and spiritual, of humans…”

“This mindless menace of violence in America (again) stains our land and every one of our lives. The victims of the violence are black and white, rich and poor, young and old, famous and unknown.  They are, most important of all, human beings loved and needed. We tolerate a rising level of violence that ignores our common humanity and our claims to civilization alike.  We glorify killing on movie and television screens and call it entertainment.  We make it easy for men of all shades of sanity to acquire weapons and ammunition they desire.”

While there were moments of silence and deeply felt prayer calling for peace, tolerance, divine wisdom and healing, the thrust of the evening was a call to action.  The voices calling for change came from religious and secular songwriters as well as the speakers. One of the songs, “Change” was written by contemporary artist Christina Aguilera as a tribute to the victims of the Orlando shooting massacre in June.

The General Board of Church and Society for the denomination has resources on how congregations can take action. One way is to participate is “The Concert Across America To End Gun Violence” as part of the National Day of Remembrance for Murder Victims on September 25, 2016.  This is a national event that will use the power of music to fuel efforts to end violence due to firearms.

Music is one approach to facilitating change, but many social scientists studying non-violence, say a multi-disciplinary approach is required to change individual and collective behavior like gun violence.  Boston researcher David Hemenway says “We should regard gun violence as a public health threat and tackle it like we tackled the hazards of motor vehicles, cigarettes, and poisons.  All three products continue to circulate in society, but we have found ways to make them safer.”

As the June 29 service concluded, Wing invited the participants to engage in dialogue over refreshments and sign cards of encouragement to be sent to persons not always considered by the public but who are impacted by such tragedies such as funeral directors, first responders, and hospital staff.

An integral part of the event was the distribution of information to those in attendance.  “The resource materials are not exhaustive, but we believe they provide a solid starting place to learn about this complex and often divisive issue.  Let us honor those who’ve died and their families with our actions.  We are called as people of God to stop violence and promote peace.  Let us not refuse to answer that call,” Wing exclaimed.

To receive a copy of the handouts, or to be notified of future interfaith events regarding the reduction of violence due to firearms, please email the church at Calvary185@verizon.net or call 201 384 3630.