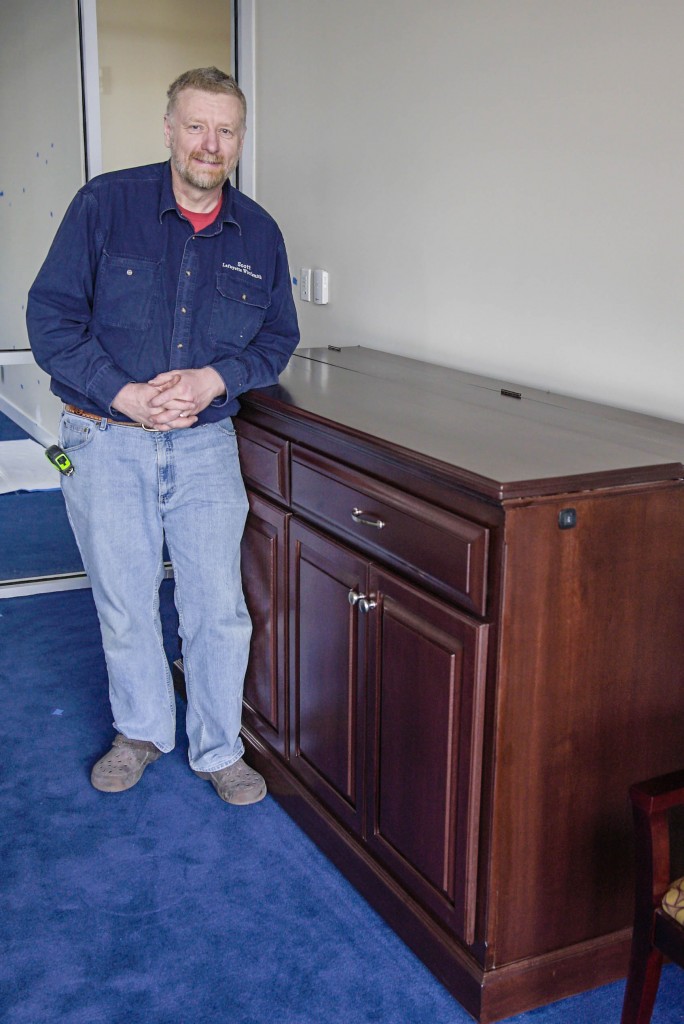 The spiritual symbolism of being both a carpenter and a man of God is not lost on Scott Maat, but he generally sees things much more simply.

This carpenter turned pastor started his trade when he was 16 because he wanted to be independent and saw that he had the gifts and talents to build things.  He has spent the last 35 years using those gifts and talents to become a master in the carpentry trade, crafting beautiful cabinets for homes and buildings.

“Carpentry gives me the ability to go into people’s homes and meet them,” said Maat. “You never forget the people.  I can hear someone’s dream and build it.”

Five years ago, he was studying Wesley in a small group at Branchville UMC.  He felt the call to ministry, but like many, he hid from it until he heard it again and again.

“One day, in the carpentry shop, God said ‘ENOUGH!’  I went home and told my wife that I’d been called to ministry and she said ‘I know already.   It’s about time. You’ve been driving me crazy.’”

That day started his journey to become a licensed local pastor and for the last five years, he has been appointed to Buttzville United Methodist Church in the Skylands District.   With his leadership, Buttzville has grown to 32 people in worship each week, with 11 children.

“Scott has worked in collaboration with the laity in Buttzville to help focus them spiritually on mission,” said Steve Bechtold, Superintendent for Skylands District.  He has co-led mission teams to Appalachia, West Virginia and the Jersey shore with A Future With Hope where his carpentry skills were a blessing.

He’s finishing up a new mission now.  Maat was selected to build the cabinetry in the conference rooms of the Mission and Resource Center (MRC).  The MRC has four main conference rooms including the Learning Center which can seat 250 and be divided into thirds.  Maat constructed credenzas for these rooms that can house television screen lifts and supplies for the meeting rooms.  He also created the wall unit in the media center on the first floor.  These are custom-designed, hand-crafted cabinets built with the highest quality.

Over the year’s Maat has helped District Superintendents Jisun Kwak and Bechtold with some of their cabinetry needs.  When the Trustees were looking for a cabinet maker for the Mission and Resource Center, they put his name forward.

“We needed a carpenter and God provided one of our own family members” said Bishop John Schol of Maat’s work. “Scott’s work is beautiful and we are truly blessed by his talents as a builder and as a pastor.”

Maat spent two months crafting the cabinetry.  He believes the cabinets will provide a sense of permanence to the new building and is grateful for the opportunity to work toward kingdom time instead of chronos time.

His future however is not in carpentry, said Maat.  “It’s what I do, it’s not who I am.”

“Being a carpenter has let me work from home.  I have had the time and flexibility to spend more time with my wife and family.  It’s a good life.  It’s been a real gift.”

Bechtold praised Scott’s commitment to ministry, “He is a great example to others who see themselves working full time but fulfilling their spiritual calling in ministry.”

Maat knows that there is both an end and a future in sight, “There’s going to come a day when my knees will give out and carpentry will no longer be an option.  Then I’ll turn my life over to full time ministry.  It is where I belong.”