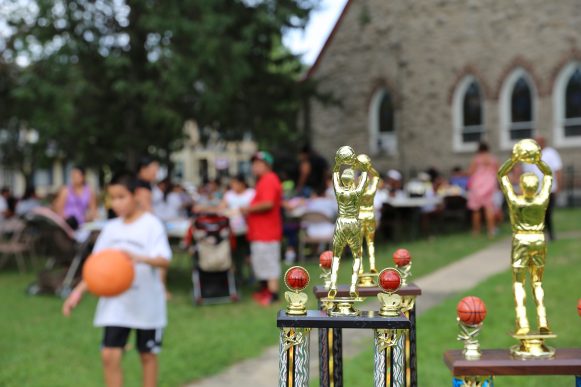 Trophies were awarded to children of the “Methodist Madness” basketball outreach at the program’s final picnic night on Aug. 10. Photo by Josh Kinney 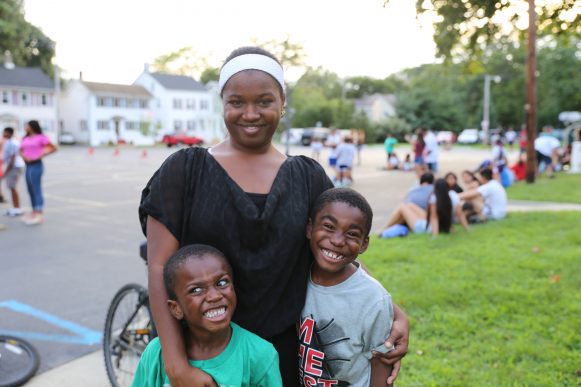 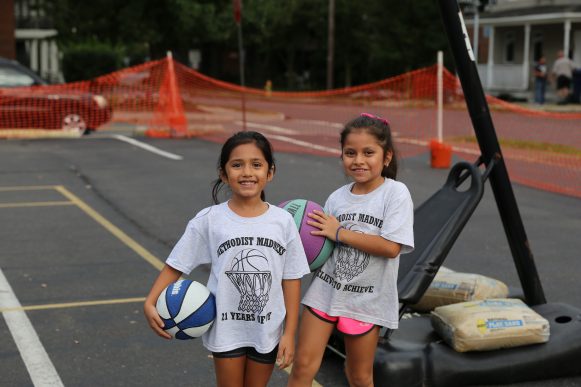 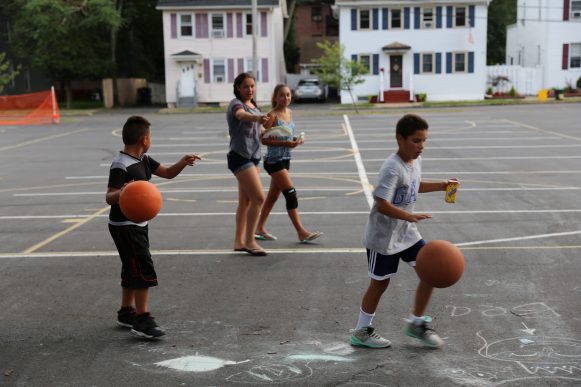 Children dribble basketballs across the Hightstown UMC parking lot which has become a place many in the community have learned to play the game. Photo by Josh Kinney

What began in the summer of 1995 with six kids dribbling a basketball in the Hightstown UMC parking lot has grown over the last 22 consecutive years to nearly 100 kids coming to the church each summer to shoot hoops. For children and adults of this small town in Mercer County, the summer evening basketball program plays a prominent role in the local community.

More than two decades ago, church members Jim Chamberlain and Paul Follansbee seized upon an opportunity to transform their church’s parking lot into a basketball court for neighborhood kids, specifically those living in a public housing complex across the street administered by Hightstown Housing Authority. With a lifelong love of basketball, Chamberlain found both the game and team concept rewarding and decided to team up with Follansbee to play out his vision, dubbed “Methodist Madness.”

Endorsed by then pastor Rev. James Davis, the baskets were donated by the United Methodist Men and Women and the program took off.  From scholarship awards, vision screenings, craft nights, and other activities accompanying basketball, the self-sustaining community-wide endeavor has instilled hope for multiple generations of Hightstown’s young people. One of those is Shalyn Randolph, who participated in the program as a kid and now cheers on her children as they shoot hoops from the sidelines of the same parking lot that taught her the game. Randolph went on to play basketball for Hightstown High School.

For five weeks every summer on Monday and Wednesday nights, about 14 adult volunteers from the church and community work with children to provide friendship, mentoring and games of basketball. A new contest is held each night earning winners trophies and mini basketballs to boost self-esteem. Regulars receive a “Methodist Madness” T-shirt. Themed nights feature guest appearances from community and church members who use their gifts and careers to benefit the ministry. From a dental hygienist giving away toothbrushes and paste to “library night” emphasizing the importance of reading, studying, and using the local library, the outreach has sought to meet a variety of needs.

“Everyone coming to the table with new ideas and concepts over the years has been a moving experience for me,” said Chamberlain. “Everyone takes ownership of their ideas and we’ve just been so blessed with people in different fields with different gifts who see a need and bring it to the program and work to make it happen.”

For 20 years Chamberlain ran the program with the help and support of committed, likeminded church members who have shared the vision of keeping the dream alive. Two years ago, Chamberlain turned over leadership of the program to Steve Lee, Ted Koerner and Bill Fish.

“One of our church members noticed some of the kids didn’t have proper shoes,” said Lee. “So a shoe donation program began.” Knowing several children participated in a food program through their schools which did not extend into the summer months, the idea of providing nutrition bags was implemented several years ago.

“Picnic night was another concept to bring the families out and provide dinner and an awards ceremony,” said Lee, who has coined this year’s program slogan “Believe to Achieve.” Suggestions for each year’s slogan such as “Court of Dreams” have come from many different members of the Methodist Madness team over the years.

Fundraising for “Methodist Madness” has always been separate and exclusive from the church “with no impact on the church budget” said Chamberlain. More than 80 percent of the program’s cost is met by the church’s annual flea market which is held on the town’s yard sale day. Months before the flea, flyers are posted throughout the town soliciting used furniture and other household donations which are collected and stored in the church basement and made available for purchase on yard sale day.

“It’s gotten a whole lot more efficient over the years, but it’s a heck of a lot of work over the course of the year to pull it off,” said Lee. “By spring, it’s an all hands on deck situation, but it’s always worth it, and it’s been incredibly rewarding.”

Realizing the importance of the summer program, the Hightstown Housing Authority voted the outreach a $1,000 annual grant. In 2005, a scholarship program with an anonymous gift of $10,000 opened doors of opportunity to several program participants. Chris de LaHoz attended Mercer Community College and completed a degree at Rider University in Trenton with scholarship aid.

During the 2016 Methodist Madness season, Lee reported a total of 171 youths attending at least one night’s activities and averaging 100 each week with 73 new participants. This year 100 T-shirts and 100 pairs of sneakers were given out. Chamberlain commended the church’s various pastors who have contributed to the program’s success by use of their own unique gifts and ideas. Hightstown UMC pastor, Rev. Sammy Arroyo beamed, “This has been a tremendous summer. We are so blessed.” Arroyo opened up his garage to store an overflow of used furniture for the church’s flea market and transformed his backyard into “BBQ Alley” for the program’s family picnic and awards ceremony night.

From the volunteers, guest speakers, and administrative supporters to the bathroom attendant, “All are involved and engaged in some sort of ministry for the program,” stated Arroyo.

“Over the years, it’s not just the kids growing and maturing,” said Lee, “but the parents and caretakers are enjoying the program and taking on bigger roles. We’re building relationships.”