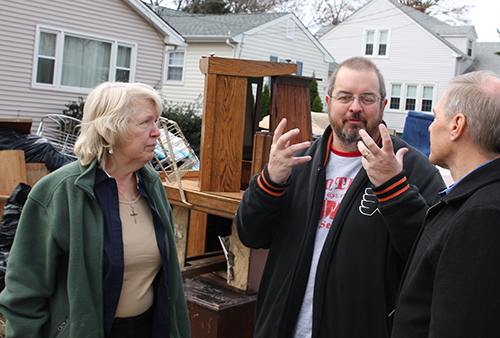 The fact that UMCOR was born in New Jersey leaves it as no surprise that the relief organization has remembered its birth state in times of need. It was in 1940 that the beginning of UMCOR came about through an act of the first General Conference in Atlantic City.

Since then, UMCOR has been on the forefront of providing relief services and recovery options to those who have faced tornados, famine, hurricanes, earthquakes, terrorist acts and other disasters around the world and in Greater New Jersey.

UMCOR will celebrate its 75th anniversary with a special service at Asbury UMC in Atlantic City at 10 a.m. Sunday, March 15. Part of that special service will include Bishop John Schol presenting a check with GNJ’s contribution from One Great Hour of Sharing to UMCOR in appreciation for what the organization has done to help with disasters in the conference and around the world.

Two disasters that have had a long-lasting effect on conference residents were the terrorist attacks on
Sept. 11, 2001 and Superstorm Sandy on Oct. 29, 2012. In both cases, UMCOR was at the center of helping those active in the Greater New Jersey Conference provide relief to those in need.

After Superstorm Sandy, UMCOR was a key resource for helping the conference start A Future With Hope to help those whose homes were damaged rebuild and return home. After 9/11, UMCOR provided $4.5 million in funding for the Healing, Encouragement and Advocacy in Response to Tragedy (HEART) unit that lasted from July of 2002 until June of 2006.

Rev. Chris Miller, who led the HEART unit for three years, said the type of recovery that was needed wasn’t exactly what he and others thought it would be when they started, making UMCOR’s financial flexibility key to the success of HEART. By the project’s end in 2006, HEART had handled 522 cases.

After 9/11 thousands lost their jobs and many of those same people lost loved ones in the attacks. And others who lived through the events of that day in New York were traumatized.

“We developed case management around a couple of things,” Miller said. “First, we had to get people to understand how to spend their money wisely, and then we had to help them arrange their priorities to obtain a job or income.”

Miller said there was a wide income range when it came to those needing financial aid.
“People who lost their jobs were figuring they were going to get another job within a few weeks,” he said. “So they spent all of their savings, their 401K money, their kids’ college funds, maxed out the credit cards and went into debt before asking for help.”

The ripple effect was felt from stock brokers and office workers to restaurant servers and limousine and taxi drivers.

“Our understanding of recovery was people becoming self-sufficient again,” Miller said. “That included everything from how to just pay the bills each month to helping people find new jobs by connecting them to head hunters.
“People had to learn that recovery was not about getting back to where they had been, but it was their income matching their financial outcome.”

Miller said other faith-based aid organizations referred people to HEART for help, which included the Jewish Family Services, Catholic Charities, the Salvation Army and an Islamic outreach group.
When the number of cases began to dwindle in 2005 Miller took on a full-time pastor’s role in Delran and GNJ’s Ken Sloane came in to lead HEART in its final year. Sloane, now with the General Board of Discipleship, wrote and submitted the original grant to UMCOR to create HEART.

“The stories were heartbreaking,” Sloane said. “People had lost so much and were just emotionally devastated, but they couldn’t bring themselves to go back to New York.”

Sloane said near the end, when most other recovery groups left, the United Methodists remained to help those still in need. In fact the HEART program was the longest running recovery program for 9/11 in New Jersey.
“UMCOR is not always first on the scene,” Sloane said, “but they are always the last to leave.” UMCOR is proving its resilience once again with its support of A Future With Hope, a mission arm of Greater New Jersey created to rebuild Sandy-damaged homes in New Jersey. UMCOR has granted A Future With Hope more than $4 million for relief and recovery helping the organization become recognized as one of the top five social services agencies in recovery in New Jersey.

“They are one of the reasons we have the longevity that we have,” A Future With Hope Executive Director Bobbie Ridgely said of UMCOR. “UMCOR understands the complexity that is involved with a disaster like this.”
According to a recent survey by the Fair Share Housing Center, approximately 15,000 people are still out of their homes or living in damaged homes because of Superstorm Sandy. UMCOR’s support of A Future With Hope and its financial longevity has ensured that A Future With Hope will be helping people for years to come. A Future With Hope has rebuilt 134 homes with more than 9,000 volunteers. It has a goal of rebuilding 300-500 homes through 2018. “UMCOR has such a good reputation in disaster relief and coordination, it helped us as we got started,” Ridgely said. “And all of our national partners know we are UMCOR in New Jersey.”

Sandy wasn’t the first storm relief effort in GNJ supported by UMCOR. It was also on hand when Hurricane Floyd hit the East Coast in 1999, causing significant flooding in Bound Brook, Manville and Lodi in New Jersey, and Spring Valley, in New York, which is also part of the GNJUMC.No matter what or where the disaster is, Miller said part of the result of UMCOR’s generosity is that things learned on a larger scale can also work in a local church setting.

“The fulfillment of doing the work was extremely high for me,” he said. “We’ve used similar strategies to help people here in my church, so it also shaped my future ministry.” And it’s likely that UMCOR will continue to respond to dire needs in Greater New Jersey and around world to give people hopeful futures for decades to come.