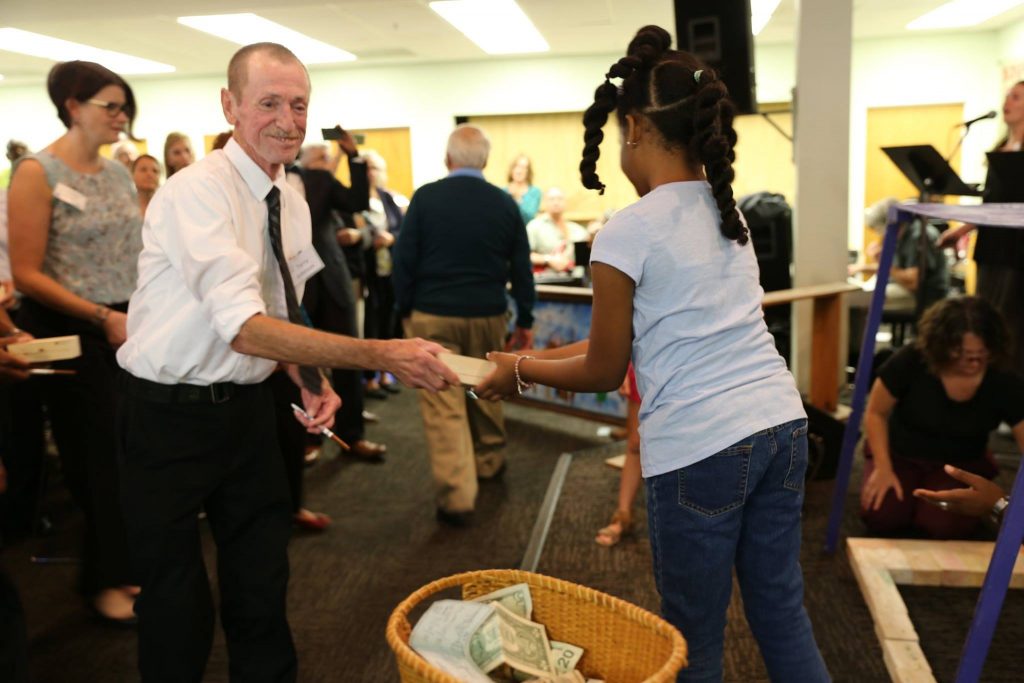 Rise up and Build’ was the theme of the 2017 ‘All People Conference’ in Columbus, OH. Participants were given wood blocks to write their hopes, dreams, and ministry ideas to present at the altar. Photo by Josh Kinney

COLUMBUS, OH – Building relationships can lead to building entire neighborhoods, at least that’s what 36 laity and clergy from Greater New Jersey discovered when they stepped off a bus onto Parsons Avenue in the south side of Columbus, Ohio on October 21. Once blighted and in disarray, dozens of new and reconstructed homes stretched for blocks in the gleaming shadow of the city’s Nationwide Children’s Hospital; a vital partner of The United Methodist Church of All People and their nonprofit organization which has helped transform an entire community.

Several years ago, Bishop John Schol was invited to speak at the church’s annual ‘All People Conference’ and agreed under one condition: that he would be able to bring others with him to dream, envision, and learn in the hopes of leaving inspired and equipped to go forth and live out what it means to truly be a church for all people.

For Rev. John Edgar and the All People Church, it started with acknowledging what had been freely given them as followers of Christ; God’s abundant grace.

In January 1999, the church opened a “Free Store” on Parsons Avenue, a street known as a dividing line between a gentrified community and poverty-stricken neighborhood. Donations were collected to populate the store so area residents could pick up clothes, shoes, books, furniture, and household items free of charge. Those supplying the offerings were challenged to “follow their donations” by volunteering at the store to build relationships with people in the community. What resulted was poor and middle-class people coming together while the store “sold love” to the area and built friendships that would have never existed otherwise.

“The Free Store allowed people to touch grace,” said Edgar, recognizing how the relationships expanded to launch a highly diverse church in 2002 and form the ‘Church and Community Development for All People’ (CCDAP) nonprofit organization. CCDAP grew to open a produce market, bike shop, after-school programs, a summer school, mentoring services, senior transportation, music and arts education, and health and wellness initiatives. With the help of a vital partnership with the community’s Nationwide Children’s Hospital, an affordable housing strategy was birthed and began renewing south Columbus.

“The relationships began building the front porch of the Kingdom of God,” said Edgar. “With the Free Store, people simply gave out of abundance, and it began to multiply.”

“No one said church is supposed to be comfortable,” said Hansen, pointing out that the diverse church on Parsons Avenue was packed with people from all different races, stories, walks of life, backgrounds, tastes, preferences and economic situations. “If everyone is always comfortable at their church, that’s not integration, that’s assimilation. We have to ask ourselves what we are willing to sacrifice as our sacrifice of praise.”

For Hansen, the institutional church seemed to send a message of ‘do whatever it takes to grow the church’ as opposed to being and living the body of Christ. At the Church of All People, she was inspired by the latter.

“God can’t be constrained within a church building. And everyone who walks through these doors is poor,” she exclaimed from the pulpit, speaking about the condition of the soul. “Some of us are just so poor that all we have is money.”

Hansen joined the church because she saw it “doing what the church was meant to do.” She purposely chose a life the world considered “downward mobility” for “the sake of her soul” and in doing so learned what it meant to “truly love Jesus.”

“Some people come in here with nothing and give like the widow’s mite,” she said. For the Church of All People, that mite has gone on to produce community enriching programs and initiatives and over $60 million in affordable housing through their asset-based community development nonprofit.

“Take what you have, no matter how meager it seems to you, and God will use it,” said Edgar. He encouraged the conference attendees to consider their assets and to build from resources, hopes, dreams and partnerships.

“The bookends of Bible (Genesis and Revelation) tell us that God created the world in abundance and will restore it to abundance again, and that when we share our resources with each other, we trigger that divine economy of abundance,” said Rev. Michael Reed of Pearson Memorial UMC in Hamilton, affirming Edgar’s testimonial. “We are finding this with our church’s food pantry: that the more we seem to give away, the more seems to come back in through donations and a spirit of generosity.”

‘Rise up and Build’ was the theme of the conference which was exemplified on a Sunday morning session where participants were given wood blocks and a marker. On the top of the block they wrote a dream, idea or ministry, and on each side the names of people who could help achieve the mission. During the worship service, church members and conference attendees made their way to the altar to place their blocks and pray over their hopes.

“When you don’t know what to do, pray to see how to assemble it and preach about what you’re praying about,” said Edgar. “Bring assets together. Every vacant house is an asset, not a liability.”

The Church and Community Development for All People recognized that their city’s Nationwide Children’s Hospital was anchored in their community and therefore had an interest in their neighborhood. Knowing that the hospital was mission-minded with a desire to build a good image and reputation, the All People team sought out the hospital’s goals in order to form a vital partnership and simultaneously achieve their objective to live out the church by serving others.

“It’s important to understand your partners’ aspirations and help them achieve their goals, too,” said Edgar.

“This space is close to our partner, the hospital, who needs to hire people and is committed to hiring from this very place,” she beamed with outstretched arms. “We’re coupling affordable housing and workforce development to get folks into a livable wage.”

Rev. Hector Burgos, Director of Connectional Ministries, turned toward her and smiled.

The next day, as Greater New Jersey laity and clergy clamored together on a street corner inhabited by new affordable housing units, Edgar explained the challenges of accomplishment.

“We don’t want to become victims of our own success,” he said.  Despite the determination to rid the neighborhood of blight in exchange for an attractive, inclusive community, the All People team feared displacing people and the looming threat of gentrification.

“We’re working on a strategy for housing that everyone who lives here can still afford to do so in ten years,” said Hansen.

For the All People team, that means a plan to rehab and own 15% of the housing in Columbus’ south side to “create a plateau” rather than a “tipping point.” Presently, their strategy has the support of the city’s mayor, local banks and the hospital, which as a vital partner, has become not just a granter of funds, but a leader in what’s become a shared initiative.

“It’s a reputable model,” said Edgar. “This is our chance to preserve this inclusivity.”

Bishop Schol addressed the conference, sharing his community development experience, wisdom and recommendations. He encouraged the formation of community associations and an “all in this together” mentality.

“We should get rid of the word client and begin to think of people as friends, coworkers, neighbors,” he said, suggesting the group flip their perspective from a ‘needs-based’ to ‘challenge-based’ thinking.

“It’s the mission that is our capital,” he continued. “Is this going to move innovative ideas forward and grow a vital congregation and build the community? These are the questions we need to ask.”

Rev. Brandon Cho of Morristown UMC was encouraged by the Church of All People’s three basic principles: Build relationships, build the body of Christ and build the ‘Front Porch of the Kingdom of God.’

“I was most inspired by the joy of serving others by Pastor Edgar, the leadership team and every member of the church,” said Cho. “It was their love in action that is making a real difference in people’s lives.”

Cho said he was moved by the church’s “brilliant” way of bringing rich and poor together to develop and multiply its mission. His wife, Rev. Jennifer Cho of Bridgewater UMC agreed.

“Community transformation work can start in a small way as the Church of All People did with their Free Store,” she said.

Rev. Shelley Smith of Ferry Avenue UMC in Camden concurred with Cho’s ‘starting small’ sentiment. She, along with her lay leader, Michael Brown, left the conference with newfound motivation.

“As one starts small and builds ministries out of opportunities that emerge, partnerships can grow,” she said. Smith was mesmerized by the people of the church.

“They don’t practice radical hospitality,” she said. “They are radical hospitality. Their unapologetic acceptance of everyone is consistent. All were not just welcome to come but were actively involved and participated in the mission in their own way.”

Schol told the conference that there was a difference between programs and strategies.

“Strategies link programs to programs. Programs have beginnings and ends. Here we see the Free Store was the start, and it was linked to the next thing and the next thing after that,” he said. “That’s what strategic thinking is all about.”

He concluded by challenging the conference to think like leaders by seeing everyone else as a leader.

“Give the work back to them,” he said. “Keep things moving forward and keep casting vision and putting it out there.”

He shared what he considered important enthusiasm for ‘what’s next.’

“Leaders don’t dwell on what they’ve already done,” he said. “They dwell on what’s next. We have to fail a whole lot more. That’s the only way we’ll continue to see things happen; if we’re not afraid to fail.”

After Schol finished speaking, Rev. Dennis Paschke of Orting UMC in Washington leaned back in his chair, stroking his chin.

“This conference is giving us permission to do what we should have been doing all along,” he said. “To be who we say we want to be as followers of Christ.”

Director of Mission Nicole Caldwell-Gross weighed in. “Community transformation is hard work,” she said. “Yet, we don’t do this alone! In addition to the capable and called leaders within each of our communities and congregations, there are staff leaders in GNJ committed to walking alongside our laity and clergy in this work.”

GNJ Hope Center Developer Andrea Wren-Hardin expressed earnest gratitude for the experience of the trip and the conference.

“We have to be in relationship with people,” she said, admitting that discipleship begins with relationships. “We can’t continue to see ourselves as separate or different from others. We’re all gifted in ways and lacking in other ways, yet all children of God. By connecting with others, knowing them, we can all build ministry together. Not ‘us for others’ but ‘we for one another.’”

“It was so amazing,” said Wren-Hardin. “It didn’t matter where we were from, what we had done, what our lives were like – in that moment we could celebrate that we were alive and together – the walls separating us dropped. That is what I imagine the Kingdom of God to be.”