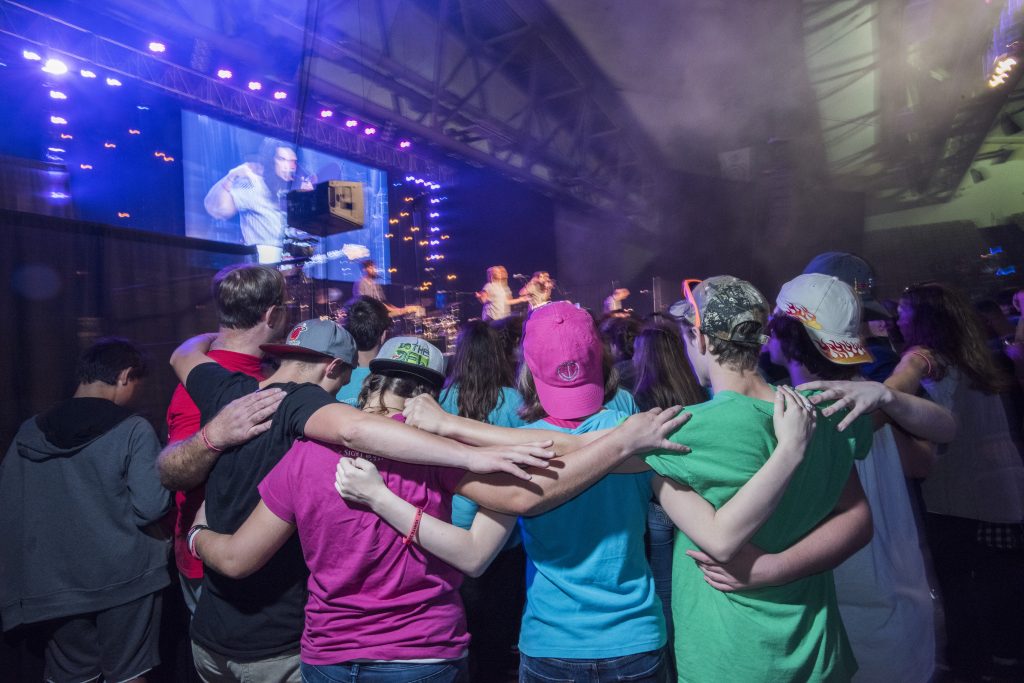 When the doors to the Wildwoods Convention Center open on October 1, a sense of hope for the future will likely rush out as Next Generation Ministries hosts IGNITE 2021: A Great Multitude. A year filled with disappointments, restrictions and solitude will quickly be eclipsed by sounds of laughter, new opportunities to heal and grow, reconnecting with friends and lots of fun!

“We’re so excited to bring back IGNITE this year with an awesome lineup of great performers and inspiring speakers,” said Director of Connectional Ministries Eric Drew. “IGNITE is going to be exactly what they need after such a rough year.”

Amid all the revelry and spiritual vitality will also be safety precautions to ensure that no one needs to worry about safety while they are there.

A Vow to Serve God Through Song and Positivity

Joining the brigade of performers this year will be an IGNITE veteran at the age of only 32.

He had been at IGNITE in 2017 and 2018. Bryan Martinez, who calls himself El Vow because he has made a vow to serve the Lord, is committed to building a bridge between pop culture and church culture with his music.

Martinez still remembers his first time at IGNITE, walking into the green room to find a man cleaning up. He would later find out that the man was Bishop Schol.

“You don’t always see that humility. It was great to see the leader cleaning,” said Martinez who added how grateful he is to be part of the IGNITE culture.

Like most performers, Martinez’ career went from 100 to zero overnight when the pandemic paralyzed his community and communities worldwide.

“It was really difficult. I want to bring a fresh breath of positivity and unity,” said Martinez who lives with his wife and three children in Dallas. “I want to show young people that you can serve God with your gifts.”

For Martinez, the son of two Mexican immigrants, being positive was not always easy.

“Growing up there was never a Bible in the house. My brother, who became a believer, dragged me to church one day when I was nine. By the time I was 12 or 13, it clicked for me. I said, God, I hear you.”

But at age 14, his father was arrested and never returned home. Martinez found himself living in Los Angeles a year later and then on his own at age 17.

But in spite of the enormous adversity he has faced in his life, Martinez has always kept moving forward and has always had hope.

He added, “I haven’t figured it all out, but I believe God is holy and that he can take brokenness and use it, connect with people. Everyone has something they’re dealing with, such as identity. My identity is in Christ. That’s what keeps me grounded.”

Sometimes known as the Lone Star Latino or the Texas Chico, Martinez has brought his whole self to the stage for more than a decade, entertaining crowds with his unique compilations of music, snippets of familiar songs in ways they’ve never heard before and moving the music in the direction of the energy, an art that can only be done live.

When he’s not mixing, mashing and revving up a crowd, he’s writing music and dabbling in writing restaurant reviews as Bryan. But no matter what he’s doing, he is working on establishing roots and connections.

“If all you do is live for the hype, you die with it.”

There’s no doubt Martinez will bring his all to IGNITE, which includes his deep love for his wife, Esmerelda, and children, Layla, Xavier and Luna, and of course, God.
More details can be found at https://elvow.com/home.

Leaning into God this October

Also no stranger to IGNITE is Mike Mage who is the worship director for Bay Hope Worship, a Tampa-based organization that collectively connects people to a life-changing relationship with Jesus Christ through music. In 2016 he was there in Wildwood as part of the band, Bellarive.

“God is really speaking to me a lot lately, and I’m realizing that through it all, there’s no amount of fear that can separate us from God,” said Mage who sings and plays the guitar for the group of about 25-30 people who support the group’s mission, whether that means writing, producing or leading. For each event, several people from this larger group are chosen to represent Bay Hope.

Mage went on to say how amazed he has been by the resilience of young people in the face of such adversity. He’s hoping Bay Hope Worship can be the catharsis they need.

“No amount of social unrest can change how much God loves us. We need to lean into that. The kids need that.”

Among those helping him to share his message this October will be his sister, Melissa Meiner, also a vocalist. Along with their brother, Andy, who is an online pastor for the group, Mike and Melissa grew up listening to music. In fact, their parents met in a band. Their mom, who died in 2017, was an accomplished Jazz pianist, and their father played the bass.

“It’s a part of who we are. It’s in our bones,” said Mage. “It’s an incredible gift to be able to have this, and I want as many people as possible to experience what I have.”

But in December 2014, as he walked into day one of his job at Starbuck’s after moving back to Tampa from Atlanta with his wife, Kristen and newborn son, Caleb, Mage wasn’t so sure that his future would be in music. He wasn’t sure until a call came in at the end of his shift from someone at Bay Hope Worship asking if he would consider filling the music director vacancy at the organization.

As they say, the rest is history, which now includes two more children, Ella and Lukas, the latter born in 2017 whose name means “bringer of light and peace to the town.”

“This is my passion. This is where I’m supposed to be,” said Mage, who hasn’t looked back since that day in 2014.

From “There’s Only One” and “Can’t Separate Us” to “Freedom Song,” Mage and the rest of the team are spreading hope in every song they share, knowing that God will “overcome the brokenness with love.”

Find out more about IGNITE 2021 and register your youth! Click here