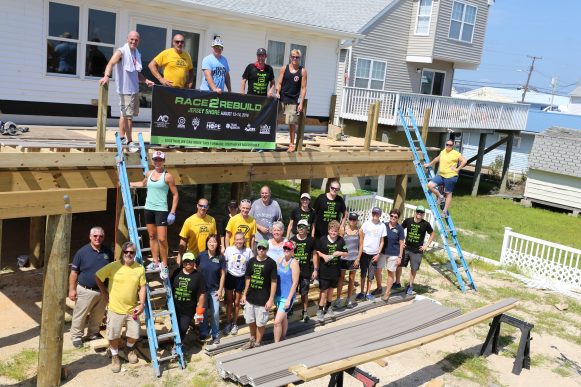 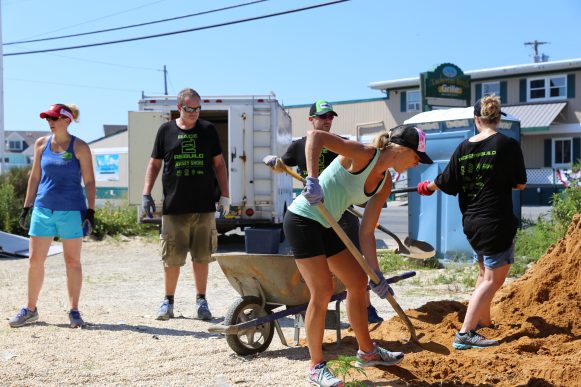 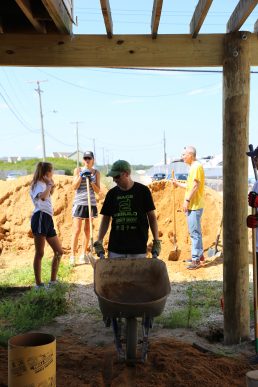 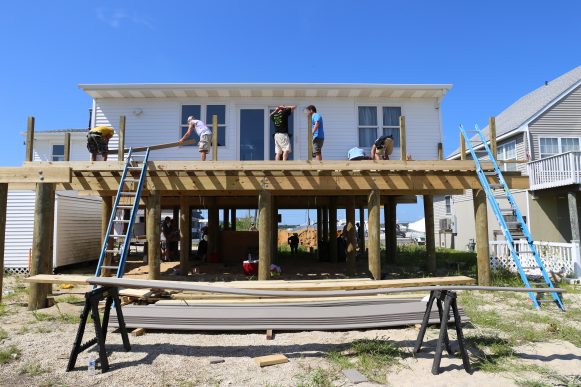 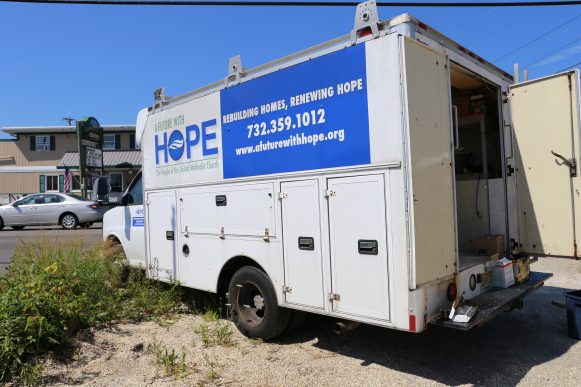 The buzz of power tools reverberated off fresh planks beneath Nan Unley’s Tuckerton home. Voices shouted directions over clinking nails and grinding drills as volunteers from A Future With Hope and Race2Rebuild worked together through the sweltering heat of Saturday, August 13.

“Four years later and we’re still here,” Unley said, wiping sweat from her brow and resting against a new piling holding up her house. In 2012, Superstorm Sandy left Tuckerton devastated, and the work continues.

“My boss took a ride here two weeks ago and said, ‘Nan, I can’t believe it. So many homes still not fixed!’” Unley said. But now that has changed, at least for Unley, who in February garnered support from A Future With Hope. As the mission arm of GNJ, the organization remains one of the last standing in the field throughout New Jersey helping rebuild and restore neglected homes and lives still reeling in Sandy’s wake. This summer, the organization partnered with Race2Rebuild, a nonprofit endurance sports program supporting disaster recovery by participation in rebuilding projects. Also founded in Sandy’s aftermath, Race2Rebuild’s national team of volunteer athletes partner with various racing events to raise funds and build awareness for families and individuals with lost or damaged homes.

This year, DelMoSports, Atlantic City Sports Commission and Race2Rebuild partnered for a Jersey Shore Hurricane Sandy rebuilding project with A Future With Hope and the St. Bernard Project (SBP) before the Atlantic City Triathlon and 5k on August 14. Volunteers of all skill levels assisted multiple projects in Monmouth and Ocean Counties to continue the recovery efforts from Hurricane Sandy often ignored in the media.

“A community’s recovery process following a disaster is the ultimate endurance event,” said Race2Rebuild President Sarah Hartmann. “We are truly grateful to our partners the Atlantic City Sport Commission and DelMoSports, and especially our rebuilding partners SBP and A Future With Hope for their ongoing work and for providing Race2Rebuild volunteers with the opportunity to tangibly change lives, sending a message to all families struggling to come home that they are not forgotten.”

Unley had felt forgotten for several years, having lived in eight different places including an RV and on family member’s couches.

In 2002, Unley bought her home in Tuckerton and moved from Cinnaminson out of a love for the Jersey Shore. Friends and family told her she would never be able to afford the venture but with perseverance and determination she worked hard to make it happen. Later that year, she lost her son to a seizure. His two young daughters “lived for coming to Nannies to crab and fish.” Unley’s son asked his mother never to move because of how much he and the family loved the Tuckerton home. Unley has held on to those words.

“So every time I was feeling like I hit rock bottom, I would remember what he said, and fight on,” she stated.

“Four years after Sandy, the recovery effort has become complex for many homeowners,” said Bobbie Ridgely, Executive Director of A Future With Hope. “People are struggling with government resources, fraudulent contractors and delayed insurance payouts. Their options are narrowing. A Future With Hope and United Methodists are committed to being a place where they can turn for help. Working with organizations like Race2Rebuild allows us to spread renewed awareness of the ongoing plight of Sandy survivors, and to bring home those families who are still rebuilding.”

In 2014, Unley was laid off from a nursing job at a pediatric medical daycare in Atlantic City but was fortunate enough to quickly find work at another medical daycare. She described the panicked experience of job hunting without a place to call home as stress-filled and taxing.

Four years after Sandy, much work remains, and people like Unley are still displaced. “I think we should fly banners down the beaches where there are thousands of people every day and get the real numbers out there of the people still homeless,” Unley said. She added, “Word of mouth helps, too. I talk to people who have no idea what is still going on.”

“I have met so many helpful and wonderful people,” Unley said. “Thank you ‘A Future With Hope’ and all the volunteers. I never realized how important you are, and I will forever be grateful!”