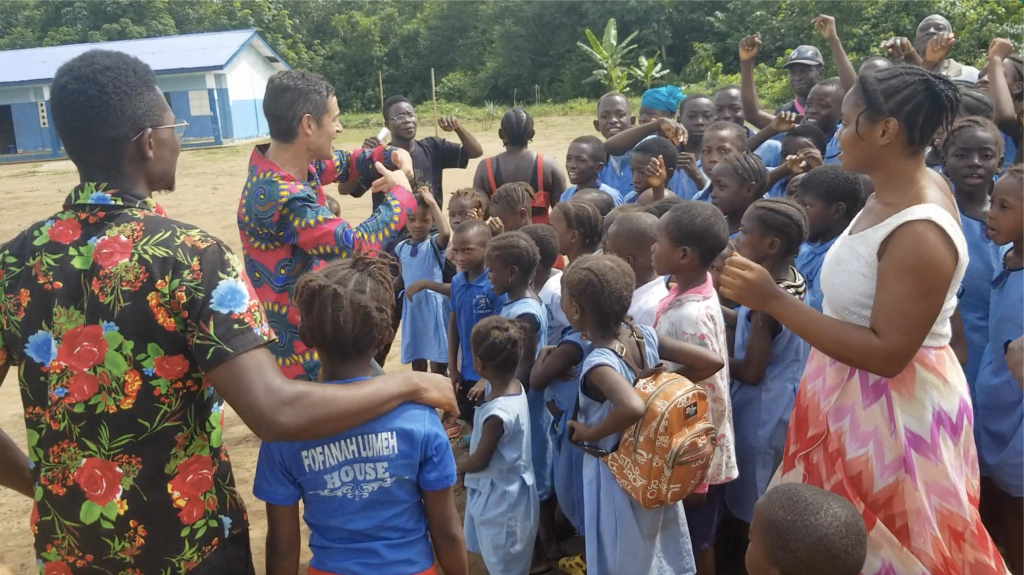 In an isolated village of the Sierra Leonean city of Bo sits a blue school, ramshackle buildings, huts with thatched roofs and remnants of a decade-long war. Plagued by the historical trauma and layers of poor healthcare, it is estimated that 185 out of every 1,000 children will not live to see their fifth birthday. The Human Development Index lists Sierra Leone, a nation on the coast of West Africa, as one of the poorest countries in the world. It is estimated that there is one doctor for every 25,000 people.

But in that small village where most are cut off from most communication, there is also a rich culture of storytelling, Mende dancing and a “football” game or two.

There are also many students eager to learn and grow and a group of faithful employees dedicated to help make that happen. Down the road is a new solar-powered medical center where prenatal care is emphasized. In the city, there is a burgeoning restaurant, slated to open in December, where some of these graduating students may work one day.

In Highland Park, NJ, Trinity UMC member, Alan Chorun and his team have been spending the past decade sharing God’s love in Bo through medical care, education and a focus on creating a self-sufficient community through Young Vision Africa (YVA).

A professor at Rutgers and Union County College, Chorun has also led mission/service work in homeless communities in Manhattan, the Cheyenne River reservation, Appalachia and New Jersey. But after reading A Long Way Gone: Memoirs of a Boy Soldier by Ishmael Beah who at 13 became a solider in the government army, he knew he needed to get to Sierra Leone. His solo trip to the country in 2009 sparked his passion further.

“The work Alan does is the epitome of sacrificial love. It’s astounding when you think of all of the time, effort and resources he pours into YVA,” said Rev. Alicia Grey, a former missionary who was appointed to the church this past July and who has since immersed herself into the church’s culture and mission. “He has given up a lot over the years because he is so driven by this deep love of God and people. He is truly an inspiration for all of us.”

Chorun began his service in this war-torn country burdened under colonial rule for many years by volunteering at an orphanage where some of the children had survived in the bush for a long time amid a civil war in the country from 1991-2002 before being brought to the orphanage.

While illicit diamond traders gained wealth from Sierra Leone’s mines, most citizens remained in dire poverty with no infrastructure or healthcare. Even before the war in the mid-1980s, around 80 percent of the population lived below $1 (USD) per day. During the war, an estimated two million Sierra Leoneans—almost half the population at the time—were displaced and an estimated half million were killed. Rape, torture and abductions were rampant. The crippling conflict fueled diseases and illnesses like pneumonia, typhoid and malaria, destroyed the economy, dwindled food supplies and demolished national infrastructures. Some civilians’ hands were amputated to discourage them from voting in upcoming elections.

But the people of Sierra Leone still had hope and an unwavering courage to recover and improve their lives. The United Methodist Church had founded the orphanage to protect some of the children during the war.

“I ended up there unplanned, and while there I met orphan youth who had vision and hope waiting to be actualized,” said Chorun.

“Seeking to empower one of the orphan youths with an ambitious dream, some friends and I funded and organized the construction of homes for widows in his remote village,” said Chorun, who added that they started to run a Vacation Bible School for the illiterate children of the village.

“We all saw that these kids were missing an opportunity, a good education. So YVA was born by starting with the education of five village children.”

The new group built houses over a two-year period. They started tutoring children in a makeshift school with only a roof, no walls and a chalkboard in each corner.

Since then, YVA has continued to be all about the vision of young Africans. In a country where colonialism strangled their freedoms for many years and stifled growth, YVA’s mission remains to help these youth help themselves.

The result has been magical.

A high school student is teaching little “street” children to read. A young middle-schooler suffering from a serious condition conducts classes on his porch for children in the village—after he walks four miles home from his school. The students are courageous, intelligent and insightful. Their stories are inspiring and heartwarming.

Since its founding in 2009, Ebola was eradicated in the country in 2012 through vigilant grassroots efforts to educate; the original makeshift school has grown to now educate an average of 80 children at a time with some of its alumni returning to be leaders; housing for teachers and other families has been built; wells have been fixed and there is a healthcare center.

“But through it all, we have come to focus on empowering youth through education and God’s hope and compassion,” said Chorun.

He added that the original scholarship program with the five children has developed into a comprehensive leadership and character development mission using the village church community and weekly American mentor sessions.

Hoping to spread and share their work, Chorun and his team brought groups of six Americans in 2016 and another seven in 2017, holding medical clinics and school programs for the arts and English literacy.

“At the request of the Muslim villagers, we started a church and in an amazingly courageous commitment, our board member Rev. Enid Benjamin spent five months in the village to encourage the church and the school,” said Chorun.

“Always though, we’ve been led and inspired by youth…their judgment, their vision, their ideas. Many of the orphans I met years ago have worked for us. What YVA’s Tato Primary School lacks in facilities, it makes up for by the talent and commitment of the staff our head teachers assembled.”

Twelve years since its founding, YVA is still working toward improving education, now with a focus on women and girls amid a patriarchal culture that doesn’t always put value on the contributions of women.

Chorun added that Princess, a local who was once a preschool teacher, is now a YVA director. “She has quite a story,” said Chorun, recalling how a young woman once married to a man with five wives is now working toward getting her certification as a teacher.

“She said we changed her life, but she is now changing the lives of many,” said Chorun.

He also noted that the education is not just about academics. It is also about child abuse prevention and empowering girls. One way they do that is through fables from which they teach simple character development. Also emphasized is the importance for students to give back to their community in ways like tutoring younger children.

“We have been putting more attention on kids that will hopefully become leaders in their country…We’re also hoping to bring people there this summer, people who are brave, sensitive and altruistic.”

Rev. Anna Thomas, who was the church’s pastor when YVA was founded and now at Metuchen UMC, was an integral part of bringing the mission to fruition. She called Chorun “a deeply committed Christian.”

She added that his project is also supported by Centenary UMC, Aldersgate UMC and Beverly UMC, who have all participated in raising funds for this project.

“He strongly believes to encourage the people there to trust themselves and explore resources that are readily available to them in Africa and build on them–and not be continuously dependent on the western influence. He has created a team of people here to guide the educational process in Sierra Leone.”

Chorun’s connection to Trinity UMC began in the early-1990s and has since taken on many different roles like SPRC chair and music director.

As he looks ahead at the future of YVA, Chorun said his goal is to be flexible and focus on meeting needs of some of the poorest people in the world.

“Now we just have to do the hard work of looking outward instead of the church acting for itself. It’s about reaching out in many ways,” said Chorun.

In a country that has been plagued by abject poverty, corruption and abuse for decades, Chorun and the YVA team he leads are ready to take on any challenge they meet with grace, courage and a bold determination to transform the small pocket of the world by not only providing them with resources but equipping them with the tools, resources and confidence to build on the foundation and strive to be independent.

For a country whose name means “lion mountains,” whose capital and largest city is called Freetown and with natives like Zainab Hawa Bangura who is now Director-General of the United Nations Office at Nairobi and committed to erasing the rape culture that has existed for years, the future looks bright and full of promise.