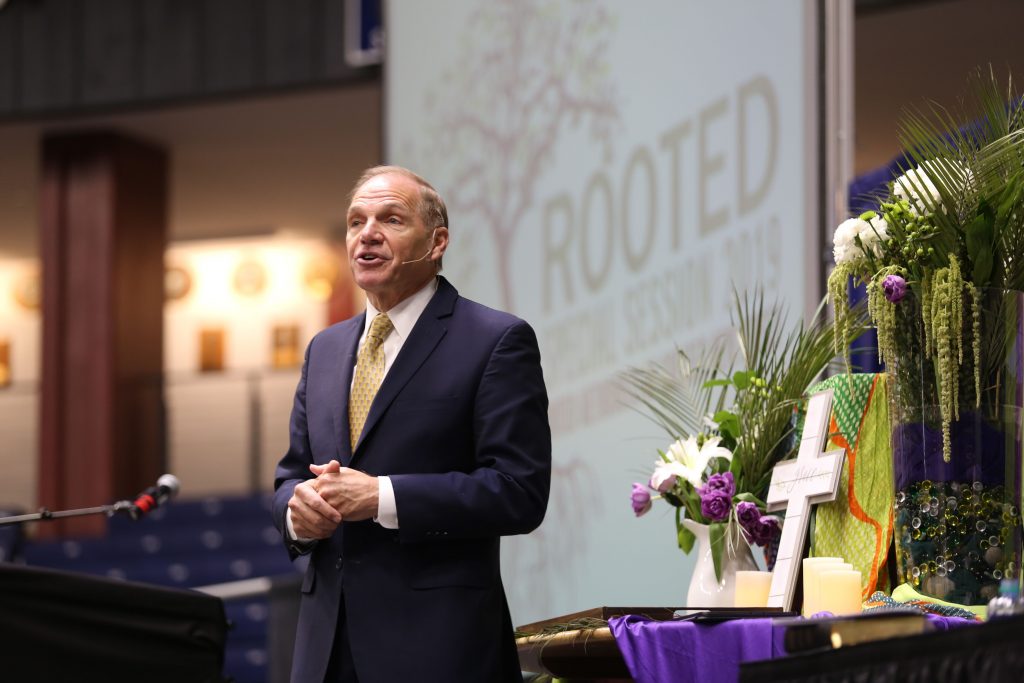 Bishop John Schol emotionally engages GNJ United Methodists at a Special Session of Annual Conference, reminding attendees that God continues to do new things even in the midst of tension and dissention. He encouraged prayer, mission and unity and called the church to love like Christ. Photo by Josh Kinney

You know how well people are connected with each other by how they engage during challenging issues.

Do the people try to convince each other of their point of view?
Do they move to problem solving?
Do they immediately go to the “rules” that govern the relationship?

Each of these tactics weaken the connection people have with each other. These tactics lower trust, reinforce barriers and narrow the opportunities for a transformative engagement where everyone grows and develops together and individually.

Jesus most often used a different engagement. He became curious. He asked questions. He took a genuine interest in the individual’s well-being. Jesus had an outward mindset.

Organizations, particularly large and diverse organizations, often try to address challenges through new policies, or task forces to solve problems, or members of the organization campaign to convince others they are “right.” These tactics were evident in The United Methodist Church at our General Conference in March.

Today I begin a three-part series about turning the church outward to engage our deepest challenge. We will look at:

The church is outwardly nice, but we don’t necessarily have an outward vision. We care about people in ways that make us comfortable. Outwardly nice is not the Gospel. In fact, it is sinful. We are nice as long as it fits into our needs rather than engaged in what the world needs. Outwardly nice does things to make ourselves feel good.

Having an outward vision means we do things to praise God and see and serve others from the needs they identify. We serve the poor or youth or other groups with what we think they need rather than asking them what they need. I may be committing heresy, but I believe that it might be better said, “do unto others as they want done,” rather than “do unto others as you would have them do unto you.”

Let’s unpack this for a moment through the lens of our current context.

The most recent General Conference session was called to find a way forward on our controversy concerning the church’s policies about engaging with and using the gifts of the LGBTQ community. Many of those involved at General Conference focused inward. The conversations, concerns and the results were inward. People took stands on one side or the other, they campaigned and they proposed new rules. The result was a policy change to address an inward vision. The policy change maintained the current exclusion of lesbian and gay people from ordination and marriage in our churches and added clear, direct and harsher punishment for those who do not follow our Book of Discipline. This led to a church that is now more polarized and inwardly focused than prior to the General Conference.

The mandate for this particular General Conference was to find a way forward that would recognize contextual differences and unify us for the mission. Instead, the action of General Conference adhered to the policies already in place and disregarded context and diversity of thought.

Another and even more damaging failure was our witness to the world. The world did not hear or witness what it means to be the body of Christ. At General Conference, people did not follow the rules, voted illegally, and knowingly approved unconstitutional legislation. Protesters proclaimed they would not follow our policies. The world is confused by The United Methodist Church. The world perceives that we are fractured around our love for God and one another, inwardly focused, discriminatory, unable to live in unity.

There is a difference between being outwardly nice and outward vision. Outwardly nice is being nice to others but still focusing on our needs. For example, outwardly nice is buying a cake for a coworker’s birthday for an office celebration, but making sure it’s a chocolate cake because that’s your personal favorite. While you are doing something nice for another person, you are more concerned about your enjoyment than the enjoyment of the one being celebrated.

Many advocates of the Traditional Plan and the One Church Plan are so deep inside their position that they can barely see each other except in the harshest and most divisive ways. They make statements that they love the other side, but these statements are like birthday cakes that are the flavor we desire. Both groups claim Jesus, but I am not sure Jesus is claiming us right now.

Most of those with Christ-like hearts who advocate for the Traditional Plan are not saying they hate or despise the LGBTQ community. Instead they are telling us to be faithful to God. They hold and live by a traditional view of the Bible. They believe if the denomination does not follow the Bible on this matter, they will bring the judgement and condemnation of God upon The United Methodist Church and weaken our mission to serve God by making disciples and transforming the world.

Most of those with Christ-like hearts who advocate for the One Church Plan are not saying they hate traditionalists or despise traditionalists. They are saying that for us to be faithful to scripture, we need to allow room for difference on this matter. They feel by not welcoming all we weaken our mission to serve God by making disciples and transforming the world.

Next time, we will look at the outward conversations that move us to being the church in which the people outside the church see Jesus.