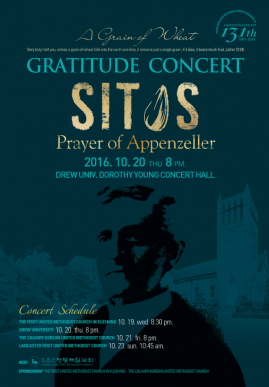 In 1885, Rev. Henry Gerhard Appenzeller, a Drew Theological Seminary graduate and ordained elder of the Methodist Episcopal Church in New Jersey, traveled to Korea and introduced Protestant Christianity to the country by establishing Chung Dong First Methodist Church in Seoul, Korea. In commemoration of its 130th Anniversary, Chung Dong First Methodist Church’s SITOS (Grain of Wheat) Cantata will be traveling from Korea to the United States and performing Gratitude Concerts at Drew Theological School and throughout United Methodist Churches in the Greater New Jersey area. All are cordially invited to attend these precious and historical performances.

572 Ryders Ln
East Brunswick, NJ 08816
Learn more about Calvary Korean UMC in East Brunswick
732-613-4930
ckumc572@gmail.com
Add to my Calendar
Do NOT follow this link or you will be banned from the site!